A fantastic alternative to sail the waters where they rhythm is set by the river itself, its winding course and its flumes.

The water has a very special attraction for all of us who like to spend time outdoors. The river courses, the cascades, the springs. All this is a synonym for purity, simplicity. Besides, it flows. We watch it run and it seems even more attractive. Since time immemorial, floating on the water surface on a boat, a ship or just an ethereal raft has been an extremely pleasant and amusing moment.

When we were invited to take part in a rafting outing organized by expert guides in Alto Palena, we instantly knew we would spend an exceptional day.

The group gathered at the joint of the Moro, Tigre and Palena Rivers. Two large colorful waters awaited the departure on the water while a picnic had been prepared by the hosts on the shore as a frugal lunch. A pleasant atmosphere was generated and we met our adventure partners.

Roberto and Álvaro were getting everything ready for the tour and Pablo contributed by preparing the fishing gear. The rest of us just waited for the instructions to set out. We put on our life jackets and found our positions on one end of the raft touching the surface of the freezing water coming down from the heights.

We sailed 10 kilometers down the Palena River floating downstream. Once in a while, the guides paddle would slightly correct the course.

Afterwards, the flumes appeared on the river bends. Whenever one was coming, we would stay alert for the movements of the craft and the rapid movement of the guide. The river was high, plentiful. Its volume made us go faster.

We enjoyed the green tinges in the high ravines that border the river. We were amidst the first mountain range in the Andes and in some areas those ravines feature very high walls whose summits cannot be seen. In some other parts, only one of the walls is visible and on the other bank there is a beach covered with green grass.

A ruddy-headed goose looked at us as if he did not care about our intrusion.

A Time to Fish

We stopped at one of the river bends, where Pablo displayed his fly-fishing-rod and we all watched his expertise. A boy of the group borrowed his rod and made an attempt to cast.

We listened to Pablo: Fishing is much more amusing when there are flumes. Whether from a raft or wading the river, the anglers just need a light gear and a good nymph or streamer.

Both rafts continued downstream up to a shelter on the left bank of the Palena, where we all got off and had a snack at the cozy cabin Jorge offers in the heart of the native forest.

Several rounds of mate amargo and a nice chat consolidated the group and we felt closer to everyone. Then we learned that the activities offered by our guides are not limited to only one discipline. They are combined in such a way that the tours include river rafting, kayaking and various kinds of fishing. Furthermore, adventurers may also enjoy horseback riding and overnight stays at cabins or camping sites.

We continued downstream towards another surprise: to our left, a cascade poured its waters into the river. Jorge went under it on its kayak without caring about how cold the water was. We seized the moment to take some pictures of him which he later thanked.

Our adventure was coming to an end when we saw a group of cabins on the shore. We knew we had reached Rincón Chico, the finishing line for our afternoon ride.
Read complete Outing... Mónica Pons / Eduardo Epifanio 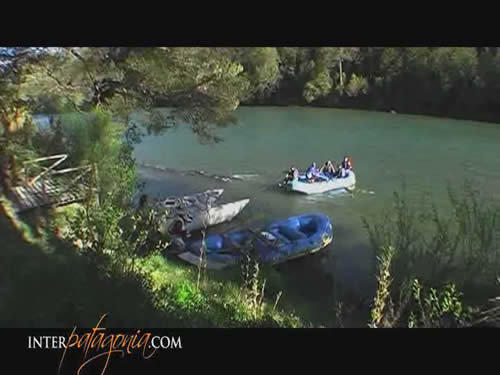