The early morning and sunset are the best times to ride across the green woodlands surrounding the town.

Feeling enthusiastic about the idea of touring along the banks of the Tigre River, we thought it would be more magical to do it on horseback.

Horseriding in the mountain range usually combines the pleasure of riding a self-assured animal around a high rocky area and the capacity to enjoy the environment. At Alto Palena, family rides are popular to see the local woodlands.

The tour began in the outskirts of town, bordering the Palena River to the area known as El Azul, where we met and greeted Elvio. His horses -Chilenito, Malacara, Ñaco and others- were waiting under the trees, tame and resigned. Elvio chose one for each of us and, we set out with the same quietness we had arrived so that we would get to know one another.

Although we were the ones holding the reins, it was them who led the way. They know each step, each geographical feature in the area and if the rider is not used to wading through a river, to going under the trees or leaving behind a huge rock, the horses will notice their lack of expertise immediately.

For an hour and a half, we rode altogether and got into a patch of wild woodland following a path where cars are not allowed. Forests made up of radales, coihues and some myrtle trees accompanied us along the Tigre River.

As we moved ahead, we saw some fantastic sandy beaches and others made of very white pebbles that have lost their original color after many winters and snowfalls. These are sites where the magnificence of nature rules and we paid our respect to it, preserving it for those who would come after us.

When we asked about the name of the river, Elvio replied that the Tigre which stands for tiger in Spanish- usually roars in some sections but he added that there are also pools where visitors may fish or swim.

A Time to Walk

Some huge rocks made us get off the horses and lead them through that area on foot.

We had not seen other human beings for a while when we came across a group of youths who had reached those beaches just like we had: on horseback. They were playing guitar with the joy typical of their young age which gave our tour a special tinge. Afterwards, a settler sawing dry wood, whom Elvio greeted by moving the handle of his whip near the brim of his leather hat, was the only other human being we came across.

As he anticipated that we were near our destination, we all asked if an hour and a half had already passed. We had lost track of time and left behind the typical rush of our city of origin.

Thus, when we reached the joint of the Tigre, the Palena and the Moro Rivers, we bade farewell to our partners and our horses in order to start another adventure on the plentiful waters of the Palena River.

The horses remained there, under the nearby trees, awaiting other riders who would take them down to those well-known and valued paths.
Read complete Outing... Mónica Pons / Eduardo Epifanio

Recommendations: Outings may be short, mid or overnight. 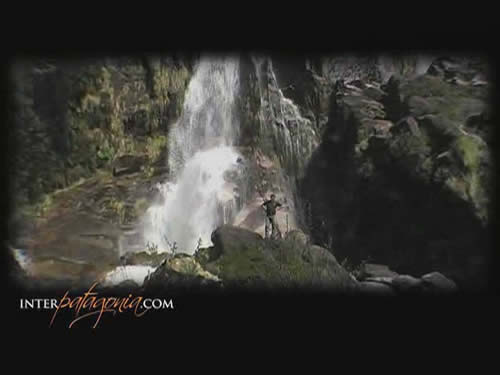