A dish prepared in a very special way. The curanto al hoyo, typical dish from Chiloé, is cooked underground during hours on end. 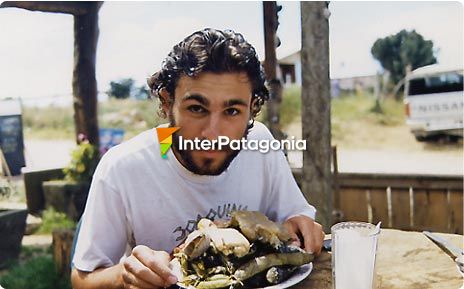 A dish prepared in a very special way. The curanto al hoyo, typical dish from Chiloé, is cooked underground during hours on end.

From the Ancud Bus Station, we took a rural bus crowded with locals heading for Quetalmahue. Anglers, seaweed pickers and small farmers inhabit this area. We asked the driver about a camping site and he suggested the Ahui beach.
We got off at a crossroad and, after a short walk, we got to our destination. A beautiful site with very quiet waters and a sandy beach. We lay on it and beheld the sight we had. On the opposite shore, we could make out the outskirts of Ancud and the road along which we hade come.
Suddenly, we were startled by the strong voice of a man who insisted on our accompanying him so that we could be introduced to some amazing locals he had just met. From the early morning, they had been preparing a typical dish from the area: the curanto al hoyo. Something that sounded totally unknown to us, so far.
If we happened to agree, this man would take us to that site at that very moment, as they were about to uncover the curanto that had been cooking underground for several hours. The offer was tempting. We said to ourselves: “Why not?” and we got on his truck. 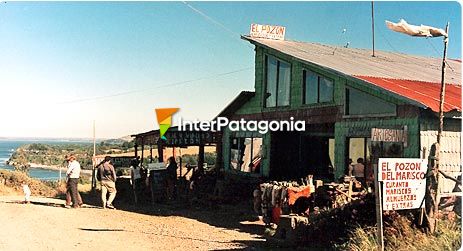 The curanto is a typical dish of mapuche origin (mapu, “land”, and che, “people”) which is practiced in all the South of Argentina and Chile.
The preparation begins with a hole in the ground, which should be about half a meter deep, and in which large hot stones are laid.
Afterwards, the seafood is added: choritos (mussels), razor clams, sea urchins, barnacles, jaibas (crab), oysters, machas, and shelled seafood. Also the meat: long pork sausage, chicken, smoked pork. All this is previously seasoned and placed next to the stones to be cooked better. Finally, the potatoes, chapaleles and milcaos are added.
Everything is covered with nalca leaves and soil panes with grass (champas) taking care that the grass faces down. The heat kept by the stones steams these ingredients for several hours.
When served, it is accompanied by a pebre, which consists of salt, water, onions, color peppers, parsley, coriander, and other condiments. 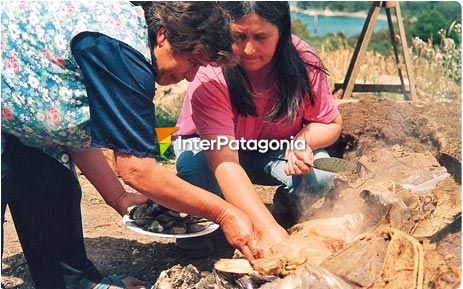 The man turned out to be a German who had lived in Santiago (Chile) for years and who was enchanted to have met these people. We arrived in the site and were introduced to these simple anglers, who received us with much warmth. Without any delay, we headed straight for the site where this dish was being cooked. The German, his two daughters and a friend of his, joined us around the curanto. It was like a ritual. Everybody was expecting and anxious to discover the taste of the new dish.
The time came, and the process started: first the panes of soil acting as a lid were removed. Afterwards, the nalca leaves were taken away. These are large leaves which function is to protect the seafood.
Once uncovered, the seafood appeared inside the hole, among the steam and the tempting aroma emanating from the curanto.
There were all kinds of seafood, pork and vegetables. We were all carefully watching the “ceremony”, until one of them told us to sit at the table.

All of us sitting at the table were served a tasty plate of curanto. Some of the seafood was unknown to us, such as the picoroco, a kind of seafood that lives inside a very hard shell.
From a kind of terrace on which we were eating, we were beholding a wonderful sight: all the sea shore, with its ravines and the strong waves.
As good Argentinians, we were first inclined for the very tasty pork. We then passed onto the seafood, which had been fished by the anglers the previous day to prepare this special dish. Everything had a spectacular taste, which we enjoyed for over one hour.

Duration: Half-day, in order to match the uncovering of the curanto.

Timetables: Generally at lunch time. The exact time is arranged with the locals. Previous reservations are required.

How to get here: Leaving Ancud along the waterfront to Lechagua (towards the Pacific Ocean), go along 14km and then take the road on the left, towards Pumillahue. Before reaching Pumillahue, you can take an irregular rubble and sandy road that leads to the Mar Brava beach (21 km from Ancud).

Put gas in your vehicle at Ancud. The road is paved only up to Quetalmahue.

Activities and Tours in Ancud