Both Argentinian and foreign sports people take part in this demanding trial and are supported by the entire town while immersed in a festive environment.

Late in August or early in September every year, San Martín de los Andes enjoys a new issue of Chapelco's Tetrathlon. This long-awaited competition has been held for over 25 years and continues to be an attraction for participants and tourists alike.

During this hard challenge, the scenery gains importance. Chapelco Mountain Range, its unbeatable trails, its native forest and the mirror of Lake Lácar give life to the competition. The circuits change every year according to the conditions of the snow, the roads and the water surface.

The starting point always lies at the top of Mount Chapelco. It is a moment filled with nervous feelings and thrills for the competitors, who have trained for a long time in order to get ready for this very moment. The ski stage requires a big physical effort and participants must carry their skis uphill at certain points, even if many of them are not used to this.

At the Base of the Mount

The four hundred participants leave their skis at the first closed park in order to start running along snowy and muddy trails. All along the circuit, the continuous presence of the people and their applause encourage racers to go on.

This discipline ends at the city's waterfront, where the competitors get on their kayaks and into the lake. This is a key moment in the competition, as many times the waves demand a big effort to avoid the winds and falling into the water.

At the beginning of the Tetra, the competitors make up a compact group. However, as the trial proceeds, the distance among them increases and thus their position in the final chart is defined.

As they get out of the cold lake waters, they change their clothes and ride their bikes along the final stretch. The accumulated tiredness impacts on trained bodies and is turned into the mental strength that lets competitors go on according to the plan each of them has previously devised.

At the end of the circuit lie the paved streets in town leading to the triumph arch of the finish line. After the effort they made during the whole race comes the exhilaration of hugging family and friends as tears struggle to be shed. Some participants have resolved to occupy the first positions and others run just for the sake of taking part in this race or to try themselves. They all have their compensation.

The Tetra keeps adding up issues and followers as far as organizers, competitors and spectators are concerned. In spite of the harsh Patagonian weather, the challenge is to beat any adversities and to prove that it continues to be "the race" of San Martín de los Andes.
Read complete Outing... Mónica Pons / Eduardo Epifanio

Recommendations: To enroll and take part in this tetrathlon, address the offices of the Chapelco Winter Resort. 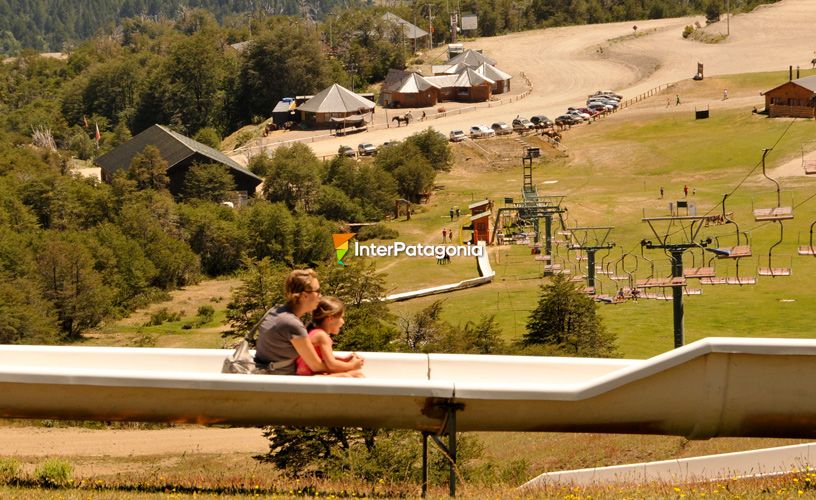 When It Is Summer in Chapelco
The mild temperatures of January and February turn Chapelco into a space for adventure in which adrenaline can flow at any age.