Travelers who have time to spare are recommended to get deep into some of the most representative nooks on the road, both on the Argentinian and the Chilean side before reaching their final destination.

Leaving San Martín de los Andes, the road leading to Hua Hum International Pass into Chile is made of rubble. This slows down the journey a little but travelers are compensated with a pleasant navigation through Lake Pirehueico, surrounded by the native forest.

We left the city without haste and with the wish to see new natural spaces. The physiognomy of the landscape gradually changed as we moved on. During the first stretch of the journey, we could see a Mapuche community located in the area known as Piedra de Trompul, well-known for the loud noise produced at a huge rock when rain or snow are forecast.

Farther ahead, the road features bends and steep slopes and the vegetation becomes lusher. Once the signs read Yuco Beach, we got deep into a trail leading to the lake in order to see this location and decide to return to these beaches. Then we drove on towards Nonthué, where there is a primitive camping site boasting shady trees on the shores of the lake bearing the same name.

As we reached Hua Hum, we visited a museum housed by a historical restored grand house. We also went for a wall around the area to see its natural beauty. We went on towards the Customs Office and carried out all the necessary proceedings. We crossed the milestone and got to the Chilean post where we filled in some other forms to enter Chile. We confirmed geographical features look very much alike at this point and that the rainfall regime makes these rainforest areas almost inaccessible.

On Board The Hua Hum

Finally, we got to Lake and Port Pirehueico to start the long-awaited voyage. We drove our vehicle on board the ferryboat and parked next to other twenty cars. Then we walked towards to the top deck to watch the surroundings. We felt very comfortable and enjoyed the fresh air on our face as well as the slow movement of the ferry across the lake of glacial origin.

As the Choshuenco Volcano appeared before us, we reached Port Fuy. The voyage was short and amusing. It took a hour and a half to join both margins of the lake. Puerto Fuy is a small district leading to other nearby urban destinations. We took some minutes to go around it, have a drink and check our maps to go on with our journey.

Our final destination was Panguipulli. As we got past Neltume, immersed in a motley forest inside the Huilo Huilo Reserve, we found two hotels of singular features: Nothofagus and Montaña Mágica. The former was built amid ancient trees intertwined in its higher branches. The latter shows an unusual cascade on one end that emerges from its top.

We took a paved road that zigzags along the shore of Lake Panguipulli and reaches the city bearing the same name after crossing Choshuenco. Likewise, visitors may choose to take the wood road, which borders Lake Neltume and heads for Coñaripe first and Villarrica and Pucón, later. The latter is a highly appreciated tourist destination both by Argentinians and Chileans.

The mountain range scenes and the crossing of Lake Pirehueico were the motivation for this magnificent journey from San Martín de los Andes into Chilean territory.

Timetables: The international pass is open year round but the ferry operates at different times according to season and weather conditions. Booking is possible only through the companys website.In general, the ferryboat ticket is paid in Chilean or Argentinian currency, or else in Dollars. However, it is safer to check with the company before reaching the ferryboat station.

Recommendations: Remember there may be a time zone difference between Argentina and Chile, depending on the season. Like in every international pass between Chile and Argentina, it is forbidden to get fresh vegetables, dairy products and meat through the border. Follow National Road 48 starting at the National Route 40 roundabout in San Martín de los Andes. The total distance to cover is 45 kilometers. 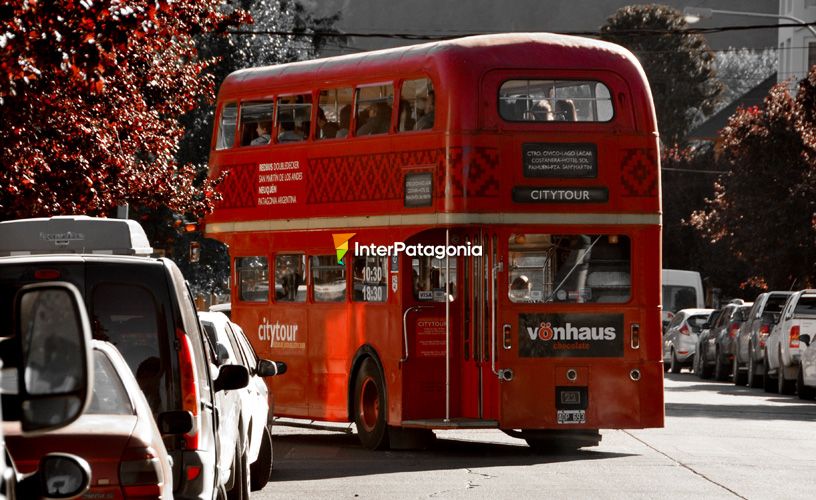 San Martín on the Redbus
The Redbus goes along the wide downtown streets, around its old tree groves and traditional buildings and becomes immersed in the daily hustle and bustle of its denizens.