The Redbus goes along the wide downtown streets, around its old tree groves and traditional buildings and becomes immersed in the daily hustle and bustle of its denizens.

The best proposal to catch a first glimpse of San Martín de los Andes is to make ourselves comfortable on board a collection bus: the Redbus. It normally shows off its red color at the main square and on the ride that connects visitors with the lifestyle of the locals.

Made in England, this double-decker Routemaster bus features a Leyland 0600 engine. It was part of the Buenos Aires Automobile Museum and for several years it has been showing off its lineage around the urban grid. A first typical detail: we got on through the back door, as people used to in former days in London.

We found our seats on the top deck to have a better view of the landscape. A guide gave us some details about the history and geography of this place. Then, we gradually discovered what the ride would show us.

We set out very slowly around the urban shell. The bus slowed down as we got past the grand houses raised during the former zenith of the city. Built in the early twentieth century, they used to belong to the steady denizens of the town. Today, a hundred years later, people still dwell in them. They are considered as architectural heritage and each of them has a story we should all listen to.

We went around the residential area today occupied by cabins, apart hotels and private houses with front gardens and lawns. Plant species introduced in the past have become thick tree groves that provide green hues to the streets and yards.

We went past public buildings and the church, the main squares and recreational places. We saw the restaurants lining Villegas Street and the most emblematic shops in the thriving city.

We went up Juez Quiroga Slope up to the former Sol de los Andes Hotel, with the aim of getting a matchless view of the city from the heights. Afterwards, we moved along the lakefront and its new facilities to take Route 40, also known as the 7-Lake Road. As soon as we took it, we discovered a spectacular view: Lake Lácar from the shore and the pier with the mountain range to the West. We made a short stop but remained on the bus to take a photo of that majestic background.

A little farther ahead, inside Lanín National Park, we spotted the access to the beach and camping site known as Catritre and the tourist resort called Paihuen.

At the end of the itinerary, we felt many of the questions we had about the city had been answered by the guides account. Besides, we were given more information about topics we had ignored so far and we had the chance to make questions about the present of this mountain village and its culture.

With its unmistakable shade of red and a patterned strip known as guarda pampa that links it to Patagonian traditions, the Redbus and its people invite everyone on a journey around the life of the city and its scenery.

Duration: 1 and a half hour approximately

Timetables: Outings year round at different times, depending on the season. 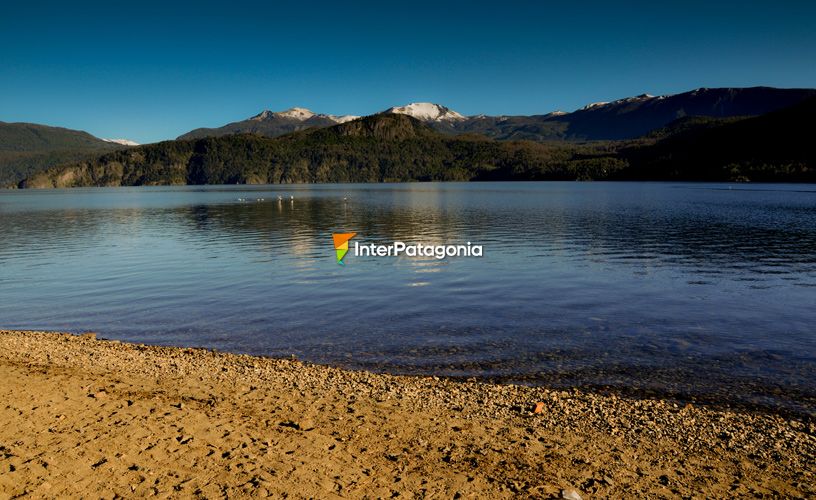