Imagination, knowledge of the materials and a previous study of the insect are the main basic principles of tying. An artificial lure can be as perfect as if an original one.

Fly Lure Expo 2009 in Junín de los Andes was an excellent frame to gather fly-fishing specialists. Two days that attracted anglers from all round the country with conferences, practical lessons and worldwide news.

We had the opportunity of chatting with two fly-tying specialists who share the same dedication and crafted technique for different purposes.

In a coquettish stand, some very real colorful insects known as hyper-realistic- caught our eye. We talked with their creator: Marcelo Malventano, a young professional enthusiast of this almost unknown technique to which he devotes almost every day of his life.

We let him talk about his passion: It is a challenge for patience, perseverance and perfection in each work of art, he said proudly. I started tying conventional fly lures and dared to tie my first hyper realistic flies after becoming familiar with the technique practiced by an English tier who really inspired me.

I copy insects faithfully, to scale, resting on a hook, just like in traditional tying. I use the same techniques, tools and materials. Color and shine must be well managed in order to classify the ties as real insects.

And he continued eagerly: A real-size insect in the proper solution for its preservation helps carrying out a deep anatomic and bibliographic study to manage the perfect copy. Everything is manual. No glue is used. Unlike other tying techniques, this one requires the use of the scalpel.

Marcelo learned to fish and tie flies in Bariloche. Years later, he found out this hobby in Buenos Aires. His passion was inspired by well-known angler Darío Pedemonte, whose creativity had no fixed patterns.

He told us that just like perfect insects are managed through the realistic technique, it would also be possible to obtain the same effects in a conventional fly lure. We bade farewell and had one last look at these pieces of invaluable hand work not used in the water but certainly representing real creations.

Afterwards, we had an interview with Guillermo Cavallieri, president of the Buenos Aires Anglers Club. A small table, a vise and several tools were the setting to tie a simple Bully Bugger, one step at a time.

Almost with his eyes closed, he got a splendid black piece with a glossy tail in just 5 minutes. It was ready to be used. We could observe the process in detail, meticulously.

The first step was to fix the hook in the vise and wrap the thread so that the material became attached. He started by the tail and chose a black marabou feather as long as the hook gap, thus determining the length of the fly.

He placed the marabou at the barb of the hook towards the front and attached it with a glossy thread, letting part of the latter fall towards the tail. In the water, it would provide an attractive reflex.

The body of the fly was made with black chenille, held and fixed alongside up to the bend of the hooks barb.

For the fly lure collar, he used Palmer hackles from the end of the fly towards the head with the hard part of a white feather. The tag end, measuring 1 ½ times the size of the hook gap, provided protection for the fly.

He tied it at the point and combed it backwards. It had plenty of volume. A special detail: he left enough chenille to wrap it up from behind and make it more even. He fixed everything with two wraps, tightened up the thread in a parallel fashion on the body.

He trimmed it with feather and wrapped the thread several times as he combed the hackle backwards. The head, conical and featuring the same size as the hooks eye, crowned the job. He tied 3 knots with a device and finished it off with lacquer paint. He explained that the finish was essential for fishing conditions not to tear the fly lure apart.

He raised his sight and said: Ready. And then he gave us a smile next to his newly tied Bully Bugger. 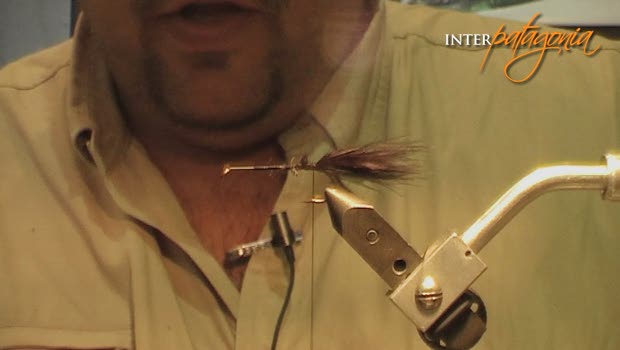