National Route 3 crosses the river Santa Cruz through one of the most important bridges in Patagonia. Between this and the secondary bridge is Pavón Island, discovered by Juan Serrano in the year... 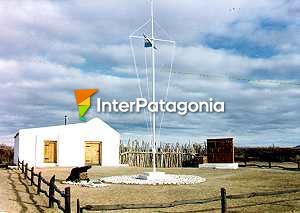 National Route 3 crosses the river Santa Cruz through one of the most important bridges in Patagonia. Between this and the secondary bridge is in Pavón Island, discovered by Juan Serrano in the year 1520, and situated 224 km. from the outlet.

This island has a double historic and recreational interest, since it is the place where Commander Luis Piedrabuena, the defender of our sovereignty in the south lived.

There is a simple museum with elements of the times of the sea pioneer, installed in the present replica of its original house.
The recreational activity is concentrated in the camping site, with fire rings and an unusual minizoo with gray foxes, red foxes and pumas distributed in big cages.
It is worth visiting the rudimentary but efficient chain pump system used to bring the water of the river to some pools, thus facilitating the irrigation of the place.
But your knowledge of the place will not be complete until you get into the history of commander Luis Piedrabuena, an emblematic figure and a permanent presence in the region.
Known as a uncomparable seaman, an untiring defender of our austral continet, sea and islands, in 1959 this man arrived to the region, a real green oasis favored by the vicinity of the river, and built a small house and a factory to barter with the aborigines. Other families soon settled on the island and were considered the first stable populations, like the family of Gregorio Ibáñez, Piedrabuena´s pilot. When he married Julia Dufour in 1868, they went to live on the island, and his wife was the first white woman who lived in Patagonia.
Piedrabuena called the island Pavón in homage to the victory of Mitre in 1861, and in the same place this visionary raised the Argentine flag for the first time.
Of this original establishment there are only ruins, which have been reconstructed.
At the entrance of the house-museum rests the Blaquely cannon, which dates from 1850.
It was originally placed in Isla de los Estados, lost, and found among bushes by the crew of a ship of the Armada Argentina in 1944.