Swimming across Lake Lácar has become one of the most popular sports events in San Martín during the summer.

Everybody knows about the beauty of the Patagonian lakes, especially those resting on the mountain range along the so-called 7-Lake Corridor. It is amazing to behold them and to sail their quiet crystal-clear cold waters. Now, daring to swim across them is a totally different matter. In the City of San Martín de los Andes, this particular aquatic deed has been practiced ever since 1985 in the scenery of Lake Lácar. It is clear that the mountain range sun, which heats the beaches in the summer, is one of the factors encouraging both residents and visitors to dare to swim across the water body.

This idea was fostered by the Physical Education professor and lifeguard Mario Vegazzi, who swam across the lake from Catritre Beach to La islita (the Little Island), both very well-known areas in the lake- on Christmas 1985. Escorted by two friends on a canoe, Mario managed to complete the circuit successfully without any previous training.

Ever since, Vegazzi has continued crossing the lake, always following the same route. Three years later, he was joined by two swimmers and friends and, by 1991, many more participants enrolled in this event, this time in the opposite direction, that is to say, leaving from La islita.

At present, this non-competitive trial is part of the calendar of activities carried out during the anniversary of San Martín de los Andes and it is supported by the municipal authorities, the National Parks Administration and Prefectura Naval Argentina. Kayaks and boats from the local nautical club help cover the safety of all participants who are accompanied by the entire community.

More and more swimmers of both genders and several age groups dare to reach the finishing line on their own. They are welcomed by a crowd on the beach, where medals and awards are delivered and a comradeship toast is made to their honor.

No matter who gets in first or last. The important thing is to complete the circuit and surpass all personal barriers defying the incredible natural surrounding of Lake Lácar, which also makes these sport practices possible.

Recommendations: If you do not feel intimidated by the cold water and wish to enjoy this adventure, just a little training and acquired swimming technique will do to take part in this experience. Contact the organizing committee to request the regulations and enrolment form.The event will take place on February 11, at 12pm. 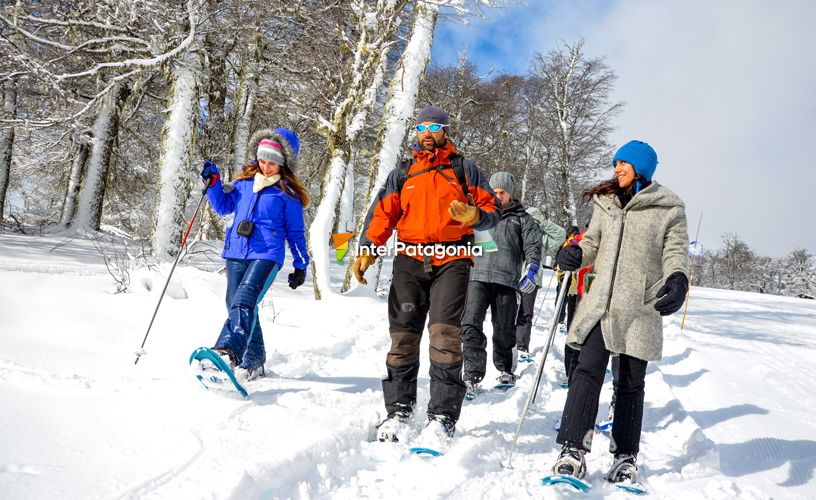 Snowshoeing at Las Pendientes
This sport is all about remote, silent nooks, fresh fallen snow and the wonderful pace of a mountain village in the winter season.