A circuit that enables visitors to get deep into the most intimate sceneries of the Patagonian nature. A zigzagging tour, specially thought for the family, that shows all the magic of the area.

I must confess that I have traveled along National Route 40, also known as the Seven-Lake Road, several times heading for Villa La Angostura or Bariloche, but I have never stopped to watch its charming landscapes. Sometimes, people who live in a certain place do not generally pay attention to local features. The daily grind prevents us from noticing these details which are new or important. Taking into account that this road is considered as the main tourist corridor in the region and that I am a travel reporter, I wanted to mend my little-big negligence, which I truly consider hard to be forgiven.

World-wide known for its matchless beauty and its attractive panoramic points, the route connects in a four-hour journey including the stops Lakes Machónico, Falkner, Villarino, Escondido, Correntoso, Espejo and Nahuel Huapi.

Lake Lácar is exempted from this list, as our tour leaves from San Martín de los Andes; had we started the trip from Bariloche or La Angostura, the lake we would not count would be the Nahuel Huapi.

All these lakes are the result of the glacier metamorphosis experimented by the region millions of years ago.
The best way to do this kind of ecursions is through a travel agency, where tourists can hire the transfer service with a guide. Thus, it is easier to stop worrying aoubt the road and deposit all the attention on what is presented before our sight.

We left San Martín de los Andes very early bordering the majestic Lake Lácar. As the shuttle advanced along the winding road, we began to leave the picturesque mountain village behind.

After five kilometers, a detour towards the right indicated the entrance to the Catritre Beach, a paradisiac site located on the shores of the lake. It has a recreational camping site with 80 sites, restrooms, showers, supplies post and a small restaurant.

A kilometer ahead, also to the right, we can see the signpost indicating the entrance Villa Quila Quina. This summer village represents one of the best natural bathing resorts in the area. It is nestled on the border of the Mapuche Curruhuinca community lands and the Lanín National Park.

We continued traveling along National Route 40, and fifteen kilometers further, we passed by the road that leads to the Chapelco ski resort. A few meters ahead, and while we were eagerly waiting to see the first of the lakes, we passed the arroyo Partido (Split Creek), so called because it opens into two branches. The one in the rigth pours into the Pacific Ocean through the Lake Lácar basin, whereas the one in the left empties into the Atlantic Ocean through the Collón Curá, Limay and Negro River basins.

The scenery of all this area is made up by the Andean Patagonian forest, formed by various notofagus species, such as lengas, coihues, radales, cypresses, raulies, ñires and robles pellín. An item to bear in mind is the season in which you take the ride. If during the fall, the surrounding scenery teems with red, ocher and orange shades; in the winter, it dresses in white; in the spring, it is flooded with bright colors; whereas in the summer, the intense green of the forest invades the sight and is even reflected on the lakes.

After several kilometers, Lake Machónico came into sight. The shuttle would stop at every lake to let us get down and take some photographs. Lake Machónico has a natural vantage point from where a captivating sight may be caught.

We resumed our march and, after 39 kilometers, counted from San Martín de los Andes, we came across the signpost that indicates the border between the Lanín and the Nahuel Huapi National Parks, two of the three protected wild areas joined by this corridor. The other national park is Los Arrayanes, that lies in the Quetrihué Peninsula, in Villa La Angostura.

At kilometer 43, the driver slowed down so that we could observe the Vuliñanco Cascade. This 35-meter-high waterfall plunges into two vertiginous arms as a result of a huge rock that divides the waters.

A few kilometers ahead, Lake Falkner appeared. At this point, the guide told us to pay attention to the mount located on the southern shore, which has impressive towers of black rock in its summit. This is Mount Buque, and condors have their nests on it. Therefore, it is possible to see their flight. On the shores of the Falkner, there is a primitive camping site which has restrooms, fire pits, supplies post and is open from November thru April.

Joined to Lake Falkner, Lake Villarino opens into the right. This time, the waters were still. A few instants were more than enough to appreciate the dimension of the lake. As my eyes observed the panoramic sight, I realized how wise nature is, to such an extent that it is capable of generating sceneries that not even the best hand of man could have chiseled.

In the twinkiling of an eye, we left it behind. We abandoned the paved road and the route turned into rubble. Almost immediately, amidst the thick foliage, we found a lake with emerald green waters: Lake Escondido (which means hidden). This spot has a small vantage point where we got off to appreciate the colors and the aromas of the forest without a glass in between.
Stops became more frequent and, with them, amazement, silence and the quietness of the mild sceneries became the protagonists.

Lake Correntoso was next. We pulled up and headed for the store to buy some homemade tortas fritas. Before setting off, I had been told about the delicious fried pastries sold there, cooked by Mapuche women. Therefore, I did not miss the chance of buying some. As it was to be expected, we suddenly felt like drinking some tasty mate, and being every inch Argentinian, a friendly hand did not take long to pour some.

Back in Route 234, we rode along the rubble road and this time we passed by one of the vantage points located over Lake Espejo, so-called for the incredible effect that is produced by the mountains, the trees and the sky on its waters, where an inverted replica of the surrounding scenery is reflected.

We soon arrived at the 100th kilomter of our tour. We passed by the cross with National Route 231, which leads to the Cardenal Samoré International Pass. This pass joins Argentina and the Puyehue area and the Panamericana Road in Chile at the same latitude as the City of Osorno.

The driver continued along the seven-lake road. Some kilometers ahead, a spectacular sight of the northern area of Lake Nahuel Huapi, the sixth largest lake in our country and the last lake in this beautiful circuit, opened up before us.

Shortly before reaching Villa la Angostura, another curious feature would be waiting for us on the way: the Correntoso River. This river joins the lake bearing the same name with the Nahuel Huapi and, due to its short length, it represents the shortest river in the world and one of the Meccas for sport anglers in search for salmonidae.

We reached Villa La Angostura. This typical mountain village has the highest level excursions, hotels and gastronomic facilities. There would not be enough words to describe the activities visitors can enjoy in this beautiful place, because imagination is broader and La Angostura lets us combine it with total freedom.
We chose to visit the pier area. Thus, we passed by the Brava (Rough) and the Mansa (Still) Bays, where we stopped to have a clearer vision of the magnitude and size of the last lake we were visiting: the Nahuel Huapi.

Timetables: To be arranged with the tourist agency. This kind of excursions usually leaves at 8.30am.

Recommendations: The excursion does not include snacks or meals; therefore, we suggest that you take some money to buy a snack at the various tourist spots, or else prepare a complete snack for the trip. Do bring an extra photo film, the sceneries are worth several shots. 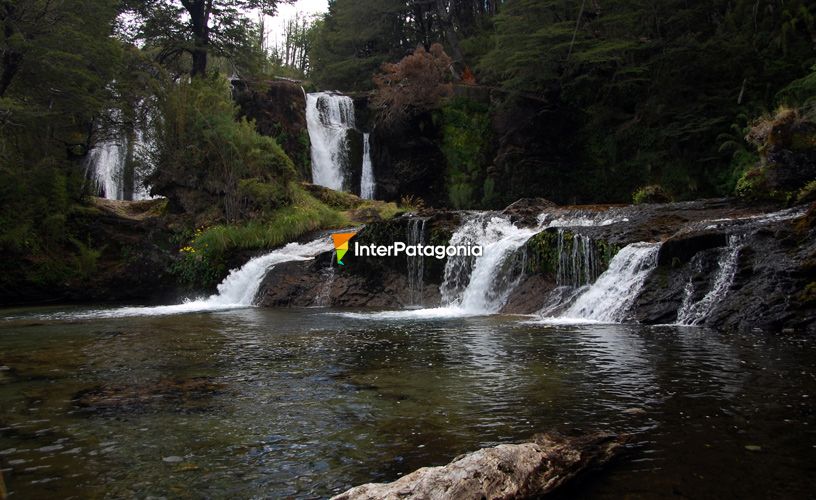 Secret Ñivinco Cascade
Very close to the traditional roads we find the wonderful Ñivinco Waterfalls, which confirm that every forest hides some mystery to be unveiled.