The German Colonial Museum is a tribute to the German immigratns. The history of Frutillar begins behind these doors.

The construction of the museum began in June 29, 1972. It was a tribute to the German immigrants who arrived in the area and, with much effort, gave their name and surname to these humid and rainy lands.

The initiative was supported by the government of Germany and the Municipality of Frutillar and had the technical assistance of Universidad Austral de Chile, whose team specially designed the layout with the purpose of recreating the settlements of the first colonists. That is why it is located on a hill opposite the lake and is divided into five typical constructions, all of them made of wood and tiles and distributed in the same way as in the old estancia shells. They have very beautiful gardens with hundred-year-old trees. The furniture preserves most of the objects used by the first colonists.

The first building, the closest to the entrance, is called La Llavería. This is a small construction housing the venue's administrative offices.

Farther ahead, an old watermill which was moved from the lake shore can be seen. The water of a wooden canal moves its wheels and its inside shelters the machinery and the large rocks that used to grind the flour. This is an icon of the so many watermills that existed in the area and which produced enough flour for the entire population.

Following the tour, we came across La Casa del Herrero, where the machinery and tools used by the first colonists to carry out agricultural tasks can be seen. Each of the rooms represents the daily routine of colonist families in detail, with a firewood kitchen and other original pieces of furniture from the period portrayed. As well, a descendant of these colonists is in charge of engraving visitors' names on small horseshoes.

Farther ahead, a circular agricultural shed indicated that we were at El Campanario. Sheaves of wheat were stock-piled there to be threshed indoors due to the great number of rainfalls hitting Frutillar and its surroundings every year. Inside the bell tower, typical agricultural and domestic machinery from those days can be observed.

Lastly, we arrived in the Casa Patronal, a countryside house built on a hill in 1889. Its appearance and height perfectly evidence the economic peak of the German agricultors in those days. Inside, we found objects and tools original from the XIXth century. It has large rooms, a kitchen, a music room, a winter garden, bedrooms and bathrooms that invite visitors to imagine the lifestyles of these families from a very close distance.

Recommendations: The German Colonial Museum is ideal to be visited with the family. The objects and tools used in the times of immigration are an invitation to think about how hard life was in those days and how nowadays -sometimes excessive- technology has solved so many daily problems. Located in the center of Frutillar. 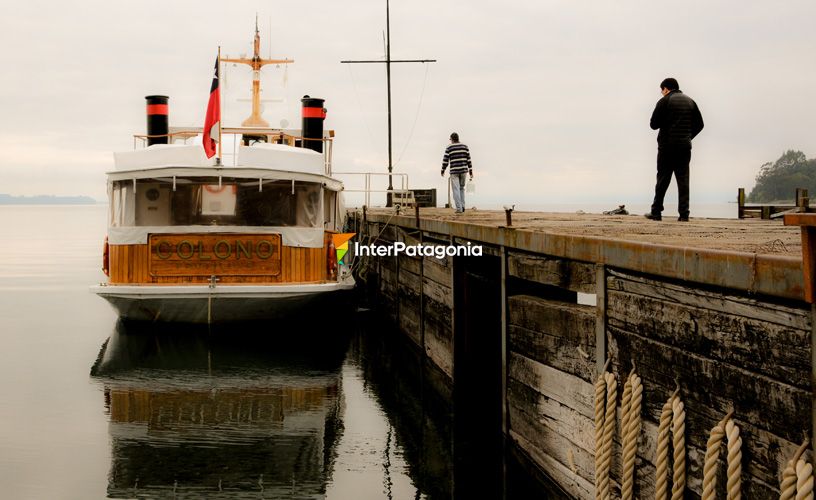 Welcome on Board
Sailing across the lake surrounded by the whimsical shores and the constant volcanoes unveils a magnificent perspective from a different angle.