Lamb on an open fire in Lago Verde

A master class on how to prepare lamb in a pit or metal cross on an open fire dictated by an authentic man from the countryside. As the cooking process went on, we waited by the fire not to miss any detail of the explanation. 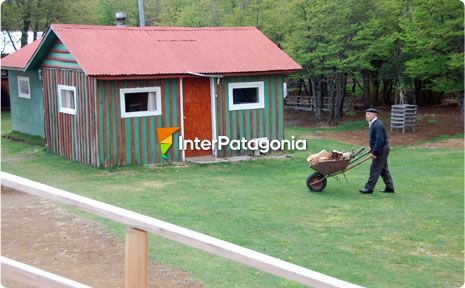 Watching is not enough. It is necessary to put shoulders to the wheel and to complete each of the steps in the cooking of meat, just like an expert in asado taught us.

It is easy to tell when a person puts all their heart and knowledge to serve their friends a good meal. Preparing lamb in an open fire is a long process and much attention must be paid to every single detail.

Sergio Balboa is a well-known neighbor in Lago Verde. A countryside man, he has lived in this town for many years and has witnessed the beginnings of this rural settlement and seen it develop into what it is today.

He invited us to share asado at his new quincho, Churrasco Quemado, and there we went at the time we had arranged.

Everyone calls him don Checho and we found him adding pebre to the lamb. Pebre is a dressing similar to the Argentinian chimichurri. It gives grilled meat an excellent taste.

We suggested his telling us about the process “step by step” and he shared his expertise with us. The previous preparation of the meat and the fire are the basis for good cooking. Also, a great dose of patience and observation should be added to it.

He said it was essential to have a young animal which had been fed with good pastures. Once slaughtered, it should be left in the open air for a few hours and its ribs marked by grasping it tightly to an iron cross.

The choice of the wood is also of extreme importance: it has to be dry and hard for the heat to be intense. Fire must turn into charcoal before it is put under the cross, which must be stuck in the ground in a slant position.

“The cross must be placed as near the charcoal as necessary so that the heat begins to cook the meat; the ribs are cooked first. Cooking must not be hurried and the flame should not fade”, don Checho added. 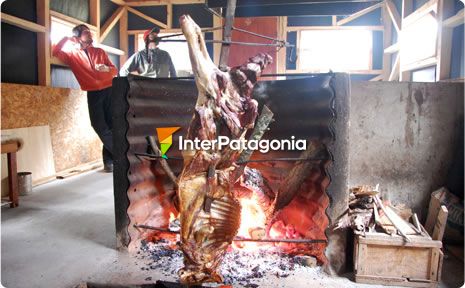 Somebody contributed a wine skin made of goat leather of Spanish origin, more precisely from Pamplona. It has been adopted to drink wine in the countryside and to compete in the ceremony of aiming the reddish spurt straight to the throat. Don Checho and other three men showed off. The rest of us chose to drink from the traditional glass.

In the meantime, the secondary fire was incorporated in the form of charcoal to the main fire. At the right moment, the ribs were turned around to show the other face. Almost three hours had passed without even noticing it.

Conversation revolved around the history of town and many interesting anecdotes came up.

We asked about other local specialties and he answered: heifer head grilled under the soil. He told us it is wrapped up in a wet burlap cloth on hot rocks. Another recipe to learn on our next visit. 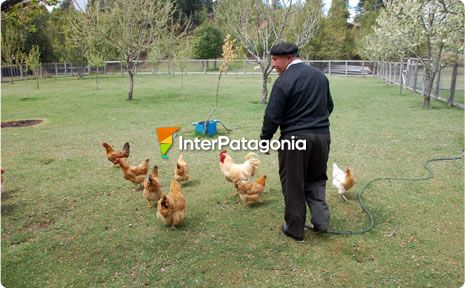 When the lamb was ready, don Checho invited us to approach the fire and he offered his own knife to the main guest and encouraged him to cut the first piece of meat. A sign of courtesy of the host and a tradition in the area.

Activities and Tours in Lago Verde