Touring around the farms

At the national capital of cherries, we could not miss a visit to the farms producing jams and other regional delicacies. 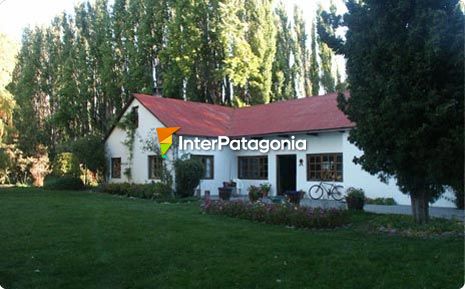 At the national capital of cherries, we could not miss a visit to the farms producing jams and other regional delicacies.

A mandatory tour in this pictouresque town on the border with Chile, the farms scattered in the outskirts of the urban shell represent the history and the present of their settlers. With various infrastructures and technical resources, these undertakings specially devoted to the growing of fine fruit produce jams, liqueurs and pickles characteristic of the region.


The hard work of the families who could overcome the catastrophe caused by the eruption of the Hudson Volcano in Chile in 1991 is reflected in these venues. Some people still remember the volcanic ash rain which surpassed one meter in some areas surrounding Lake Buenos Aires, covering Los Antiguos and Perito Moreno, among other districts of Santa Cruz. Many had to be evacuated, and a large part of the sheep cattle which sustained the area was lost and the strawberry, raspberry and vegetable crops, among others, were destroyed.


After fighting the adverse effects of the natural disaster and as a consequence of the micro climate the region enjoys, its dwellers could face the aridity of the steppe and start the fine fruit production once more.


Today, Los Antiguos is known as the national capital of cherries, whose festival day is celebrated every January when producers compete with their best jams.


Willing to know and taste the fruit produced at these farms, I got a map to visit El Paraíso and Don Neno. 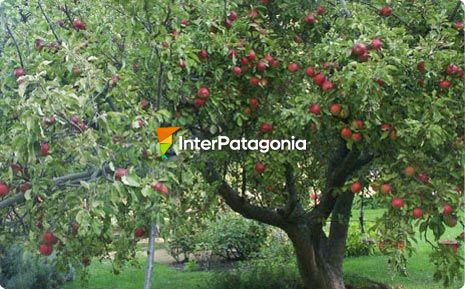 I crossed the bridge over the Los Antiguos River and continued towards the border. I turned right into the detour before the gendarmery guard post and followed the signposts reading “El Paraíso”.


The sun was shining on the golden poplars of the fall which bordered the house where I was welcomed by Myriam Amand de Mendieta. Her in-laws had bought the farm in 1951 to sow alfalfa and they had only planted some apple trees for their own consumption. It was not until 1975 that they decided to plant the first cherry trees in order to sell the fruit. When desertification caused the price of alfalfa to drop, the production of fine fruit jumped into the first position.


Today, they have 48 cultivated hectares, and 12 of them are planted only with cherry trees. They are mainly devoted to the production of cherries, hazelnuts, apples, plums, pears and apricots.


The same happened with the jams. First, Myriam began to make them following her mother's recipes and for the consumption of a family that was getting bigger and bigger. Afterwards, she began to commercialize them and she was really successful. 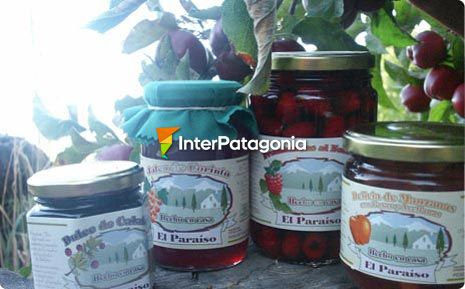 In the house, the main hall displays her original creations: pears in vinegar, apple jam with hazelnuts and raisins, apricot marmalade, Myriam's favorite.


Winner of the best cherry jam in 2004 and the best garden farm in 2005, the El Paraíso jams are tasted on the tea tables of Los Notros, the distinguished inn at El Calafate, among other very select places.


It is best to visit it in the summer and tour the contryside with Miryam's grandchildren -who act as guides-, walk up to the milestone on the border and reach the Jeinimeni River vantage point. And before leaving, it is a good idea to gather enough jars of jam, pickles and liqueur until the next visit to the farm. You will not regret it!


Inside the urban shell, where San Martín Street ends, lies this farm which belongs to the Treffinger Family. As I entered, Malú, who was making mushroom pickles, called her 12-year-old daughter, María Soledad. I toured the orchard with her and saw season vegetables and the strawberry fields where three varieties of strawberries are grown.


We came across her sister Camila, who was guiding some tourists through the plantations. Soledad told me that her family had lost all the sheep during the eruption of the Hudson Volcano and that some years after they had left, they returned to Los Antiguos in 1997 to relaunch the farm. 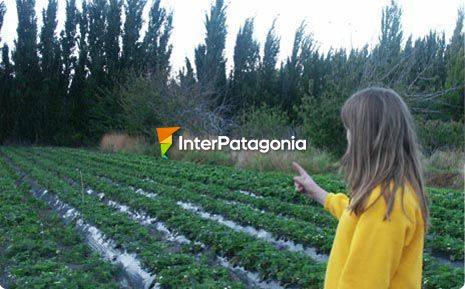 Walter Treffinger, who had inherited the lands from a Bulgarian old man called Neno in 1976, is in charge of the production and his wife Malú and the girls make jams, exotic liqueurs and delicious tarts which they offer to tourists after a tour around the farm. As it was to be expected, I tasted the house specialty: an exquisite wine liqueur with almonds that Malú rescued from an old recipe her father had given her. They would also offer new products such as green tomato jam with nuts and rose liqueur, as well as homemade dulce de leche (milk jam).


It was already dark when I said good-bye to the Treffingers. Next time, I hope to get there in the right season and harvest my own strawberries. I also hope to taste the tempting tarts made and served by Camila on the little tables of the garden crowded with flowers.


There are a thousand reasons to go back and visit the other farms open to tourists. Undoubtedly, this will happen when the scenery turns red again and the 150 hectares cultivated with fruit are full once more in Los Antiguos.

El Paraiso: jams, pickles, liqueurs. Open hours: from 8am to 1pm and from 3pm to 8pm, everyday. Jams and marmalades from .
Don Neno: jams, liqueurs, season vegetables. Timetables to be defined, everyday. Liqueurs and jams from .


Activities and Tours in Los Antiguos