On horseback, we visited one of the most emblematic cattle ranches in Puerto Natales. Amidst cliffs and little pampas, the scenery led us to the well-known Mylodon Cave.

Southern Patagonia has an extremely variable weather. The four seasons may be experienced in a matter of hours. The grey clouds on the horizon would forecast that a storm was coming. But following the premise that the area is totally unpredictable, we dared to travel to the Puerto Consuelo estancia, where we were being expected in order to set out on a horseback excursion.

Located 25 kilometers to the North of Puerto Natales, Puerto Consuelo was the first cattle ranch to be established in the area, around 1893 by the Eberhards, a German family. Lying on the fjord bearing the same name, it occupies more than five thousand hectares of pampa and forests spreading from the gulf itself to the Mylodon Cave Natural

Monument, discovered by the German family in 1895.
We arrived and, still on the vehicle, I realized that the area offered beautiful panoramic views made up by mountains, fjords and the sea. The eagerness to go beyond my senses prevented me from hesitating: I put on the polainas and started to ride.

Gustavo Souper and his wife Heidi Ryan were in charge of welcoming us. They both founded the Estancia Travel company, which organizes horseback excursions across the Chilean Patagonia. They are both expert riders -riding champions in national tournaments for two years in a row and they have decided to combine their passion for horses with their knowledge of Southern Chile thus creating memorable equestrian rides, with suitable programs both for beginners and expert riders .

In this opportunity and taking into account the dark clouds, we chose the half-day horseback excursion to the Mylodon Cave.

We met don Pedro, the local that escorts Gustavo in the horseback excursions. His good mood would eclipse his face, hardened by his almost 70 years of age. His laborious hands got all the horses ready in no time. Excellent riding harnesses, made up by Chilean, Texan or English saddles and reins, would look stunning in the Creole horses that were an invitation for us to become riders.

The estancia Travel horses are reliable, have good reins and are in excellent shape because they are moved about with a rope when they do not leave on excursions.
You are going to ride ´Halley`, like the comet pointed out Gustavo. We have horses with various characters and knowledge, which are assigned according to the riders' experience added our guide, as he handed me the riding helmet.

In the last minute, two English tourists joined the ride: Jane and Mary, her mother. Introductions made, we set out on our horses heading for the cave.

You are going to ride ´Halley`, like the comet pointed out Gustavo. We have horses with various characters and knowledge, which are assigned according to the riders' experience added our guide, as he handed me the riding helmet.

In the last minute, two English tourists joined the ride: Jane and Mary, her mother. Introductions made, we set out on our horses heading for the cave.

In Search for the Missing Link

At a good pace, we left the Eberhards' estancia behind. We started to cross a pampa that would slowly get lost into a leafy lenga grove, making a strong contrast. The vegetation was made up by lengas, cohiues, ñires and bushes such as the leñadura, chaura, fire bushes, calafate, michay and siete camisas.

Mary was not an expert rider. Fortunately for her, the guide -who has great expertise in the matter- offered his help and instruction when necessary. Thus, we all enjoyed the excursion.

We climbed a cliff in order to catch a good sight of the area. We watched the Señoret channel and the shore opposite the Última Esperanza Inlet. We turned around and faced Mount Prat, the De los Muertos Island and the Western slope of Mount Benítez, where the Mylodon Cave and another rock fromation called Silla del Diablo (The Devil's Chair) are located.

As Jane and I were more experienced, Gustavo invited us to gallop, while Pedro would stay behind for a few minutes to escort Mary.

At great speed, we rode across the vast field, feeling the steady pace of the animal every time its hoofs would make contact with the ground. We slowed down and, as we were waiting for the rest to catch up, Gustavo told us about some of the features of the cave we were about to visit.

The Mylodon Cave is a sample of a decomposition process of a shale rocky layer, which gave shape to this kind of landscape by the action of the waters of a great lake explained Gustavo Souper.

As it was, pieces of skin, bones and other remains of an unknown animal, identified with the name of mylodon were found inside that cave.

The mylodon was a mammal of the xenarthra order, with herbivorous habits and plantigrade gait. Its remains have been found at various levels of depth, which implies that the cave was inhabitted by these animals until they became the contemporaries of the first primitive hunters he added. By then, and without noticing, we were in front of the cave.

We tied our horses to a hitching post and, after paying the entrance ticket, we entered the venue. This place is under the administration of the Corporación Nacional Forestal (National Forest Corporation) and was declared historical monument in 1968 and natural monument in 1993.

The cave is about 150 meters from the entrance and has large dimensions: thirty meters of height, eighty meters of width and two hundred meters of length.

We walked into it appreciating the stalactites hanging from the roof. A statue recreating the real size of the mylodon caught our attention and the photo shots multiplied. It was huge asserted Jane, as we posed next to the plaster mylodon for the picture.

After visiting the venue and before going back to the estancia, Gustavo invited us to taste some delicious snacks at the restaurant located opposite the entrance to the path leading to the cave.

Finally, we rode our horses once again and started our way back. Now, the dark clouds were covering the sky.

Some drops began to fall shyly on us and we headed for the estancia in a rush. The smell of the wet soil, the grey panoramic sights of the surroundings, the mylodon, the English women, Gustavo, don Pedro, the silence, the Patagonian wind and the horses are part of our memories... and of the eagerness to go back.
Read complete Outing... Marcelo Sola / Marcelo Sola

Timetables: Excursions leave everyday from 9am to 2pm and from 4pm to 9pm.

How to get here: A shuttle from Estancia Travel picks up visitors at the hotels where they are lodged. 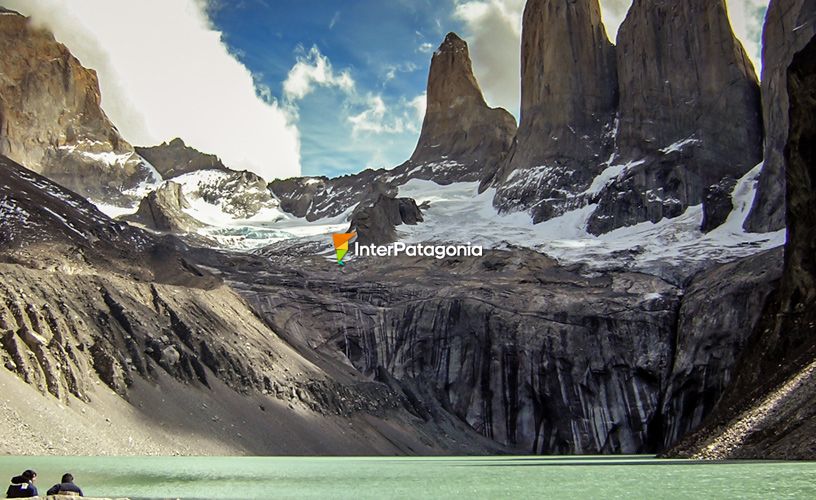 Land of Giants
Both colossal and unique, the Torres del Paine rise in Southern Chilean Patagonia in a superb mood over the surrounding landscape.