A voyage amongst eternal ice and drowsy nature. We sailed amidst the Patagonian fjords up to the Balmaceda and Serrano glaciers in the Bernardo O´Higgins National Park. 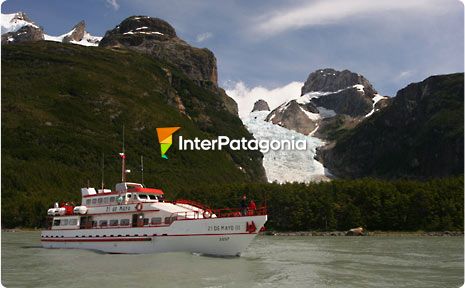 A voyage amongst eternal ice and drowsy nature. We sailed amidst the Patagonian fjords up to the Balmaceda and Serrano glaciers in the Bernardo O´Higgins National Park.

There is no doubt that beholding the glaciers is one of the most dazzling experiences man can enjoy on Earth. Maybe because they are millions of years old, maybe because of the various shades they acquire when exposed to sunlight, maybe because visiting them represents an entire voyage around these latitudes, or maybe simply because their whimsical shapes and monumental size make us think only a superior force might have created them. The truth is that thousands of people from all round the world spend considerable amounts of money in order to appreciate them.
Being so close to the Southern Ice Field, the third world fresh water reserve, it is impossible not to be tempted by the possibility of accessing some of the glaciers that give shape to it. Very early, the “21 de Mayo” and “Alberto De Agostini” ships leave from the Puerto Natales official pier towards the Balmaceda and Serrano Glaciers. Being only mortal, I could not escape temptation and was one of the first people to get on board. Besides, the voyage takes the passengers across the Bernardo de O'Higgins National Park, the largest in Chile with its 3,525,901 hectares of total surface. 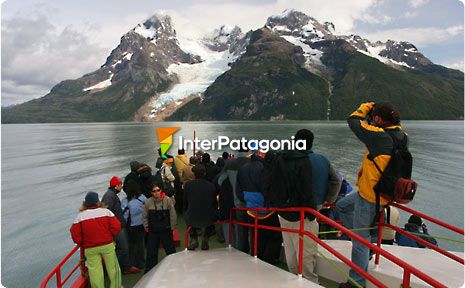 Amidst the Patagonian Fjords

We set sail. In the distance, I observed Mount Balmaceda, whose impressive figure stands out from the surrounding scenery. The small and swaying craft moved without hurry across the Última Esperanza Inlet and, within a few minutes, we were sailing along the legendary Patagonian channels. Unfortunately, the weather was not what we had expected for the excursion; grey clouds, rough winds from the Pacific and a constant cold drizzle would not forecast a good day. “Every cloud has a silver lining” I thought and, as I put on some warm clothes, I went out to deck in order to watch our tour more closely.

I was surprised by the thick vegetation carpeting the mountains up to the water's edge. Among the rough landscape, huge cascades of thaw water would fall and generate a sound as deafening as unique.
The Patagonian wind, wandering spirit of the South, could not be absent. A cold gust circulated among us and it seemed to cut through our skin as a sharp knife. Without hesitating, I resolved to get into the cabin. Through the loudspeakers, the ship guide would describe the various sites we visited, which we could hardly watch through the wet window. After two hours navigating, the ship approached the “Barrosa” point, home of a cormorant colony. These birds, whose appearance resembles that of penguins, stay in this spot for three months during the summer until their young learn to fly. 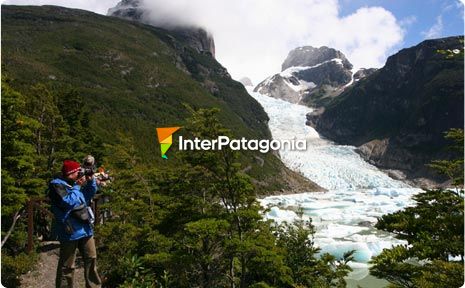 As we advanced among the fjords, the scenery became wilder and more atractive with its vigorous mountains. Meanwhile, time seemed to pass slowly. A total of three swaying hours awaited us before we could reach the Balmaceda glacier.

Once more, majestic Mount Balmaceda reappeared; this time, on the bow of the ship next to the glacier bearing the same name, which was calving in the East. This mount is 2,035 meters high and there is few background information as to having been climbed up to its summit. The glacier is in the same receeding condition as most glaciers on the planet. I looked at it with a little sadness. That phenomenon made me think about global warming, which in short contributes to the melting of these ice colossus. Some minutes of beholding were more than enough to appreciate its countles shades of blue.

The “21 de Mayo” continued her course, now without any stops, up to the Serrano Glacier. The craft is a cutter measuring 20 meters of length and 5 meters of breadth. It has a 360 HP Volvo engine and can accommodate 50 passengers. In the inside, the bar offers mineral water, soft drinks, beer and, obviously, pisco sour. In order to calm down the anxiety felt at lunchtime, thick bars of chocolate can be bought on board, although the swinging movement of the ship does not guarantee a successful sale.

After navigating for 4 hours, we tied up at the Puerto Toro pier, in the core of the national park. We began to hike along a 1,000-meter-long path through a wonderful native forest and along the coastline of Lake Serrano. The local flora is made up by perennial forests, where the coihue trees predominate. I did not take long to be amazed at the large amount of ice floes floating adrift on the milky waters. I continued walking with the rest of the excursionists. A strange silence took hold of us all. As we approached the glacier, I would be astonished to watch how the perspective would be enlarged at every step.

The ice wall is approximately 20 meters high, whereas the impressive glacial tongue gets lost in the white horizon, with the rest of the small glaciers that make up its basin.
Suddenly, an enormous block from the ice wall slowly detached from the glacier... Everyone's attention focused on the terrible and magnificent show of nature which dived into the cold waters of the lake in one instant, generating a monstruous roar and a 2-meter-high wave. I was flabbergasted as I tried to convey the scene in my mind. I was aware that the very fact of recalling that moment would make my hair stand on end and I wanted to preserve that image forever. The unforeseen calving, the roar and the wave were followed by a general applause. I looked up to the sky and without finding anything in it, I thanked our Maker for the opportunity of witnessing to such event in a grey rainy day.

Duration: 8 hours in all

Timetables: Navigation to the Balmaceda and Serrano Glaciers leave every Wednesday at 8.00 in the morning from the Puerto Natales official pier.

As the weather conditions are quite variable in this area, I recommend that you wear warm clothes, if possible waterproof garments with Gore-Tex lining. In order to enjoy the hike, it is best to wear hiking boots or some hard footwear. Take it easy during the ride. It is only by suppressing eagerness that you will be able to enjoy what nature has to

Activities and Tours in Puerto Natales

Hotels and accommodations in Puerto Natales