Can someone fall in love with a place and leave everything else behind? Can a person choose the destiny of others unintentionally? A tea house, a small mountain village and a great deal of magic.

The passing of time teaches us to look, think and live in a different way. For many people, experience is gained through the accumulation of years, decades, children and grandchildren. It is thanks to experience that human beings learn to notice countless things, even how magic works.

What is magic? Does magic really exist? When we talk about magic, we do not mean wands or rabbits or black top hats or to those who deceive people with perfectly managed illusions for a living.

Lets speak about a different kind of magic. We will try to be more explicit. This magic refers to those sites that look magical in a literal way, which have one or more supernatural qualities that are hard or rather impossible to explain for us, humans. Those sites are on the edge and after we visit them, they make us think about the true sense of our lives and where we go from there.

Something like that was what came to Renée Dickinsons mind back in 1936. This young English womans adventurous spirit led her to the small mountain village in San Martín de los Andes when she was just 26 years old. She was fascinated by a meadow featuring amazing views of Lake Lácar and the Andes Mountain Range.

She was a model at the well-known department store called Harrods and wanted to become an actress. She had had minor roles in some movies. Nothing transcendent. However, when she saw this place, her destiny changed completely.

She contacted the office of National Parks and learned she could buy a 3-hectare piece of land to carry out a tourist undertaking. She had no idea of what she was going to do but she felt it was necessary to do something there.

Magic lured her to this place. She had to stay there and even without even imagining it, her decision would change the life of her brother Barney and her future niece Janet forever.

Once she got the authorization from National Parks, Renée started to build a tea house and inn -one of the first ones to lodge visitors in this area- and she called the venue Arrayán (Chilean Myrtle). The name was suggested by one of her closest friends, as Renées body build was very similar to that trees. She was tall and thin and her hair was red like the Chilean Myrtle tree bark. Curiously, in the Mapuche tongue, arrayán means the place where the last sun beams fall.

Renées pioneer and adventurous spirit was quite unlucky in the matters of the heart and health. After a marriage that lasted barely a year (she married an English journalist in Uruguay) because her husband did not wish to live in the mountains, an unexpected cancer put an end to her life in 1943, when she was just 34.

Barney Dickinson, her brother, was a pilot in the Royal Air Force. He and his wife took charge of Arrayán and resolved to keep Renées dream going. They put a lot of effort and dedication to turn the tea house and small but popular inn into an emblematic site in San Martín de los Andes.

When WWI started, Barney had to travel to Europe and enlist. He left everything under the care of his father, his wife and his small daughter Janet. Once the war was over, Barney returned to Argentina. He retired as a pilot and joined the family dream. He soon became a member of the community of the thriving city and a referent of mountaineering and ski as one of the pioneer instructors in Mount Chapelco.

A lover of literature and a true expert on the aftermaths of the war, Bernardo Dickinson (Barney among his friends) transmitted his enthusiasm for ski and his passion for reading to his daughter Janet, who would slowly take over the inn and tea house as her parents grew old and tired.

Janet had been a ski instructor in Bariloche until San Martín de los Andes opened its own winter resort: Mount Chapelco. In addition to that steady job, which lures tourists and generates work during the entire winter, Janet had learned European recipes from her mother. Thus, the beverages and cakes served at the tea house made it a must visit for travelers in the area.

From 1978 to 1999, the conflict with Chile prevented tourists from visiting Patagonia. During this period, Janet led Arrayán to its greatest splendor and fullest recognition. A clear example of this is that it was declared historical and architectural heritage of the City of San Martín de los Andes in 1995.

Janet sold the property to its present owners before the year 2000. History goes that she devoted herself to another passion: literature. This beautiful art, passed on by her father, inspired her to write stories, poetry and novels and to socialize with other artists and life deeds as remarkable as hers. She died recently, in 2015.

Today, almost 80 years after a young 26-year-old English lady was dazzled by this place, Arrayán still preserves its magic. It was the same one that captivated Renée, followed with her brother Barney and finally became rooted in the heart of her niece Janet.

Some sites have the power to change people and they always await new adventurers to save them from routine, to touch them with their magic wand, with their top hat or their lucky rabbit. And after that, nothing will be the same again.

Minutes away from San Martín de los Andes, Arrayán  Tea House and Inn, was inaugurated in 1939. The architectural project was carried out by Mr. Cullen, one of the disciples of famous Alejandro Bustillo. Today, almost 80 years later, this site unfolds for visitors to find out the same features that captivated Renée and its present owner: Raúl Pont Lezica. He has resolved to continue letting the magic that dwells in this place enchant both tourists and denizens of the this eye-catching city called San Martín de los Andes.

Almost 80 years after it opened its gates, Arrayan continues to be one of the referents of tea tradition in San Martín de los Andes. Its main house and its view points have been visited by thousands of newly-wed couples on their honeymoon and still await many others. The main house has been declared historical and architectural heritage of the city and every afternoon, it hosts the ritual of English tea, which extends until the last sun beams fade away, before everything becomes gloomy and the endless lights of San Martín de los Andes begin to twinkle.
Read complete Outing... Pablo Etchevers / Eduardo Epifanio 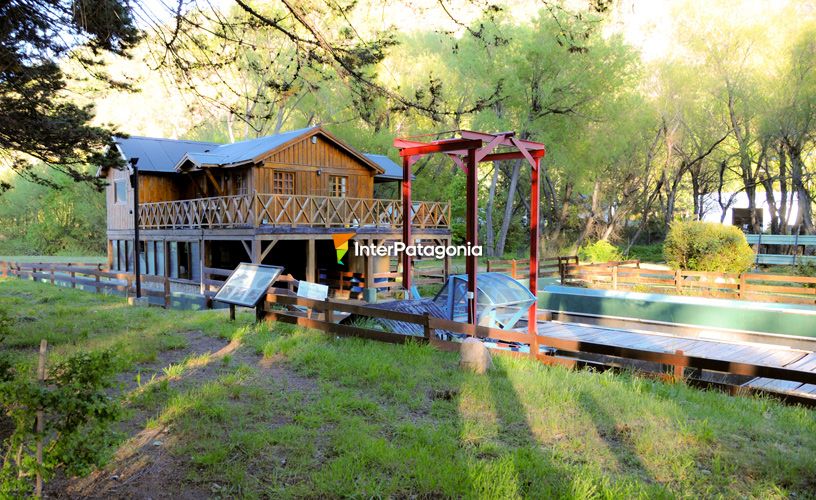