The large spaces occupied by the Lanín National Park give shelter to diverse sceneries and beautiful natural environments. Very close to Junín de los Andes, lies the Curruhué area, a particular lake zone with thick vegetation, volcanoes and hot spring wells.
We left San Martín de los Andes early in the sunny morning, accompanied by Santiago. We took Route 234 and, a short distance before accessing Junín, we took a duly signaled detour along a rubble road.

A few kilometers ahead, we came across the park station. There, Sebastián, the park ranger in charge of this district, provided us with complete information about the area of the park we were going to visit.

The area of the Curruhué, a word that means dark place in the Mapuche tongue, includes 44 thousand hectares marked by a past of strong volcanic activity.

From that spot, we continued traveling 4 kilometers more along the path up to Lake Curruhué Chico. The quietness of this water body is only disturbed by some ducks. Navigation is forbidden in this lake but fly-fishing and camping are permitted. A strategic panoramic point enables visitors to watch local birds and the admirable landscape.

A little farther ahead, before reaching the Curruhué Grande, we stopped for a short walk around a monkey-puzzle forest up to the vantage point. A 400-meter-long trail opens up amidst these beautiful ancient conifers and leads to a panoramic point from where the strict natural reserve, situated on the northern shore of the lake, may be observed.

The Curruhué Grande stands 950 m.a.s.l. and is 17 thousand meters wide. A primitive camping site lies at one of its ends, where there is a large and quiet beach which became an ideal place to improvise a pic-nic. We bordered the river bearing the same name and once in the Verde Lagoon, we made out the escorial -a solidified lava river- and the Ayen Niyeu Volcano.

Afterwards, we visited the Escorial and Del Toro Lagoons, which lay hidden amidst the vegetation which was growing thicker and thicker.

We returned to the road and crossed the escorial, an incredible river of petrified lava that gets submerged in Lake Epulafquen. Should we cross that strange formation of black porous rocks, where some whimsical bushes grow up, we would be able to see the old Epulafquen station.

But instead, we headed towards the Carilafquen Cascade, which had been recommended by the park ranger. It was totally worthwhile, even if we had to trek along quite a narrow trail. The fresh quiet waters would descend along large rocks up to the lake. We had a short break to freshen up and enjoy this natural nook.

The sun was setting behind the mountains when we reached the Carirriñe Pass. On our way back, we stopped at the Lahuen Có hot spring resort. This is an excellent excuse to continue touring and enjoying this area of the Lanín National Park.
Read complete Outing... Mónica Pons / Eduardo Epifanio

Recommendations: Detour into Provincial Route 62 leaves from National Route 234, 4 km before accessing Junín de los Andes from San Martín de los Andes. This is a signaled dirt road. Another choice is to take the same route from Lake Lolog.The Curruhué beach is beautiful for camping or spending the day. Carry supplies because the infrastructure is quite basic. 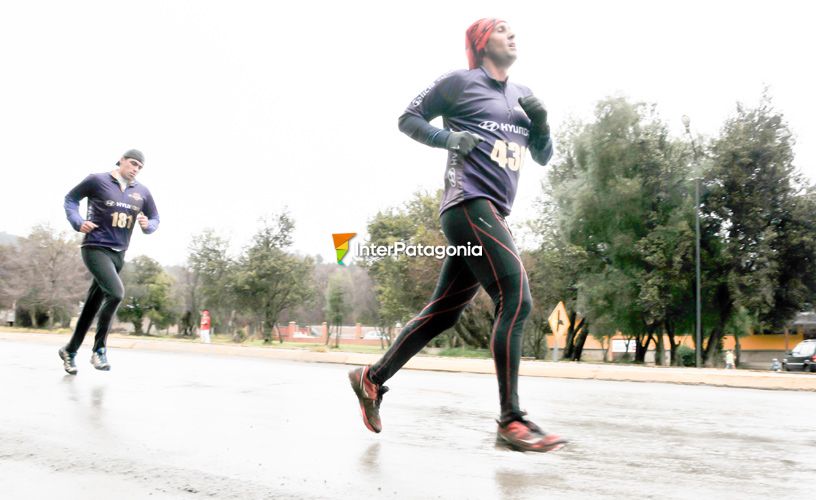 Chapelco's Tetrathlon
Both Argentinian and foreign sports people take part in this demanding trial and are supported by the entire town while immersed in a festive environment.