It is said that men "on foot" are half a gaucho. There is no doubt that "Tero" Bogani with a Capital "G" who invites visitors to ride along mountain paths on horseback.

I have liked horses since I was a child, even though I never had a horse in the city, he confessed as he finished adjusting the harnesses. Tero Bogani has lived in Patagonia since 1989, but he has the aplomb typical of men raised in the countryside.

Along with Adriana, they run Cabalgatas Correntoso, a classic of Villa La Angostura. That afternoon, we were going to visit the Belvedere vantage point and the Inacayal Waterfall, a three-and-a-half-hour ride, ideal for those who are not used to riding.

A family from Buenos Aires and some Chilean tourists also made up the party. Tero selected a horse for each of us and, when we were all ready, we set out.

With a leisurely pace, we took the leafy way leading to the cascade. A connoisseur of his pingos, Tero told us to keep our distance as, even if they are tame horses, they usually get uneasy with one another. The name of my horse was Sombra, and along a shady path away from the bright summer sun, we climbed the winding slope packed with cañas colihues. In this spot, 1,000 m.o.s.l., the understory presents some changes: the canelillo grows like a bush and not like a tree, acompanied by the small mayten, coihues and lengas covered by old man's beard, a lichen that grows on branches and trunks.

The silence lets us listen to the birds singing: the chucao, wrens and rayaditos, as well as the sound the woodpeckers do on the wood. Before we arrived, we stopped and got off the horses to continue on foot.

A few meters ahead, amidst the vegetation, we discovered the Inacayal Waterfall. This fall starts at the Piedritas Creek and shows off a majestic 50-meter fall that goes down a ravine of glacier origin. We had a drink and freshened up a little in the clear fresh water. We went round the watercourse up to a vantage point to behold the sight.

We were feeling like staying, having a chat and listening to the endless murmur of the cascade. After a while, we went back to where the horses were waiting. Our guide controlled the saddles and we resumed the trail towards the Belvedere.

The Sky and the Forests in the Mountain Range

The connection between the waterfall and the mount vantage point was rediscovered by Tero, who resumed this trail after moving about this mountain so many times. We marched quietly along the steep slopes, leaving the lands belonging to the Pascotto family behind and entering the Nahuel Huapi National Park.

Eventually, we got to the summit ridge and stopped to behold the scenery. Paraphrasing don Atahualpa Yupanqui, if there is sky for the good horse, one of them is the mountain range horse. They would pasture as we would admire the view in astonishment: down there, Lake Correntoso with its 27km2, joins the Nahuel Huapi mirror through the river bearing the same name. Tero invites us with a cup of coffee and alfajores to liven up the afternoon. I would have stayed there until sunset, but the main vantage awaited us.

We resumed the ride for a while, as when we began to descend, we had to dismount and lead our horses from the reins. Downhill, Sombra and I did not have any problems.

After a brief tour, we got to Mount Belvedere vantage point. In the distance, in the mountain range outlining the border with Chile, rise Mounts Macal, Dormilón, Tres Hermanas, Pantojo, Rincón, Titlis and Campana. Closer, the Nahuel Huapi spreads out with its seven arms, out of which only three are visible to us: the Machete and the Rincón, privileged for trout fishing, as well as the Última Esperanza.

It was time to go back and we hurried our pace along a thick green trail. We came across hikers and mountian bikers. We continued with our serene gait. When they had a feeling they are getting close to the lair, the horses would respond with a short gallop to say good-bye to us.

The guys like to quote a song by María Bethania which goes I want to have the feeling of the mountain ranges". That is what Tero feels when he rides his horse across the mountain and what he transmitted to us when we shared that afternoon, on horseback. 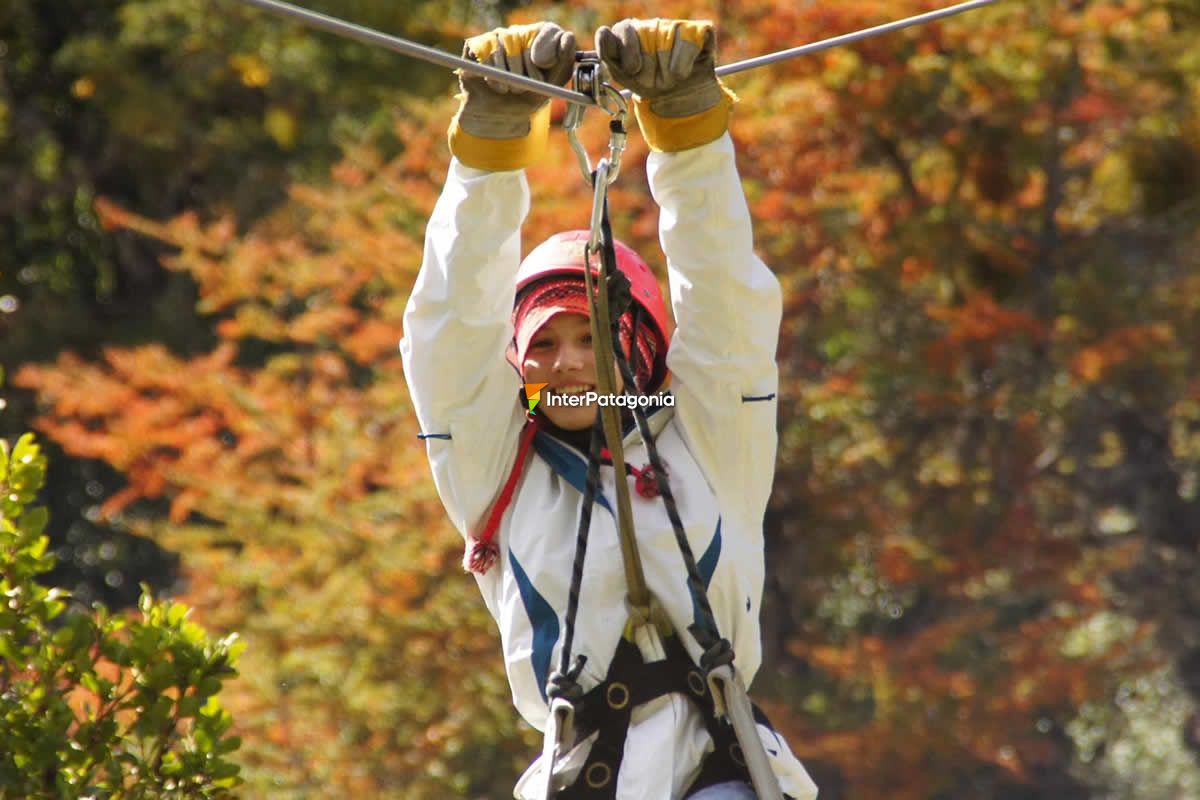