Going from Villa La Angostura to San Martín de los Andes along the Seven-Lake Road means traveling along one of the best roads in the world.

This portion of National Route 40 is known as the Seven-Lake Road. It is a unique circuit that starts at Villa la Angostura and has become famous worldwide due to its matchless scenic beauty, its panoramic viewpoints, its lakes and rivers and countless other attractions that await anyone who feels like discovering them.

The road has been laid out in such a way that lakes follow one another as we travel along this route heading for our destination: neighboring San Martín de los Andes.

Unmistakable Lake Nahuel Huapi is the first one we can observe at Villa La Angostura. As we get away from the city, we get immersed in a scene of woods and trails, perfect to drive for hours.

The next lake that comes into sight is the so-called Correntoso (full of current). It boasts incredible charm as seen from the heights: one of the most iconographic postcards of Villa La Angostura at the point where the lake gives origin to the river bearing the same name, which empties its waters into Lake Nahuel Huapi.

As we drive along, the road leads to a fork where it is possible to continue along the Seven-Lake Road or cross into Chile. This is the detour towards Cardenal Samoré International Pass, which joins this area with Puyehue and the Chilean Panamerican Road at the latitude where the City of Osorno is located.

We continued driving along the Seven-Lake Road and reached Lake Espejo (which stands for Mirror in Spanish) and one of its viewpoints. A couple kilometers ahead, another path lets drivers keep on contemplating its majesty.

Farther ahead, a small but pretty bridge goes over Ruca Malén Creek. A few meters more and a path on the left leads to Lake Espejo Chico (Small Mirror). After two and a half kilometers amid the woods, an ecologic camping ground makes us stop and enjoy this delightful spot.

Lake Escondido (Hidden) is easy to miss. Travelers must be alert for one of the few accesses to this amazing place whose hectares are unfortunately being sold to private hands.
Then come Lakes Falkner and Villarino. These two water bodies are joined by a very short creek. The mount lying on the south margin of Lake Falkner features impressive black rock towers on its summit. It is named Buque (Vessel) and condors nestle on its high peaks. They are easily seen when they fly around its top.

There is a campground on the coast of Lake Falkner, which offers a sandy beach, toilets and showers, fire pits and a convenience store. It is open from November thru April.

Then comes Lake Machónico, whose splendor can only be compared to that of Lake Lacar, the last of the lakes in the circuit. The latter brings travelers to the coquettish mountain village known as San Martín de los Andes.

This is the end of this singular circuit regarded by many as one of the most eye-catching in Argentinian Patagonia. Even after having been completely paved, this road still preserves the same magic it had when travelers moved along by cart or on mule backs.
Read complete Outing... Pablo Etchevers / Eduardo Epifanio 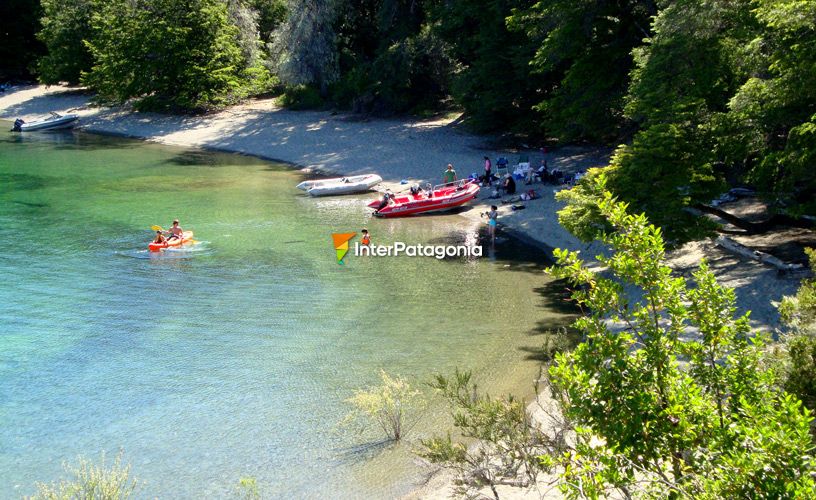