On top of a hill, majestic Hotel Llao Llao may be appreciated from various panoramic points and it is one of the best known postcards of Bariloche.

Whenever we visit Bariloche, we have a picture taken in front of impressive Hotel Llao Llao but so far we had no idea about its interior or history. Now that we were back in the city, we took part in a tourist congress and took a tour around some of its facilities.

With Lakes Nahuel Huapi and Moreno and Mounts López, Capilla and Tronador in the background, there stands the giant, like a city itself. Everything in the venue has been specially taken care of for visitors to feel completely at ease.

Our eyes could not get enough ever since we accessed the hotel through the lobby of the Bustillo Building, where the ceilings are extremely high and the halls are too big to calculate their size. We did not want to miss anything.

The design and decoration place it in a privileged position as a cozy mountain hotel providing the services of a five-star resort where nothing is trusted to chance.

We toured around the main halls. The private areas are only open for hotel guests. In each corner, we admired the materials used, such as cypress and pine wood worked rustically or in planks, an exquisite combination indeed.

We got there just at the time breakfast was served at the Great Llao Llao Hall, also used for events. Very high curtains would cover the large windows; chandeliers with countless light bulbs and the striking ceiling with wooden beams took our breath away.

The convention rooms, the relax and reading rooms, a delicate cuisine and extra activities for the entire family or business group make the hotel tourist offer stand out.

We perceived certain pride as we were told about the history of this ancient hotel in Bariloche. San Carlos de Bariloche reached its zenith while Dr. Ezequiel Bustillo was the head of the administration of National Parks in 1934.

A project carried out in Buenos Aires by architect Alejandro Bustillo to raise the building with stone, logs and Patagonian cypress wood tiles was chosen. The aim was to offer a tourist destination in agreement with the surrounding scenery.

Inaugurated in 1938, a fierce fire burned it down the following year. In spite of the mishap, the entrepreneurs did not give up and rebuilt it within the next year. They preserved the same style, but in this occasion, they chose concrete, masonry and Norman tiles for its roofs.

Unfortunately, between 1980 and 1993 the hotel remained closed and its facilities underwent total abandonment. In 1992, a new group of entrepreneurs resolved to recover it respecting Bustillos original project.

But that was not it. Hotel Llao Llao has been gaining international acknowledgement and enlarging its facilities. We had the chance to visit the new building, namely Moreno Wing, which preserves the essential esthetics of the hotel, the same coziness but larger spaces in the rooms, as well as more modern furniture.

That area comprises four floors, two basements and the vastness of Lake Moreno available for guests. There are no words to describe its outdoor galleries, where large wooden deckchairs invite visitors to take a nap, read a book or just behold the fantastic landscape.

It was impossible to see and remember every area of the hotel resort, where everything is resolved under its roofs. It was extremely pleasant to step on its soft carpeted corridors, breathe its scented atmosphere and feel the warmth of the staff.
Hotel Llao Llao elegance and majesty make the denizens of Bariloche feel proud. Though we were not locals, we shared the same feeling because it is appreciated abroad.
Read complete Outing... Mónica Pons / Eduardo Epifanio 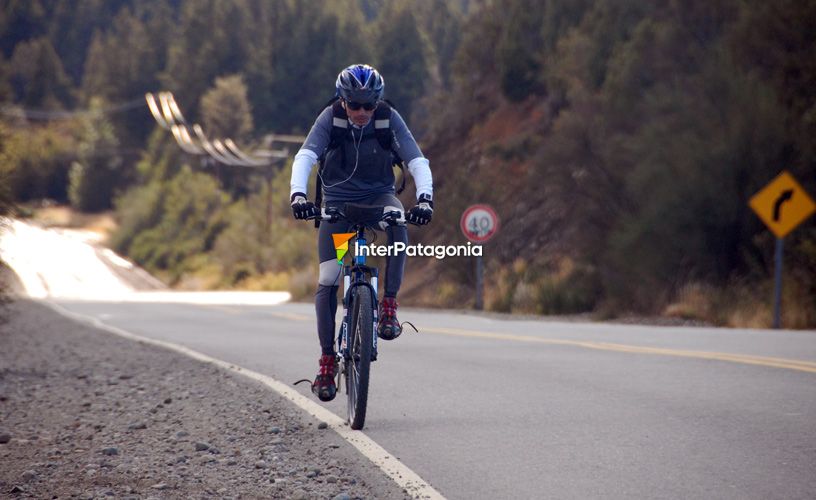 Mountain Bike to Cerro Catedral
San Carlos de Bariloche offers a wide variety of circuits for mountain bike riding. We recommend this intense climb to cerro Catedral along a paved route and then climbing the balcony over lake Gutierrez in the area of Paco Echegaray.