The footbridge area allows visitors to admire the front of the Perito Moreno Glacier and witness the fall of ice blocks from a close distance. At only 30km from the entrance to Los Glaciares National Park.

I was going down the steps in silence, expecting to reach the first viewpoint of the Perito Moreno Glacier, only 85km from the El Calafate town center, inside the Los Glaciares National Park.

We had already bordered the Brazo Rico of Lake Argentino and gone through the forest of lengas, ciruelillos, calafates and larches that ornamented our path, along 30km from the entrance to the protected area to the footbridge sector.

But the front of the Perito Moreno was awaiting us. I knew that the pass between the Canal de los Témpanos and the Brazo Rico was closed. The volume of water of the latter was increasing at a rate of 5cm per day. I was also imagining that, in the event that the natural dam would persist the whole summer, a new break-off might take place, just as the last one in 1984. Every now and then I heard it crack, roar as an incredible living mass.

At the beginning of the footbridge area, the guide had given us a brief explanation and shown us the way. Before reaching the first balcony, we could observe the plate with the statement of World Heritage of Mankind, granted by the UNESCO in 1981; and farther on, two informative stands about glacier processes and the formation of the Perito Moreno in particular.

Every viewpoint offers a new perspective. From the entrance of the footbridge area, we went down 400 meters to the lowest balcony, the closest to the front of the glacier. We were starting to feel tired from the ice hiking, that is why I took the advice from the guide to head always right, down the stairs, in order to have some rest. The intermediate balcony is the best place to appreciate the northern area of the glacier with a good sight of the Canal de los Témpanos and towards the left of this viewpoint is the second balcony, right opposite the glacier.

This glacier never surprised me enough. It is originated, as the other twelve Patagonian glaciers, in the ice field located to the West of the Province of Santa Cruz. Having a 14 thousand square kilometer surface, this huge mass represents the third largest ice mass in the world, after the Antártida and Greenland, and it forms the source basin of Argentina and Chile glaciers.

The ice tongues that go down towards the East enter the province of Santa Cruz through Lake Viedma, in the Northern area of the National Park, where the Fitz Roy and the Torre Mounts are located. The Upsala, the Speghazzini and the Onelli, among other glaciers, go down the Northern arm of Lake Argentino. These formations lie on the rock basement and end in a lake, characteristic that receives the name of calving glaciers.

Even if the largest glaciers in the Park are the Viedma and the Upsala, the Perito Moreno is a large sized glacier located only 200 meters over sea level, which enables to reach its very front easily, not like the other glaciers, which can only be accessed after trekking or sailing for a while.

The Perito Moreno is the only glacier that maintains its balance, that is to say, all the ice mass it receives from its source basin in the winter is gradually lost in its front during the summer.

Almost at hand reach, a strange set of dimensions and perception for the senses. At times, gentle, quiet, freezing both time and the atmosphere. Once in a while, some murmur, a roar growing from the depths and suddenly, the solid 70-meter wall succumbs to pressure; it comes away and falls, collapsing clamorously. And one stays there, leaning on the railing, astonished and breathless, waiting for a new calving instance.

Time passes and I cannot but stare at it, using intuition in order to guess where the next fall would be. It is useless, its grandeur startles and captivates without prediction.

As the locals from El Calafate proudly announce, the Perito Moreno glacier has come to be considered as the eighth wonder in the world.

Recommendations: There are daily transfer vehicle services from El Calafate to the Park. Take many photo films and a small snack in order to make a picnic nearby. 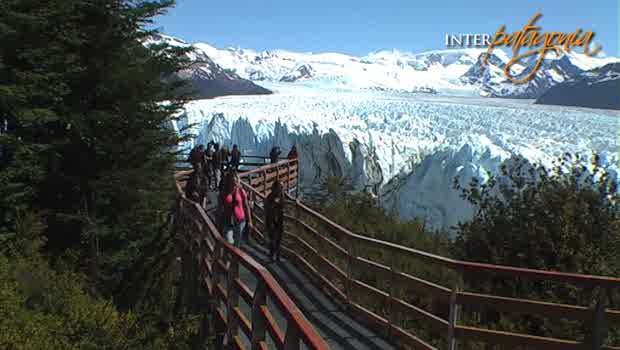