A hiking excursion through a geological and paleontological bed, an incredible natural depression that displays petrified logs and other fossils on the ground. 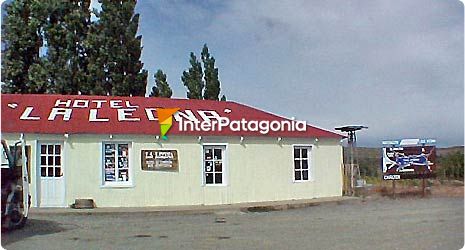 A hiking excursion through a geological and paleontological bed, an incredible natural depression that displays petrified logs and other fossils on the ground.

We set off at 8.30 heading for the La Leona estancia. We left towards the East, along Provincial Route 5, for approximately 33 kilometers and then we went northwards along National Route 40, for 67 more kilometers. As we advanced, we left Lake Argentino, the Santa Cruz River and the beautiful valley of the La Leona River behind, always under the watchful eye of the Andean mountains.
We stopped at the La Leona Hotel, frozen in time, with its memories from 1916, when it used to work as a pub and general grocery in charge of Theodor Baash.

We continued by bordering the southern bank of Lake Viedma till we reached the slope of the Los Hornos mount, approximately ten kilometers inland from the fields of the Santa Teresita estancia.
These lands, which belong to the Vidal family, contain the La Leona petrified trees.
Close to midday, we arrived in the Los Hornos Mount on foot. Unexpectedly, the arid and windy steppe became a surrealistic landscape. The fact is that glaciation processes left singular stamps that cause surprises in the depths of Patagonia.
Out of nowhere, before our very eyes, an enormous natural depression appeared on the land, opening in the very steppe and comprising about 800 hectares. Similar to the lunar geography, the weird appearances of geological formations are the result of the wind and water erosion. Between them, the trees that make part of this significant deposit, together with other fossils, lie entrapped.
As we advanced along narrow paths, we were getting inside a labyrinthine search for petrified logs. 2.jpg" class="image mt-3 mb-3"> Protected by the slopes of the mountain, the weather conditions are extremely dry, which enabled the better conservation of countless pieces on the surface. Some of them have significant magnitude, over one meter diameter.

Millions of years ago, Patagonia was an environment where warm and humid weather reigned, with abundant vegetation, with giant tree forests. At the end of the mid-jurassic period, an intense volcanic activity took place at the same time the Andean mountain range was formed. This buried these forests under a thick layer of ashes. During thousands of years, the mineral components carried out the petrification process, gradually replacing the organic matter which, in spite of everything, kept its external aspect. 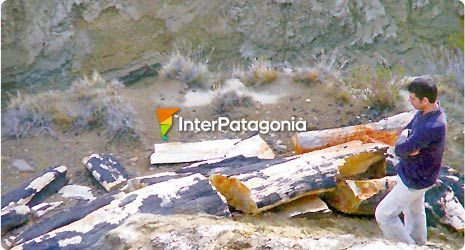 Unlike the petrified forests, these trees in La Leona were dragged both by rivers and glaciers, to the place where they are at present. It is estimated that since the petrification till this day, 150 years have passed.
Once in a while, we found some small isolated logs, but we knew that most of them were in the depths of the ravines. Half way there, we stopped for lunch and some rest. There was nothing around, hardly any plants, except for some scattered thatches and thorny bushes growing around.

After a three-hour walk, we finally got to the bottom of the main ravine where the fossil specimens concentrate. Logs turned into rock, rests of vertebras and bones of apparent prehistoric animals that have not been studied yet, lay all around, motionless for centuries.
When we decided to go back, storm clouds were threatening us from the sky. After passing by La Leona Hotel, we started our way back and arrived in the city of El Calafate in the evening. We had gone along hardly 110 kilometers to discover the remains of prehistoric times level with the ground, long before Patagonia became what we know today.

Level of Difficulty: Medium. The characteristics of the land demand physical fitness.

Timetables: Leaving at 8.30am and returning at 7pm.

How to get here: From the city of El Calafate, take Provincial Route 5 and turn into National Route 40, passing by the spot called La Leona to take an alternative path to the West. Go along 10 km to the slope of Los Hornos Mount.

Indispensable to take hiking shoes, sun protection, sunglasses and hat to protect yourself from the sun, apart from a jacket or anorak. It is also important to carry mineral water provision and an energetic snack for lunch.

Activities and Tours in El Calafate

Hotels and accommodations in El Calafate