Altogether up to the Base of the Fitz Roy

Reaching Laguna de los Tres lets amateur climbers make out Mount Fitz Roy from a close distance. A trek that becomes difficult in the last track but is totally worth the effort. 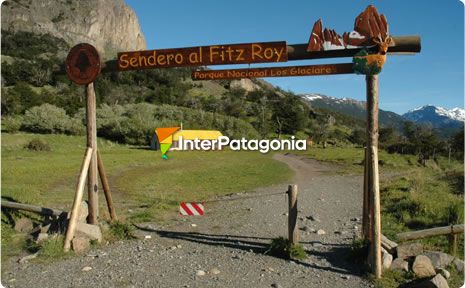 Reaching Laguna de los Tres lets amateur climbers make out Mount Fitz Roy from a close distance. A trek that becomes difficult in the last track but is totally worth the effort.

El Chaltén is one of those places where visitors enjoy themselves just because they are there. We had got everything ready to get to Lake Capri and, if we were alright and felt like going on hiking, we would try to reach the famous Laguna de los Tres. This is an emblematic site and base camp for the expeditions that climb the famous Mount Fitz Roy.

The Fitz Roy is the main summit within a range that has the shape of a croissant opening onto the East. Its main axis runs from North to South. The massif is framed by the Fitz Roy River valley to the South, the Eléctrico River –whose name stands for “electric” in Spanish and responds to the strength of the winds- to the North, two glaciers separated by the Ridge of the Sitting Man to the West, and the North Fitz Roy Glacier that gives origin to the Pollone River to the Northwest, which in turn empties its waters into Lake Eléctrico. 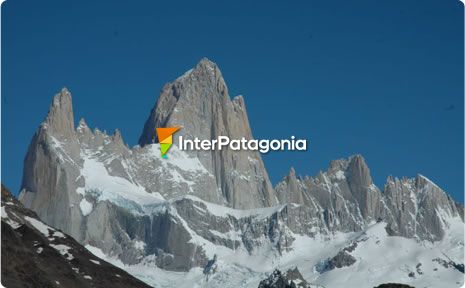 The hiking tour starts at the end of the village, following one of the trails that announces the path to Lake Capri-Mount Fitz Roy. The day we chose to go on this tour could not be better. The sky was uniquely blue, there was no wind and the temperature was amazing. Though we would take the tour on our own, we came across several hikers on the trail, which was very well-marked and it was almost impossible to get lost.

In less than one hour and a half, we had already got to the border of the campsite that announced Lake Capri. We made a stop, took some pictures and after making sure that we were perfectly well, we continued to border the Blanco River towards a magnificent lenga woodland that invited us to stop every now and then to behold everything around us. 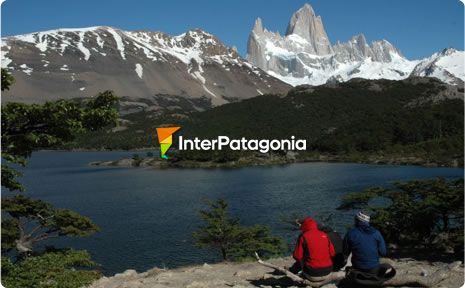 After covering a good stretch, we suddenly spotted the Piedras Blancas Glacier –whose name stands for “white stones” in Spanish. It is a beautiful ice formation held by moraines and resting on the lake bearing the same name. As we left Poincenot base camp and the refreshing lenga woodland behind, the path bordered a dozen ponds that either receive their waters from it or contribute to the delightful waterway.

After covering a significant portion of the harsh solitude of the scene, we were glad to see the wooden bridge over the Blanco River, because we knew that the climbers’ camp was near. From that spot onwards, the difficulty of the last segment was more than evident. 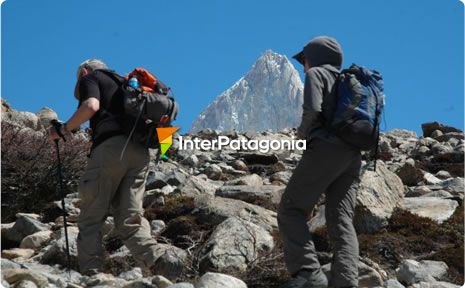 As we arrived at the small wooden shelter, we found other hikers. Some of them had already reached the top of the trail whereas others were waiting for a divine impulse that would prompt them to start the most difficult part of the adventure.

As we were becoming used to the environment, we shared some mate, cereal bars, fruit and cookies with the other mountaineers. The tired and joyful faces of the ones coming down gave us the necessary strength to go in search of the famous turquoise colored lake and the rock wall the rock-climbing world talks so much about: the Fitz Roy.

And so we began to climb up the last part. With incredible tenacity, we went up the steep slope that seemed to have no end. The right technique is to take very short steps and not to stop for a rest, just keep moving. We watched our step very carefully among the loose rocks. Suddenly, we got to our target. We had been looking for it for four hours. 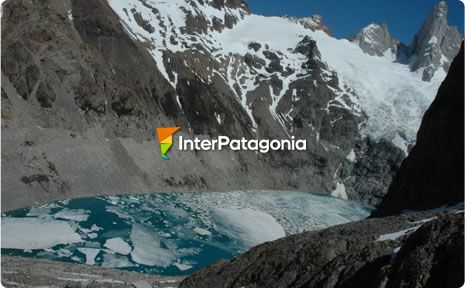 The water body called Laguna de los Tres boasts its lively turquoise hues on the sunny summer days. This time, it was frozen by the Winter temperatures. As indicated by its name, which stands for “Lake of the Three” in Spanish, it is surrounded by three mounts. They are the unmistakable silhouettes of the Fitz Roy, the Poincenot and the Torre.

The celebrations, the enjoyment and the joy of everyone who had hit this Summit was reflected on the photographs, the joyful shouting and even the tears of those who had dreamed about this challenge for years and thought they would never make their dream come true. 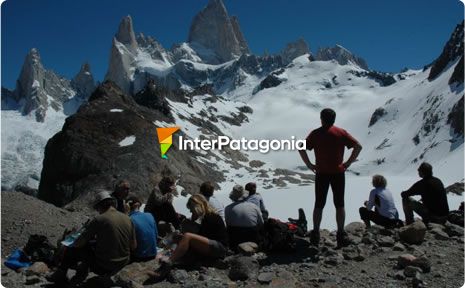 It was with this sensation that we started our way back. The lakes called Mother and Daughter could be seen in the distance. As we continued our way downhill towards El Chaltén, we felt a presence: it was Mounts Fitz Roy (or “Chaltén” for the natives), with a height of 3,405 MSL and the Torre, with 3,128 MSL, two of the most difficult mountains to climb in the whole world.