We went trekking around the Torre Glacier, a demanding tour that implies hiking and ice climbing at the foot of the impressive mount. 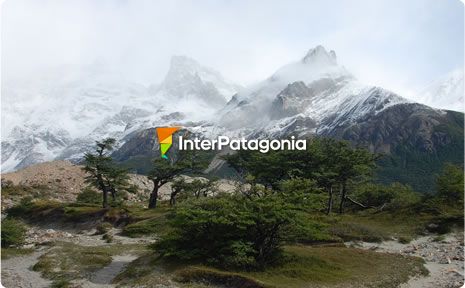 We went trekking around the Torre Glacier, a demanding tour that implies hiking and ice climbing at the foot of the impressive mount.

At around 5 in the morning, the sound of the rain woke us up and we knew that we would not be able to see the incredible Fitz Roy and Torre peaks then. There was a slight possibility that the afternoon would be clear because El Chaltén is like that: unpredictable. It was bearing the possible and remote sunny afternoon in mind that we got ready for our trek to the Torre Glacier. We would join a group of French tourists. We gathered at 6 in the morning at the Casa de Guías office, the starting point. We knew the rain would be our companion for a while.

Vicente, our guide, was showing us the way. We left town crossing the venue occupied by Gendarmería (the Border Guard), where the Torre Lagoon circuit begins. After making a stop at the National Parks signpost where the entire tour was listed, we began to go up the trail.

After going up for a while, we spotted the Fitz Roy River winding between two walls. The thick drizzle prevented us from watching Mount Pliegue del Tumbado and the other peaks. However, the Torre vantage point would give us an interesting panoramic view. Every now and then, the clouds would let some sunbeams through and as we passed by the ñires grove that had caught fire years before, the shining made the twisted reddish logs brighter. In a few seconds, two well-defined rainbows crossed the entire scenery. It was the magical beauty of rainy days. We continued getting deep into the woods until we finally reached D’Agostini campsite, the technical stop to grab a bite and put on our harnesses. At this time, it was quite comforting to have a rest in the shade and get ready. The best part was still to come. 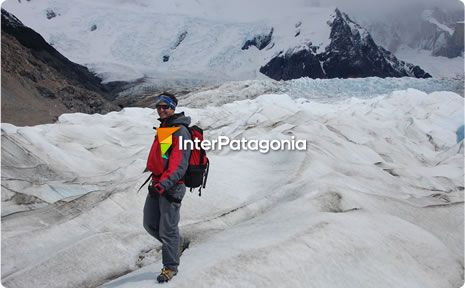 Shortly after leaving the campsite, the steep trail led us to the area of the river where the Tyrolean crossing had been installed. Vicente prepared the ropes and the carabineers to cross and, in no time, we were all on the other side, amazed at the magnificent presence of the Torre Lagoon and Glacier. The wind began to blow more strongly and sleet fell at times. Nevertheless, we kept moving without losing track of the glacier walls. We reached the moraine and put on our crampons as we had lunch sitting at the base of the glacier. It was time to walk on the ice.

Vicente told us how we should use the crampons and gave us all the necessary safety recommendations to avoid any accident on the glacier. With some precaution, practicing our way up and down, we began to tour around this fantastic surface. 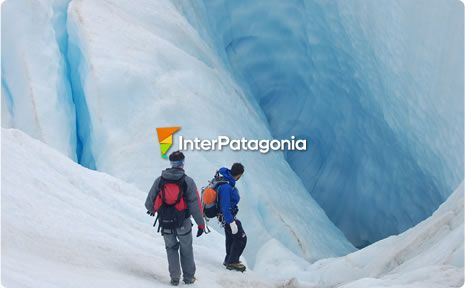 Surrounded by the white and vibrantly turquoise ice, we discovered cracks, deep holes drilled by the water and small caves. Fascinated by the landscape, we stayed there for a while, just beholding the direction towards which the summit rose and longing for the clouds to go away.

Even though we were not lucky enough, we were astonished at our tour around the glacier. Vicente told us it was time to go back so we set out. Back in the campsite, we returned the entire equipment and once we were feeling lighter, we retraced our steps back to town. We were tired but happy to have reached the foot of the Torre. 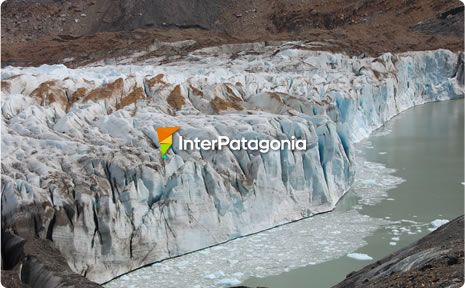 this trekking tour may only be done in the company of mountain guides, who will provide all the necessary equipment, such as crampons and harnesses, for the excursion.