An unusual morning and the desire to ride a horse took me to Mount Fenton. I visited the city winter park and appreciated the endless horizon from the heights. 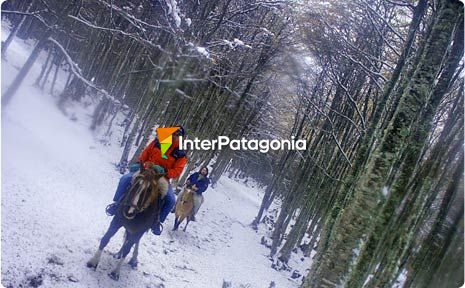 An unusual morning and the desire to ride a horse took me to Mount Fenton. I visited the city winter park and appreciated the endless horizon from the heights.

As an extraordinary feature, the city woke up dressed in white. And I say this because it is quite unusual, though not impossible, for a snowfall of these characteristics to take place at Punta Arenas so early in April. As I drew the heavy maroon velvet drapes, the cold image quickly revealed what was happening outside. I stayed still for a while until I gathered up courage and left the room.


I thought about the possibility of staying inside the hotel, quite warm and without haste, reading a book, chatting with some guest or watching through the steamed-up windows of the hall how the people were coming and going along the opposite sidewalk while a steamy smoke would come out of their mouths.


My own reality indicated that my desire to laze about would have to be postponed, as I had agreed to go on a horseback excursion to Mount Fenton that day and not even the thickest snow would prevent me from riding. 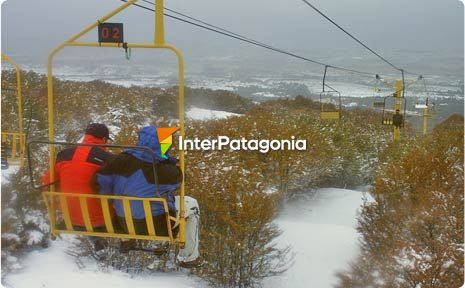 Very punctually, Patrick picked me up on his 4 x 4 vehicle. Wearing warm clothes, a wool cap and gloves, we set out towards the highest point in the city, where the Club Andino works. The place has quite a number of trails and a lift leading to a unique vantage point, from where visitors can catch extraordinary panoramic sights of Punta Arenas, the Strait of Magellan, the Tierra del Fuego Island, a large part of the Brunswick Peninsula, with its geographic features, and the sea with its dark blue color.

We traveled eight kilometers from the center of the city to the base of the small winter park. The Club Andino lands are located in the Magellan Forest Reserve, within an area hanging from the very summit of the mount towards the eastern slopes, ocupying 212 hectares. The scenery, white from every angle, timidly showed some ocher lenga leaves that refused to fall, in spite of the season.


Before the ride began, Patrick and I resolved to take the double chairlift up to the mount top in order to appreciate the view from the highest point. “A tour on the lift will help us warm up and enjoy our horseback ride” - the guide asserted with his particular Chilean accent.


The Club Andino renders various services, such as equipment rental, sleds, ski school and patrols for the safety of the venue. It has a double 1,500-meter-long chairlift and a surface lift. The ski season spreads from June to September, when lovers of winter sports may choose any of the 11 trails to slide down. 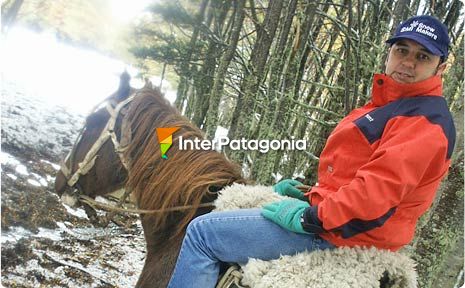 At the top, I confirmed what I had been told about the view. The panoramic sight seemed to join the Pacific Ocean and the sky in only one line. We got off the chairlift to begin our ride. The Chilean horses we were riding had a quiet and self-assured pace. I was riding “Saturno”, a brown horse with a white face whose slow pace let me enjoy a relaxed ride as I watched the attractive natural environment. We bordered the club facility and got deep into a thick forest of new shoots of lengas and ñires. The vegetation in this area is of the High Andean kind, under 10 meters high. In these latitudes, plants compete for light and not so much for the ground humidity. As a result, the trees are thin and have with only at the top. 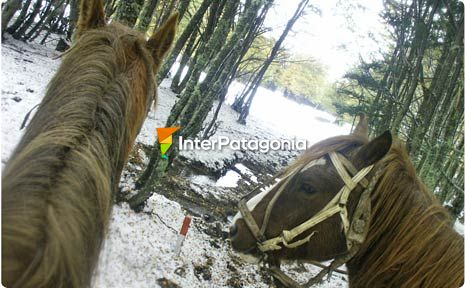 The riding harnesses were not up to much, a saddle and a tight strap seemed to be enough to enjoy the mini-expedition. Patrick, a guide with a capital “G”, took me around the safest spots in the venue. The snow was multiplying, getting deeper and deeper as we went up. Some steps ahead, we crossed a bridge and reached a frozen creek that took hold of the scene and our silence. “The rocks emerging on the surface belong to the Loreto formation and are almost horizontal layers of sediments from the Terciary, about 25,000 years old” - the guide explained, evindencing his geological knowledge.


At that point, we resolved to go back. A slight sleet began to fall while the cold temperature became more intense. We returned following our own tracks, which were being covered slowly. In the last stretch, an invitation to race was a good ending for the ride. I still keep beautiful memories from my visit to Mount Fenton: gorgeous panoramic sights, warm chats about the local flora and fauna and I would dare to say that even a little snow in my pockets... Oh! And the yearn to go back.

Timetables: To be arranged with the tourist agency. In general, horseback excursions leave at 10am, 2pm and 5pm.

How to get here: In order to reach the Punta Arenas Club Andino, travel 8 km from the center of the city towards the West. The road is very well signposted, which enables an easy access to the place.

This is an ideal excursion for beginners. If you like riding, you may ask about other programmes which take 2 and 3 days. In addition to the horseback excursion, we recommend that you go on the snow-shoe hike. And do not hesitate to go up on the chairlift; the panoramic view from the vantage point is quite worth it.