An exact replica of the Nao Victoria recreates the moment in which Magellan set out to conquer the world and found the union of the two seas. A museum commemorates and invites visitors to experience this singular ordeal. 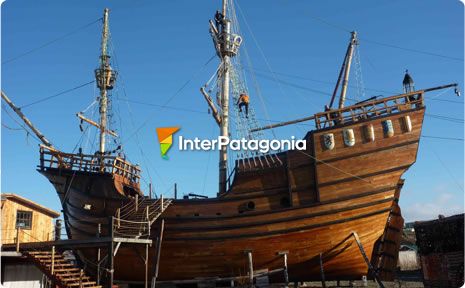 An exact replica of the Nao Victoria recreates the moment in which Magellan set out to conquer the world and found the union of the two seas. A museum commemorates and invites visitors to experience this singular ordeal.

Back in 1480, Ferdinand Magellan was born in the proximity of Oporto, in Portugal. This place had a remarkable influence on his studies of geography and the art of navigation, which would later on lead him to wish to sail and discover the world.

His stubborn idea of exploring the unknown led him to find out that at the end of the new world there was a passage that joined the two oceans, namely: the Pacific and the Atlantic. He knew by word of those who had already seen it, that the sea was a terrible at that site, offering daily storms and endless wind. Therefore, it was the right place to see.


In Search of Unspoiled Land

Thus, on March 22, 1518, Magellan was appointed ' captain general of the fleet and governor of all the lands discovered' through a document signed in Valladolid. The Spanish Crown covered for all the expenses of such an extraordinary expedition.

In August, 1519, the fleet led by Ferdinand Magellan set sail at Sevilla in search of a passage that would join the Atlantic and Pacific Oceans. Two hundred and fifty-six men and five naos (vessels) accompanied him in this ordeal that after a three-year exploration voyage returned to the Spanish port with only 18 men: a small redoubt of heroes who were fortunate to measure the waist of the world, an unthinkable deed for those days of constant discovery and conquest. The Nao Victoria had succeeded in 'going around the world' and telling old Europe what lay on the other side of the endless sea.


A Tribute to Those Days

On the shores of the Strait of Magellan, Route Y-565, and just 7.5 kilometers away from Punta Arenas (area known as Tres Puentes Wetland) there lies Nao Victoria, a life-size replica of the vessel commanded by Ferdinand Magellan built with original plans. 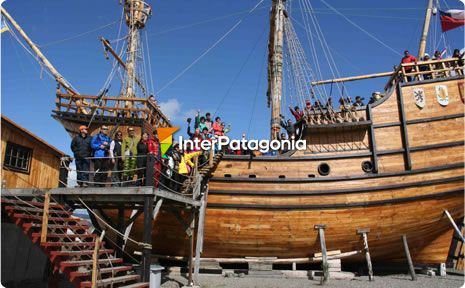 Nao Victoria is an interactive and dynamic museum that rescues the discovery of the Strait of Magellan and enables visitors to enjoy being part of this perfect drill of a sixteenth-century sailing experience.

The ship is equipped with all the maneuver furniture used in those days. Besides the furniture and navigation elements, life-size figures of the various characters may be appreciated doing their daily tasks, wearing the typical costumes and personal items. A sound system enables visitors to 'listen' to the sounds made by the ship while sailing.

This museum is a must visit during any stay at Punta Arenas. The unmistakable figure of the Nao boasts over 25 meters of length, 7 meters of width, 3 decks, 3 masts with 5 sails and almost 28 meters of height. It will certainly catch the eye of any visitor to the city.

A different tourist attraction: a perfect time machine to go back to the past and feel like the member of an expedition during the time when America, and beautiful Patagonia in particular, was still uncharted.

Nao Victoria features three decks, bilge, hold, main deck, front and after castle, poop deck, captain's cabin and living areas, including kitchen, hold, crew area and servants' quarters. It can welcome a maximum of 1,000 visitors per day. A wide range of events, such as shows, cocktails, concerts, professional meetings, exhibitions and the like, may be held on board for 100 guests.