Trevelin’s Regional Museum and its Welsh Past

One of the key buildings in the history of the City of Trevelin shows us the men who founded this District. One of the key buildings in the history of the City of Trevelin shows us the men who founded this District.

It might be hard to imagine the life of the people who left their home country in the late nineteenth and early twentieth century. They abandoned their towns somewhere in Europe to embark upon a voyage with an unknown end. All this was about crossing the world towards a completely mysterious destination where a different language was spoken. They did not know what they would find. And yet, for some of them, that was a better life choice.

Countless stories of this kind forged a country like Argentina, then deserted and soon crowded with people who came along to occupy these territories. This was also the case in one corner of the Province of Chubut, when in the last decades of the nineteenth century, the colonists arrived in the 16 de Octubre Valley. All these accounts, repeated all throughout the country, are always individual stories of the people who arrived in the new world and did their best to build a new home. What is known as Trevelin today, had a very particular feature: the first colonist came together from Wales.

Once in the new lands, these Welsh immigrants preserved their customs and made up a special assembly through which their old home would remain alive. In spite of the subsequent inflows of immigrants of different origins, the town managed to save its identity, the same the first Welsh dwellers bestowed upon it. Today we can watch their effort and lifestyle at Trevelin’s Molino Andes Regional Museum. 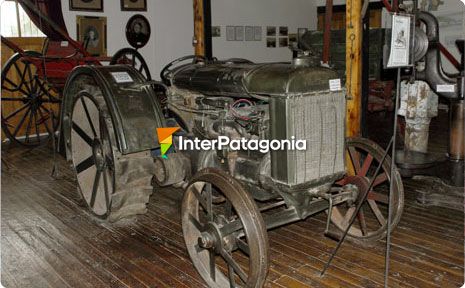 The building housing the Regional Museum was raised as a mill in 1920. The entire local cereal production was processed through that mill. It became so important that the place was named after it. In Welsh, “tre” stands for house or town and “velin” for mill.

Due to various factors, in the mid-twentieth century the mill lost importance until it was finally closed. But in 1971, the descendants of the immigrants resolved to turn this key historical site into a venue that would shelter the testimonies from the past of the village.
At present, its halls protect the relics of a near past, family heritage gathered and organized by the neighbors in order to maintain the memories from the foundation of the town and show those to whomever wished to pay a visit. History and its Evidence

The museum displays elements used in the colonization and the first days of the village. Its halls display a great deal of items used by the immigrants in their daily life back then when the times were hard. Some of these items include: dishes, furniture, medical tools, photographic cameras, musical instruments and several traditional objects typical of the Welsh culture. As well, there is a remarkable collection of outfits and accessories made in Wales, many of them from the nineteenth century.

One of the most fascinating facts in this museum is that visitors need not use their imagination to see the lifestyle of these people: the very objects the colonists used are on display for everyone to figure out what life was like in the days of the conquest.