Ushuaia is the only Argentinian city nestled on the other side of the Andes Mountain Range. This is an invitation to see it through an interesting sightseeing tour on a double-decker bus.

Ushuaia was welcoming us with its usual changeable climate. It was a cloudy and rainy morning. Although the weather usually changes suddenly, it seemed difficult to plan an outing without getting wet. We went out on a tour around the downtown area and, opposite the Tourist Office, we spotted the double decker bus that offers a sightseeing tour through the city. His owner, engineer Luis Votto, was getting ready for the first tour of the day.

As we waited for other tourists to arrive in order to start the ride, we embarked on conversation. Luis told us that his double decker bus is a Routemaster, model 60, brought directly from England and remodeled in Buenos Aires under his design and supervision. Ever since 1999, Luis has been providing this tourist service along with his wife and guide, Mónica.

Stories from the Beginning

All the passengers had already made themselves comfortable on the top deck of the bus. Luis was ready at the Routemaster wheel and we were also on the top deck, willing to enjoy the tour.

No sooner had the bus engine started than la Cumparsita, as well as other well-known tangos that provided the right atmosphere for Mónica´s story, began to sound.

The double decker draws and itinerary around the historical shell and enters the naval shell and the venue of the former airport as a result of an exclusive covenant signed by and between Luis, the Naval base and the museum in order to authorize entrance.

The tour began at Maipú and then we turned into San Martín Street. In former times, this was the only street in Ushuaia and it ran along 14 blocks, from the prison to the cemetery. We passed by the former Government House and Ideal Pub, which dates back from 1951 and whose first cook had worked at the prison. Afterwards, we continued up to the Naval Base, where the prison building is located. It has now been turned into a museum. The works for this significant construction began back in 1901 and were not finished until 1923. We observed the central building, the first electrical engine plant and the workshops of the old jail, as well as a replica of the End-of-the-World Lighthouse.

We set out and went up Yaganes Street and turned into Goberandor Paz Street, which used to represent the northern border of the city until 1960. Some of the first dwellers of the area used to reside on this street, for instance: Spanish José Canga Quiñones, famous carpenter who built many of the ancient houses in Ushuaia.
The migratory inflow set an important growth for the city. In the late 1940s, over 1,000 Italian immigrants arrived in these desolate confines along with their families in order to work in the local infrastructure and they stayed. They gave shape to the neighborhood presently dwelled by the families of the Naval Base.

Lastly, in the 1960s, a third stage of population was marked by the policies used to foster the industry. This measurement attracted countless companies and, therefore, a large amount of workers who settled down new neighborhoods.

We turned into Deloqui Street towards Paseo del Centenario (Centennial Promenade). The bad weather did not let us appreciate this panoramic vantage point featuring the mountain range that surrounds the city and the islands on the other side of the Beagle Channel. We went down Sarmiento Street towards Bahía Encerrada (Enclosed Bay).


Around the First Neighborhoods

As we advanced towards the area of the old airport, Mónica told us the history of the natives from these latitudes: the yaganes or yámanas. It was not until 1860 that the first white man settled down in Tierra del Fuego, namely, Anglican Thomas Bridges, who had come in an evangelizing mission. She was telling us about this when we passed by the monolith settled on the spot where the first house on the island used to stand. It is now under Chilean sovereignty, as they moved it to Navarino Island in order to restore it and turn it into a museum.

We stopped for 10 minutes so as to take some photographs of the city from the high lands of the old airport and then we bordered the naval neighborhood, where the so-called low mission used to lie. We returned following Malvinas Argentinas Street. To the right, we spotted Beban House, a magnificent building raised by a Croatian merchant. Today it houses the Ushuaia Cultural Center. The former cemetery lies right across the street and farther ahead, there is a Monument to the Malvinas, the first Salesian Catholic church and the remains of Saint Christopher vessel right opposite. This boat was coming in search of the vestiges of the Monte Cervantes. We also saw the first Government house and then we headed for the End-of-the-World Museum, where some of the passengers got off right in time to start the guided tour. The rest of them, who were going to visit the Sea Museum and the Prison, also arrived right in time for their tour. Both options are essential when it comes to getting deep into the history of the origins of the city. No wonder that the city tour ends at these emblematic spots. 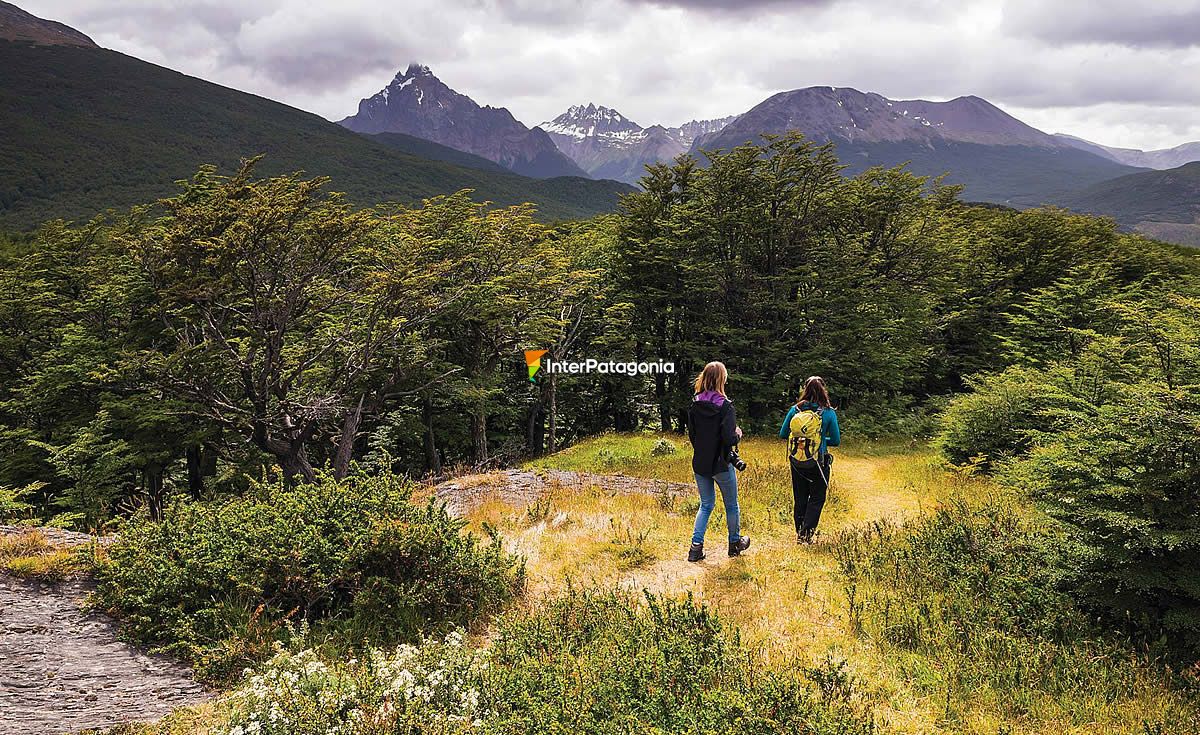 Cerro Alarkén Nature Reserve
In a well-cared and protected setting, a program of activities invites you to enjoy the Ushuaia nature reserve, with a panoramic view of the southernmost capital.