As a way to show the valuable techniques learned by experts, several local craftsmen opened their workshops for us to cover in depth both traditional and new techniques. 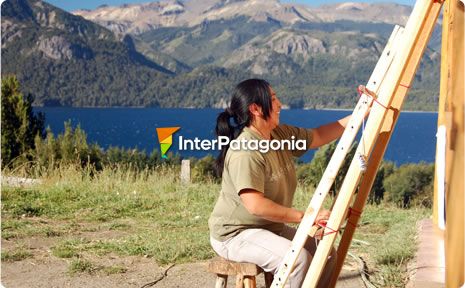 Wood, paint, antler, handspun yarn are some of the materials handled by experts resulting in high quality craftsmanship.

As we were arriving at Villa Traful, we talked about the project called “Craftmen’s Route” launched by a group of students of the senior year of high school. The purpose was to promote crafts of the region. Therefore, this tour includes a visit to workshops to get in touch with craftsmen and their creations.

We arrived at Erica Painepe’s house, who welcomed us without neglecting her small kids. Of Mapuche origin, her surname means “blue sky volcano”.

With simplicity and proud of her own venture, she told us that she had improved her drawing and painting by attending local workshops. She works with hard wood as radal and cypress and creates pretty useful tools for daily life with jig saws, woodworking chisels and paints.

She sells dishes, boxes and spoons. Erica has gone on with her family traditions and works on Mapuche looms. Her mother and aunts taught her the technique when she was a child and she offers her woven articles along with the wooden objects for sale. In this way, she managed to have a job while keeping a family and a home. 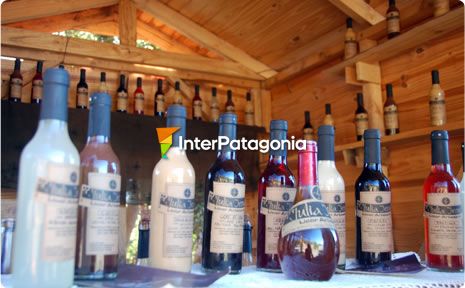 When we visited Julia Irene and Victor Lopez on their stall where they sell liqueurs, we were very interested in knowing about their life project. She is a singer and has a degree in music from a school in the City of La Plata and this art accompanied her at the time they decided to settle down in Patagonia.

Julia Irene works as a music teacher in local schools and has participated in festivals and peñas all throughout the Province of Neuquén.

This couple started to make their first and unique rose hip liqueur. Later on, while both of them continued with their respective jobs, they went deeper into the creation of new flavors.

Tests of alcohol content and additional cooking lessons led this couple to improve themselves and produce liqueurs of higher quality. Victor is the most devoted to this special art and his home is the place for his creations.

In summer, it is time to get berries, soak them and sell the products manufactured the previous year. In winter, they produce the usual liqueurs and create new flavors which are stored for their fermentation.

Prior tasting is the key to success. Regardless of this extra activity, they go on with their usual work of making music using voice, guitar and other instruments.

Jorge Virasoro is another craftsman living in this area and we visited his house-workshop. 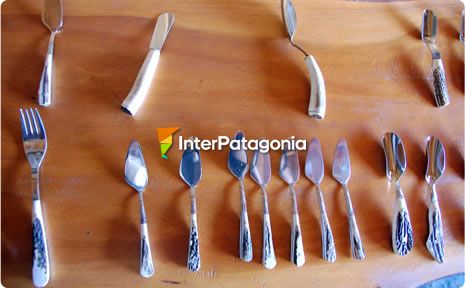 During our tour, we visited Cuyin Manzano, where we gazed in awe the great rock formations of the landscape. There, several families make their living by raising animals and other rural tasks on the coast of the river that meanders through the spread houses.


It was easy to find Dagoberto Riquelme. He works with deer antlers and we could see his art displayed in his house.

Dagoberto was born here and, as a child, he learned how to carve and the art of knives hafting from the grown-ups of his family with the material found in the countryside.

Little by little, he added metal and wood to his work and he started to manufacture spoons, knives, door handles and other useful tools for daily life. He is also a blacksmith of his own crafts and sometimes he uses the anvil to manufacture part of his usual works of art.

When we visited his workshop, we could see a few machines that help him create his products. After talking for a while, he told us more details about his experience as a craftsman.

Sophistication, delicacy and an excellent carving technique are the essence of this craftsmanship. Patience and time are the combination for this fine product. 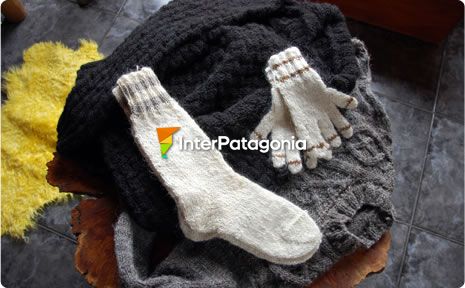 Woven items, liqueurs and jams made by hardworking hands

During this tour we also met Teresa Chamorro. Born there, she is very active and has taught weaving on the Mapuche loom as a complement of her farm activities. She has an old chest from where she pulled several woolen coats and sweaters of handspun sheep wool yarn, a technique learned when she was a child.

Some clothes were woven with natural grey or beige wool and finished with antler buttons. Some others showed yarns dyed with extracts of plants. She made a nice comment: “the Mapuches use red hues to catch good luck and energy”.

Her mother taught her the art of handspun yarns and loom weaving like a game. As a grown-up, she took advantage of this spontaneous learning process. We could see cushions, sashes and blankets made on the loom, a current fashionable technique.

Teresa took part in the Sweater Festival in Bariloche and the Market of Production and Crafts in Neuquén and was granted several awards for her woven items.

But Teresa’s life is not just weaving. In summer, she devotes her time to collecting berries (cherry, redcurrant, sarsaparilla) and starts the process of fermentation of liqueurs and storage of jams in the old traditional countryside manner by using whatever nature can offer.

All these people love what they do in places they have chosen to live.Contacts: