Puerto Montt is a city with a charm of its own. Visitors may walk along its waterfront or admire its streets, mounts, churches and museums. However, they will always end up at aromatic Angelmó.

When walking along the waterfront, visitors come across piers, the Yatch Club, the local harbor, fabulous cruise liners, the Angelmó harbor and its handicrafts market and, in front, Tenglo Island, famous for its vantage point and its curanto.

The seafood and fish market is located on the Angelmó harbor. Cholgas, scallops, machas, locos and picororos, as well as the famous pink salmon, can be found there.

This is one of the most popular and characteristic markets in Chile. One just needs to smell its aromas and cross its gates and various stall tenders, mostly women, start to shout out the dish of the day as they invite visitors to sit down inside the small stands. It is possible to watch the fishermen returning with the fish of the day and even watch the daily market tasks as they eat.

It is also possible to get on board some launch, schooners and sailing-boats moored there in order to visit the islands in the Reloncaví Inlet and the Chiloé Archipelago. Towards the West, the Chinquihue sector is reached, where the palafitos (constructions built on stilts to avoid flooding) challenge the tides from the heights and, along with the colorful houses, give the site a very special look.

On the other side of the waterfront lies Punta Pelluco. This is the main bathing resort at Puerto Montt. It is located inside a hotel and gastronomy area where the specialties are salmon and curanto -a typical regional food consisting of various ingredients cooked inside a hole in the ground filled with hot rocks and separated by large leaves of a typical plant.


Farther ahead, stands the fossil forest of Punta Pelluco, where there are 31,800-year-old fossil birches that may be observed in the low tide.

In the surroundings, three monuments referring to local history may be observed. One of them has been dedicated to the German colonists who arrived in the mid XIXth century. On the other hand, the first locomotive, dating from 1906, an da kind of watercraft which is no longer built, called lanchón chilote and used in the area for decades, are displayed.

The Juan Pablo II Municipal Museum houses a varied collection of items related to the natural, archeological and anthropological history of the region, as well as weapons, navigation objects, religious icons and local mythological beings. Likewise, it is possible to find a real treasure in the venue: ancient photographs of the city and a collection of objects and testimonies from the German colonization.

The Jesuit church is another tourist attraction at the City of Puerto Montt. The Jesuits arrived in 1859 and the church dates from 1872. Behind it, on a hill, stands the Jesuits belltower, built in 1894.

The Diego Rivera art room lodges the artistic and cultural manifestations of the region. Its construction was set forth by a ChileanMexican agreement of fraternal cooperation (1960-1963). Located at the present Plaza de Armas, it houses a brass sculpture representing a family of German colonists and commemorating 125 years of German colonization in the entire region of Lake Llanquihue and its surroundings, including Puerto Montt.
Read complete Outing... Pablo Etchevers / Eduardo Epifanio

Recommendations: At night, the city becomes quite dangerous. Therefore, it is advisable to tour it in groups, take a taxi or rent a car. Also, be careful not to leave any belongings on the vehicles and do not go around the harbor area alone and in the dark. 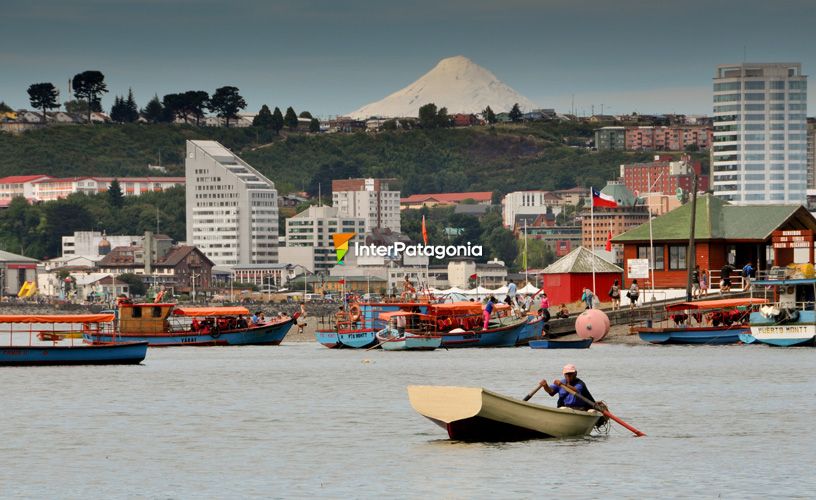 In the City Outskirts
The alternatives for tours in the city outskirts are plentiful and quite varied. Those leaving from Angelmó and the ones touring the Southern Road stand out.