What the River Hides

An expedition that connects us with the depths of Valdivia. We sailed the seven rivers of this place, seeing the flora, the fauna and its enigmatic history. 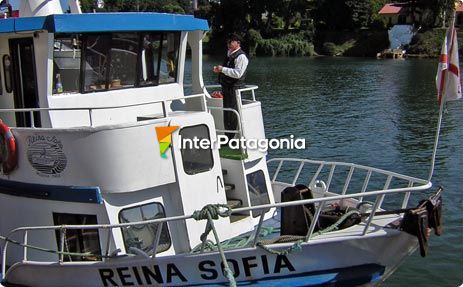 An expedition that connects us with the depths of Valdivia. We sailed the seven rivers of this place, seeing the flora, the fauna and its enigmatic history.

It was in the early morning. The intense mist of the shores of Valdivia started to rise and, with it, a new adventure appeared before us in our visit to the city of rivers.
After visiting the Fluvial Market, where we let ourselves be invaded by the busy fishing environment, we continued our way along the waterfront. Our aim was to get on board a catamaran and discover the charms of Valdivia from another perspective: from the water.
Thus we met Walter Edison Urquejo, who approached us to offer a tour that would take all day on board a craft along the seven historical rivers of Valdivia.
Almost without hesitating, we accepted the invitation. The appointment was at the Schuster pier at one o’clock in the afternoon. As we had some time to spare, we resolved to have a snack in one of the restaurants located in front of the harbor. A delicious fresh jaiba dish delighted our palates. We accompanied this snack with a cold glass of white wine and newly home-baked bread. Satisfaction guaranteed.

At the time arranged, we were waiting for permission from the captain of the Reina Sofía –such was the name of the catamaran– to get on board. With great expectations and asking for surprise, we got on the craft. 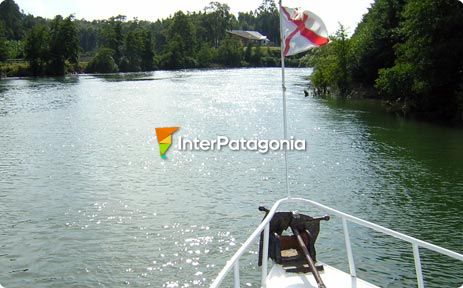 After the authorization to set sail was given by the Chilean prefecture, we started to navigate the largest fluvial net in the trans-Andean country. It was beautiful to watch the reflection of the sun beams dazzling on the water. They seemed to welcome us to a day plenty of light and calmness.
As we passed by the Fluvial Market, we could see the sea lions that settled down in the area years ago. These animals are carnivorous and generally feed on wastes of fish thrown at them by the people at the market. The adult male may weigh from 200 to 300 kilos and consumes an average of fifteen kilos of fish daily.

Sergio Ñanco Retamal –guide of the expedition– was in charge of telling us about the various aspects of the landscape we were going through. This nice character, a Mapuche descendant, made it clear that he is in love with his job, his land and his people. He has a special contact with the river witness of his birth: the Calle Calle.

Towards the Valdivian Forest

We passed under the Pedro de Valdivia Bridge and then we could watch the Collico vessel, anchored by the pier. This legendary and symbolic craft was built in Dresden –Germany– in 1907. It was brought from Europe in three parts, and then it was assembled and used to tug the falucho cargo boats along the Valdivia River. When we paid attention to detail, we noticed the riveting technique used in vessel construction in the early XX century. “Collico –the guide explained– means ‘reddish water’ in the mapudungun tongue”. 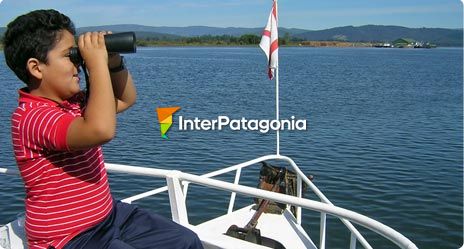 As we sailed on, we got into a template evergreen rainforest, known as the Valdivian rainforest. This is the area of Chile where the rainforest becomes most exuberant.
Little by little, we said our good-byes to the city. After the Calle Calle River shipyard, came the Universidad Austral de Chile and the botanic garden –with its more than ten thousand vegetable species. We then started to cross the Cruces River, in the area of the Sanctuary of Nature.
Declared in 1991, this sanctuary was formed after an earthquake and sea earthquake that hit this area of South America, in May, 1960. The land sank and flooded farming areas on the banks of the Cruces and Chorocamayo Rivers. At that moment, a leafy aquatic flora emerged –known as wetland– where countless local and aquatic birds make their nests, among which the black-necked swan outstands. In the distance, we could see a pretty couple of these plumaged specimens, dipping their necks in search for some little fish for lunch.

These swans take advantage of the availability of the abundant reed –real floating cushions– to make their nests. It is common to see the offspring get on the backs of their parents, whether to rest or to get away from danger, thus offering a beautiful show.
The depth of the river we were crossing ranged between seven and ten meters, which permits the navigation of large draught crafts. It is precisely to port and to starboard that we came across countless fishing boats, tourism catamarans, motorboats, sailing-boats, yachts and cargos transporting wood chips from the processing plant located at Guacamayo, on the bank of the river.

We left towards the Corral harbor and the Mancera Island. We left the Teja Island behind and crossed the Cruces Bridge. This outstanding engineering work is the only overland route that connects Valdivia with the coast areas of Niebla, Los Molinos and Curiñanco. Its pyramidal shape enables large crafts to go along the river without any inconveniences.
At full speed, the Reina Sofía started to navigate the Valdivia River, leaving the Cutipay River mouth behind. As we advanced and continued enjoying the landscape presented before us, we saw one of the most vivid memories of that oceanic fault in 1960.

The sea earthquakes of those days generated, among other things, a strong tsunami –bay wave– which hit the Corral harbor, tugging the El Canelo boat, from the Haverbeck & Skalweit Shipowner, which was loaded with centals of flour from the Valdivian mills, ready to set sail.
The tsunami literally raised the heavy craft and dragged it for more than ten kilometers upstream, reaching the front part of the Estancilla River mouth, by the Sofía small island. Today it is possible to see part of this colossal craft grounded in the middle of the Valdivia River, where part of its bow and masts may be seen.

A Harbor with History

Once we reached the Corral harbor, the moment of landing arrived. Sergio took us to see the San Sebastián de la Cruz Fort, one of the seventeen Spanish fortresses built in the area as from the XVII century. Then, we would go to the Mancera Island to see the San Pedro de Alcántara Fort.
San Sebastián de la Cruz was raised in 1645 according to the plans plotted by the Royal Navy Head Engineer Don Constantino Vasconcelos, who chose a strategic location for the fort to defend the backwater of the harbor, as it was one of the most important points in the bay.
When going inside, you will appreciate the sentry box, the pillory area, the original cannons and people dressed as Spanish soldiers, who for a few Chilean Pesos would agree to be taken photographs beside tourists.
Beholding the endless horizon spreading along the Pacific Ocean from its walls is an experience as cozy as it is relaxing.
We rapidly returned to the Reina Sofía, but this time only to sail a few meters to the Mancera Island, where the San Pedro de Alcántara Fort is located.
As we entered, we verified that its characteristics were quite different from those of the Corral Fort.

From the strategic point of view, it has one of the best locations, as it is nestled on the only island located in the middle of the bay.
When going around it, we can see some remains from its main castle, the castellan’s house, the guard body, the entrance watchtower, the gun-powder store and the San Antonio church, built in 1748.
“This temple used to have a high choir, a sacristy, vaulted niches and a pulpit. The Jesuits sculpted the front of the façade with a baroque-guaraní architectural style” Sergio explained, showing that he had deep knowledge of the subject.
The cultural influence of the Spanish conquerors on the locals of these latitudes was embodied on its walls.
We finally returned to the craft. Our final destination: the city of Valdivia. As we tasted a hot cup of tea with a piece of German cake, we were on our way back to civilization. In the background, we were listening to a son by Luis Aguirre Pintos, called El camino de la luna (the path of the moon), which poetically describes our voyage during that day. Charming indeed.
“And the moon bathes in the water …”, the song went. 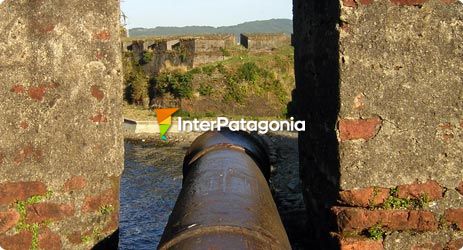 Timetables: Embarkation on the catamaran starts at 1pm at the Schuster pier.

How to get here: from the center of the city –main square– walk along two blocks towards the river, till you get to the waterfront.

take sun protection and warm clothes to be worn after sunset, as the temperature drops considerably. It is an excursion for the entire family, without age limits.