In our pass by the “city of rivers”, we took a mandatory break in order to taste the taditional Kunstmann beer and learn about its brewing process and history. 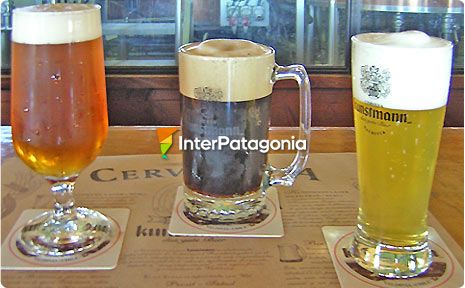 In our pass by the “city of rivers”, we took a mandatory break in order to taste the taditional Kunstmann beer and learn about its brewing process and history.

Before leaving Valdivia, we took a “mandatory” break at the traditional Kunstmann Brewery. In this warm, pleasant and informal restaurant, in addition to sharing nice moments with friends, you can taste the most diverse kinds of hand-crafted beer, which have made Valdivia popular as a synonym for good beer.
To reach this place, we went along the coast route that joins the city of Valdivia with Niebla. After crossing the Teja Island, we drove on for five minutes till we got to our destination.
When we entered the large hall, our attention was caught by its delicate decoration. German architecture and orangish colors. It was full of beer barrels, beer taps, and snifter glasses. We were welcomed by the local guide, who explained to us that we were entering a museum and dining-hall, where we would discover more than 100 years of local history. Furthermore, we would have the chance to taste four kinds of beer that are brewed there.
Thus, we passed onto the brewery, where we were taught the brewing process.

“Our Kunstmann beer is brewed according to the purity edict, passed in Reinheitsgebot in 1516, which sustains that true beer must be brewed naturally, with first-quality ingredients: barley, malt, ferment, hop, and the most important thing, fresh crystal-clear water from Valdivia” –explained the host.In the museum, we could appreciate ancient machines used in the brewing process, and we saw some old labels and bottles.
History goes that, in the mid XIX century, most beer consummed in Chile was imported. There were only two breweries in the country: the Irishman Andrés Blest's, and the Argentinian Vicente Moreno's. Within this context, in 1851, the German immigrant Karl Anwandter created in Valdivia the brewing company he baptised with his name.
During the 1870's, the production of the Anwandter brewery was close to one and a half million per year. Some years later, in 1894, it reached twelve million liters per year. Sixty percent of this production was commercialized in the domestic market and the rest was exported.
When the First World War started, in 1914, twenty-five million liters per year were springing out of its pools.
Finally, the brewery founded by Karl Anwandter operated until 1960, when the famous earthquake tore it down.
Under Anwandter's brewing concepts, the Kunstmann beer started to be brewed, and today, it is internationally well-known for its taste, body and color. 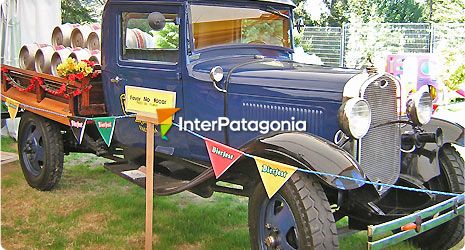 After the explanation that carried us along the history of the place, we passed onto the beer garden, where an exquisite German banquet that would accompany the beer tasting was awaiting.
First, we tried the dark or bock beer. It has an intense dark color, with a stressed flavor of toasted malt and a light sweetness, the result of low fermentation. It has the highest alcoholic level, product of the harmony between a high concentration of the initial wort and a long low temperature rest.
Afterwards, we felt the delicious sensation of tasting the Torobayo Ale. This is a high fermentation beer, with a pleasant and characteristic smell of hop. It presents a pale ambar color, given by blond malt and caramel. The origin of this beer is particularly British. It was quite fashionable in Victorian times, especially all through Europe and India. 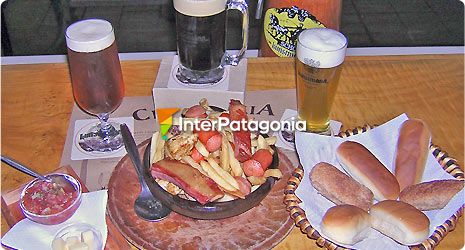 We then experimented the taste of the unfiltered Blonde Kustmann Lager. This is the traditional beer of the brewery, obtained before the filtering step, which gives it unique very special characteristics, such as the addition of vitamins and proteins to the body, having a rawer beer taste, directly from maturation to the glass.
Finally, we tasted the Blonde Kunstmann beer, which is the low fermentation beer, brewed at temperatures as low as 10ºC, and using only blonde malt, hop, water and yeast.

This beer rests for at least one month at low temperatures, when a secondary fermentation takes place, which gives it maturity features.
Once the tasting finished, and after we had learnt everything concerning beer and shared a pleasant lunch with friends, we left the store. As it was a great day, with a clean blue sky and full of sunshine, we resolved to spend the last minutes on the Niebla waterfront, totally satisfied to have complied with the Valdivian beer tradition.

How to get here: From the city of Valdivia, you must cross the Pedro de Valdivia bridge towards the Teja Island. Then, take the coast route leading to Niebla; after a five minutes' drive, you will make out a sign indicating access to the Kunstmann Brewery.

At the moment of tasting, we recommend that you drink moderately an in the order suggested by the tour. In this way, you will appreciate the taste of each beer more accurately.