This is one of the historical sites in the district. Lodging, a stop on the way, a general store and tons of history meet here just across one door.

The sign on the road announces that we are standing before a historical site: La Leona Rest Area and Countryside Hotel, Historical and Cultural Heritage in the Province of Santa Cruz.

La Leona Rest Area and Countryside Hotel lies 110 kilometers away from El Calafate, on National Route 40, on the shores of La Leona River and meters away from Lake Viedma, right halfway between El Calafate and El Chaltén. For over 110 years, it has been a witness to and the protagonist of the legendary history of Patagonia.

The site was declared historical and cultural heritage in the Province of Santa Cruz and it has been refurbished in the last few years in order to meet the demands of the great number of tourists that visit the venue everyday.

Nevertheless, and as a result of the accurate vision of its owners and the people in charge, the feeling and the spirit that have made this place worldwide known remain intact from every point of view.

Today, this site is ideal to have lunch, dinner, a cup of coffee and a piece of cake, go for a short walk, fish or just have a rest and enjoy the scenery.

Built in 1894 by a family of Danish immigrants the Jensens-, it was precisely at this very spot where Francisco P. Moreno (expert Moreno, consecrated Argentinian scientist and explorer) had been attacked and badly wounded by a female cougar (referred to as a lioness by the Patagonian jargon) 17 years before. After this incident, the river that runs through this area was named after this animal, as la leona stands for the lioness in Spanish.

In 1905, three foreigners stayed there for almost one month and then continued their way towards the Chilean border. Later on, a police committee showed Mr. Jensen some photographs portraying the faces of the individuals he recognized as his distinguished guests.

They were no other than Butch Cassidy and the Sundance Kid, accompanied by the wife of the latter: Ethel Place. After robbing the Bank of London and Tarapacá in Río Gallegos, they made a technical stop during their flight towards Chile.

The Petersens, along with Alfred Brodersen, from Germany, acquired the venue in 1910. They added two rooms to the already existing pair at the hotel, all of them built with adobe bricks, and they raised a pulpería (gauchos bar) and a general store, which today function as the pub and the coffee house at La Leona. Years later, Jul and Feliza Christensen became the owners of this site and in turn they sold it to the Saldia-Westerlund family.

As it was the only recreation area for the local rural workers, the excess of alcohol would give way to a great number of fights that used to be solved through criollo duels. These would generally end up with the death of one or more opponents.

In 1922, in the middle of a strike organized by the workers of the Patagonian estancias, La Leona rest area could not remain aside from these events. Used as a detention camp, a great number of strikers, mostly European and Chilean, were executed without a previous trail on the river bank.

Father Alberto María D´Agostini was another famous character that frequently visited La Leona rest area. Born in Italy, this Salesian priest combined his call with his passion for mountaineering and adventure. Amidst mass, weddings, baptisms and missionary work, he would find the time to go on epic ascents and expeditions to the most inaccessible areas in the southern mountain range.

The most famous and formidable climbers in the world used La Leona rest area as first base to gather their gear before setting out towards their intrepid and sometimes fatal ascents to Mounts Torre, Fitz Roy and Saint-Exupery, as well as to the continental ice fields.

Among them, the famous French-Argentinian expedition made up by Lionel Terrey, Guido Magnone, Lieutenant Francisco Ibáñez, Louis Depasse and Jacques Poincenot (the latter of whom passed away during the expedition), were the first ones to hit the summit of Mount Fitz Roy on February 2, 1952.

After reaching the top of several of the most dangerous mountains in the area, it was Casimiro Ferrari, Italian by birth and Patagonian by adoption, a real climbing hero, the first man to conquer Mount Torre, on January 13, 1974. In love with the magnificent scenery, he settled down a few kilometers away from La Leona rest area, at estancia Punta del Lago.

The strategic location of the rest area, on the way from El Calafate to El Chaltén or vice versa, makes it possible for visitors to make a stop and enjoy some of the benefits it offers at first sight.

Recommendations: La Leona rest area and countryside hotel has an inn that provides lodging for tourists and a camping site area.The inn has four bedrooms (one double, one triple and two four-bed rooms), all of them with heating and private bathroom. 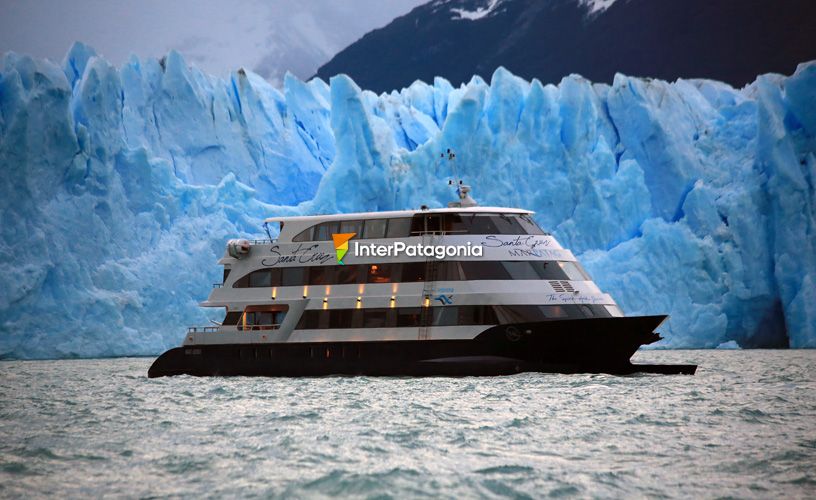 The Spirit of the Glaciers
Deep, pure blue and turquoise glaciers are a breathtaking view in sunlight or twilight during sunrise and sunset.