Identifying dinosaur tracks oneself is an adventure second to none. Villa El Chocón offers that possibility in the twinkling of an eye.

Some footbridges settled around the tracks left by the dinosaurs on their daily journeys are the starting point of a curious tour on the shores of Lake Ezequiel Ramos Mexía.

Should we hear there is a chance to see a dinosaur track, we would believe it was some kind of joke, mistake or something completely outrageous. Millions of years stand between us and these beings and, in the meantime, the Earth changed its shape and soil over and over.

The Neuquén basin (Villa El Chocón in particular) has become a deposit of dinosaur specimens and valuable pieces have been rescued. We could observe many of them at the Ernesto Bachmann Museum.

At that venue, photographs of several very well-preserved impressions left on the rock by various types of saurians are on display. They led us to the neighborhood known as Llequén and, more precisely, to the lakeshore.

Among reddish rock, on layers with typical steppe vegetation, there are two track preservation areas. Some high iron footbridges let visitors spot the zone at once. We chose the most visible ones.

For the time being, and due to the invasion of the artificial lake on the continent, the tracks were partly covered with mud and we could only see some of them. Knowing that they were authentic footprints of those huge beasts seemed almost unreal. Our brain refused to comprehend how a dinosaur footprint left 100 million years ago could have resisted the passing of time. But there they were.
Studies carried out by scholars have led to an understanding of the events: the dinosaurs would have walked on soft ground. Their heavy weight and the later fossilization of the soil calcined by the sun would have contributed to this phenomenon.

When the mud got dry, it became resistant to erosion. Other sediments would have been deposited on those tracks, thus managing a natural mould. They have been found fossilized both in positive and negative relief.
The scientists studied the tracks and were able to establish more precisely whether those beings walked on two or four legs, whether they ran or jumped, whether they had a slow or agile gait.

Their existence shows the way to the possibility of finding more in the future, as long as the wind and water erosion continue to weather the present rock formations.
As far as we know, they have not enough protection. The footbridges should be better designed in order to prevent visitors from deteriorating such valuable material. 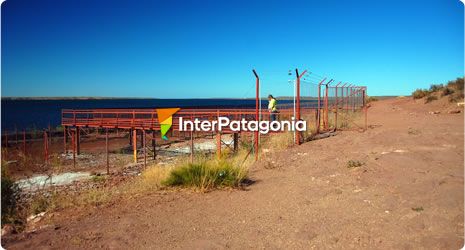 As we left, we felt a special respect for this place. Spreading the news, but at the same time preserving this venue, would be our argument so that many people can see it with their own eyes just like we did.

How to get here: To reach Llequén neighborhood, visitors must leave the village following National Route 237 and travel 3 kilometers towards Bariloche. The urban settlement is accessed through 9 de Enero Avenue, which leads straight to the lakeshore and the tracks.

It is advisable to visit the Bachmann Museum before seeing the fossils in order to understand and watch the tracks with further accuracy.