A Village Overlooking the Lake

A young town on a soil that gives evidence of an ancient past invited us to stroll about its quiet streets and to get to know its daily lifestyle. 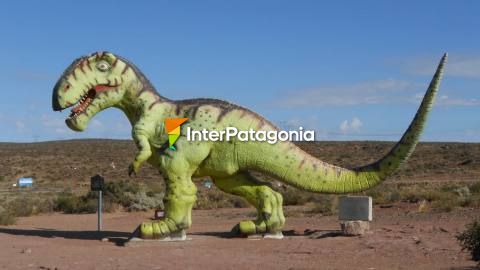 The village is a large wild balcony; the winds and the vastness of Lake Ramos Mexía are part of the local lifestyle.

As we traveled along Route 237 from Neuquén to Confluencia, we spotted the access to Villa El Chocón as a result of the life-size dinosaur replica standing on top of a cliff. We traveled 3 kilometers from the access until we saw the first houses. Located on an elevation of reddish clayey rock, they looked scattered here and there. In front, an artificial lake occupied the space formerly crossed by the Limay River, now broader due to the dam.

Quite small, its neighborhoods all feature similar designs and structures. They were built at the time the hydro-electrical power station works started. They are known as Barrios I, II y III.

The Heart of Town

Surrounded by sparse vegetation and strong wind, we got deep into the streets of town up to the very heart of the village: its commercial center. Showing a unified building style, its institutional and commercial life is concentrated at this spot. It contains a school, the Ernesto Bachmann Museum, the Town Hall and several stores. A set of large staircases provides a very pleasant architectural style 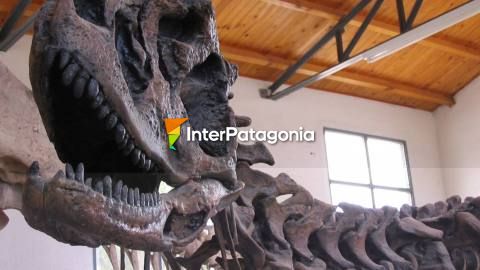 The architectural line of Our Lady of Chocón Church, Patron Saint of dams, caught our eye. Very sober and modern, it features the shape of Noah’s Ark. Inside, we watched its luminosity and lack of ornamentation. That myth, God’s judgment during the Deluge and the salvation of the righteous, is part of the teachings imparted at the church.

For years, the village was associated to the finding of various dinosaurs that dwelled in this valley in the distant past. We considered it important to go on a guided tour around the Ernesto Bachmann Museum, which helped us grasp the magnitude of the findings carried out in the area. Most signposts in the stores, cabins and streets in the village would refer to these huge beings from the past.

In the new part of town, on the high shore, a great deal of youths was riding their bikes among splendid weekend villas. This was proof of the tranquility of the village and its denizens. 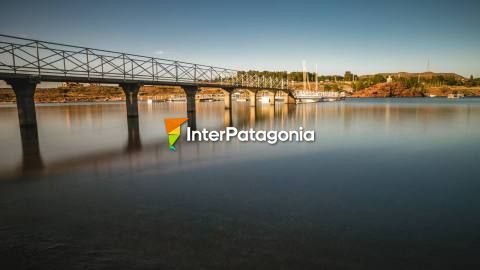 We continued our tour towards the coastline, where there are plenty of cabins for rent, inns and other accommodation venues overlooking the lake. The summer is the high season.

We came across a eucalyptus forest, the only one in the area containing various species. The rest of the vegetation is made up mainly by shrubs adapted to the dry environment with the presence of clay.

As it was a very nice day, the hustle and bustle on the coast and the camping site was intense, especially in the area known as Bahía Boca del Sapo (the Toad’s Bay), where the sandy beach let us sunbathe for a while as we observed the kayaks, boats and motorboats coming and going all around.

Quietness, very little noise and fresh air were at our disposal to enjoy a distant horizon in front of us. We dove in the transparent clean temperate waters of the lake. At around noon, the blazing heat forced us to search for some shade at some quinchos in the surroundings. 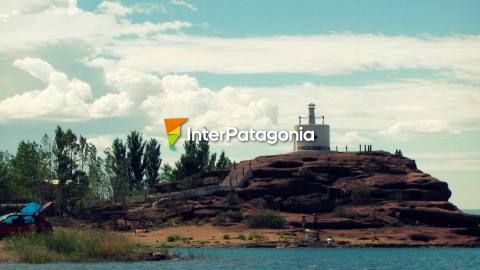 A very neat football field, the old abandoned lighthouse and a small landing strip were the attractions in our hiking tour. Everywhere from the historical houses in the area known as “the H” up to the tourist development we observed in Villa El Chocón, we noticed the intention of its inhabitants to show off their sights.

Far Away, So Close

Llequén is another neighborhood. Its main appeal is the possibility of watching the dinosaur tracks found years ago.

Once again on Route 237, the deep blue hue of the Ezequiel Ramos Mexía reservoir escorted us for 60 kilometers as we left town towards Picún Leufú. We felt that Villa El Chocón was a village facing its main treasures: the water, the dinosaurs and clean energy.