The Giants in El Chocón by motorboat

We unveiled the secret of a huge clay massif called Los Gigantes (“The Giants”) after crossing the lake by motorboat. There we found out the power of the wind and the effect of the erosion has created for thousands of years. 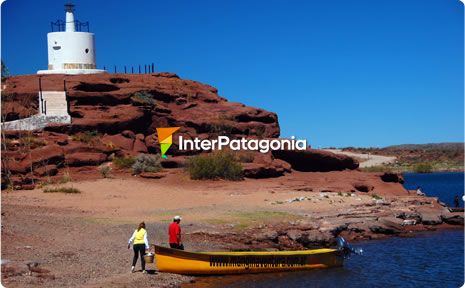 We were welcomed by a huge desert land, home to only hundreds of migratory birds, and we visited onlyjust a few of the places found in this area.

Comfortable clothes, a jacket -just in case-, all the stuff for some good mates and our expectations were loaded in our backpack to start our motor boating tour. Once we finished the conversation with our guide Sergio Mangin, we headed off to visit the vastness of the Lake Ezequiel Ramos Mexía.

Once we met at the agreed time onat the dock on Del Sapo Bay, one by one we got on board the motor boat that can accommodate up to 10 passengers. At the beginning with everyone in theirfirst, once on our seats and with lifewearing our jackets on, we could hear only a few comments; however, as the time went by, the chit-chat among passengers broke the silence.

On the water and far from the coast, the town seemed to appear higher and the red-hued rock formations showed the trace of wind erosion for thousands of years. A narrow beach could be seen out of bay.

The coast became smaller and smaller until we left behind the lighthouse, the waterfront houses and the hustle and bustle of the life guards.swimmers. Like a postcard, the hills behind the town displayed the layers of clay in a wide variety of red hues crossed by white and yellow bands. 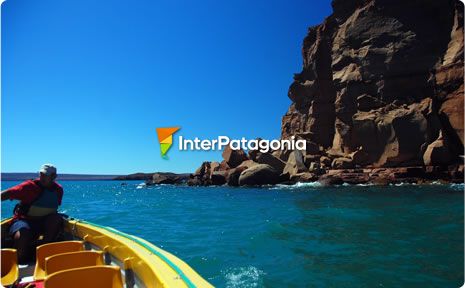 The cliffs are high rock walls in dark brown carved by continual erosion. Above, an undulating desert land packed with prickly plants and typical desert vegetation sheltered the Valley of Dinosaurs and a petrified forest of 100 million of years old. Far away, the crest of the dam enabled us to imagine millions of liters of water flowing into the Limay riverbed after generating electricity generation.

Then, we headed off to The Giants and we heard the gruff sound of the engine as the motor boat picked up speed. Ramos Mexía seemed to be endless, as if there was not any shore. Some of the passengers asked to stop the engine for a while to quietly gaze at the immensity of the desert. It was a real spiritual experience, which everyone enjoyed almost speechlessly.

We headed forward just 9 out of 24 kilometers of the lake width. We could feel the wind blowing against us drawing thousands of swirls on our faces and hair.

“This clay plateaus opposite in front of us were originally part of the massif situated on the coast from where we set off. A break occurring millions of years ago formed this wide valley, which was afterwardsthen flooded by the dam construction”, Sergio told us.
Upon our arrival at The Giants, we noticed that it was formed by a huge wall and several small rockrocky islands. We could see the din ofThey were hit by the waves against the rocks as the foam splashed all over the place. As we watched the patterns and hollows in rock formations, we could imagine some mythological characters. 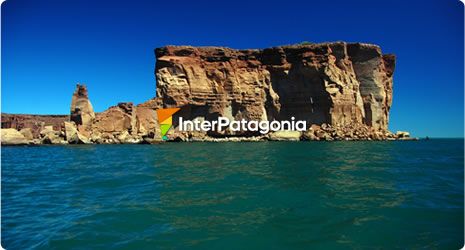 On We landed on a hidden beach, we got off the motorboat and immediately we stopped to feelfeeling the continual rolling.rocking. We placed our bags on the sand, and sandwiches and soft drinks started to come out of them. Picnicappear. The picnic was ready. We noticed that although there were no trees, we were protected by the shady walls. “What an astounding place you chose, Sergio!”, someone said.

During our chat, we asked about the way of life in this area. The locals measure winds by just looking at the horizon. Clear sky indicates that there will not be wind and a grey sky indicatesmeans that the wind will raiseis raising dust and itswhose density, reveals the speed of the wind. Another infallible method is the flight of Black Vulturesblack vultures, which glide along with the air currents. The Limay riverbed is a transient home to migratory birds. 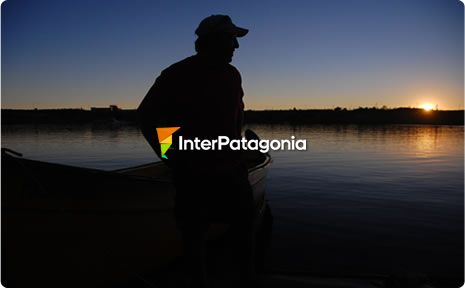 On our way back and from the distance, the huge walls showed their edges, patterns, hollows and balconies once again. We went past next to itthem and itstheir immensity made us feel very small indeed. At full speed, we stared at the changes of color in the water and all around.


With a Calm Soul

Again, we could see the red-colored clay walls and, in this case, the entrance to the Hidden Cañadón, whichRavine, whose hollows and juts of the walls were highlighted in a particular way by the sunset light. Our guide openly showed the passion for nautical activities as a result of his Olympic past and his respect for the environment.

The low flight of a Neotropic Cormorantneotropic cormorant was the end of our motor boating tour as we discovered the edge of the Boca de Sapo Bay from where we had departed.

The motorboat has proper safety equipment.
As weather conditions are usually unsteady in Patagonia, tourists are advised to further consult local weather forecast to wear about the proper clothing for the outing.
Outings are available all year round, except for unfavorable weather.