From the Sea to the Mountains

The incredible scenario of Cochamó gets deep into the mountain range. We rode along its paths: the same paths used by jesuits and colonists to cross the Andes.

The incredible natural scenario of the Cochamó valley gets deep into the mountain range. We rode along its paths: those used by jesuits and colonists to cross the Andes.

With the sea breeze, we got to the Campo Aventura lodge, located only four kilometers to the South of the Cochamó village, in the homonymous river valley. After going through a little myrtle tree forest, Cristiane was waiting to welcome us. The riverside lodge is in keeping with the natural beauty of the environment. Rustic and warm, no detail is missing in the decoration and good service, which offers from baby-sitters to sauna. After making ourselves comfortable and having a cup of tea with grape pie, we strolled along the quiet beach of the Cochamó River, close to the camping area, in the company of our hostess. This water course, next to the Petrohué and to the Puelo River, is a good preserver of its ichthyocolla richness, from which salmon and trout outstand. We felt like diving, but it was almost seven in the afternoon, time for dinner, and in the dining-room, the table was laid. The vegetarian cuisine at the lodge, in the hand of chef Paulina, deserves a separate section. That night, she offered us a light starter of vegetable pie with fresh avocados. Then, an exquisite peas cream soup, and as main course, sea bass with croquettes and peppers tossed in oil. For dessert, a soft cherry mousse. Everything is healthy and home-made with organical products from the area, which combine subtle vegetable flavors with excellent fish dishes. The after-dinner chat with the Danish girls and other Swiss tourists was long and amusing, and the starry night was inviting us to stay up. But as the following day we would go on a horseback excursion, I resolved to go to bed early.


An Ancient path in the Andes

As soon as the day broke, Stefanie, our guide for the horseback excursion was already getting everything ready for the ride. We were only waiting for Gabriel, one of the Campo

Aventura cowboys, born in Cochamó and in charge of the horses. We met Stefanie at the dining-room to have breakfast and talk about her stay in Chile. Just like her mate Andrea, they come from Germany and she was hired through the Internet to escort visitors in the different horseback rides. As almost all of us were experienced in these arts, the class given by Stefanie was short and simple. Besides, the noble horses were really tame, suitable for horseriding beginners.

We were all eager to go through the Valdivian forest. So, we went up the Cochamó River to get immersed in the valley.

In the past, the natives did not settle in this area as they considered it unsafe because of the closeness of the volcanos. The whole natural environment was kept almost untouchable, till the mid XVIII century, when the jesuits preaching in Chiloé, decided to explore the valley in search for a path and to spread their missions in the area of the Nahuel Huapi. Going through this path, they used to avoid the route crossing the Cayutué lagoon and the Lake de Todos Los Santos, which had turned extremely risky as from the indigenous rebellion in the year 1600. This pass, to the South of the Tronador volcano, allowed communication between Chiloé and the Northern cities. 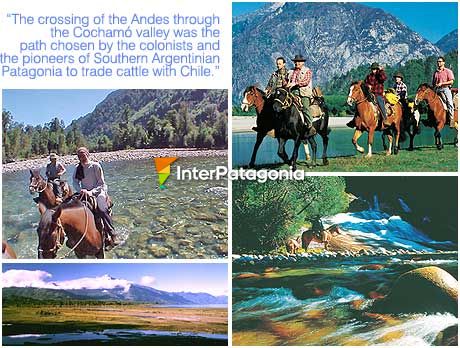 The crossing of the Andes through the Cochamó valley was the path chosen by the colonists and the pioneers of Southern Argentinian Patagonia to trade cattle with Chile. The story goes that the famous bandits Butch Cassidy and Sundance Kid used to take this pass to enter Chile while settled in a field in the Argentinian town of Cholila.

As we were advancing among the thick forests and watching their pristine nature, the quiet riding of my horse was transporting me to the days of the pioneers or the cowboys that took the same route with their cattle.

It was a very sunny day so we were very happy when we approached the ford that would help us cross the crystal-clear waters of the Cochamó River. We continued our march and after crossing some cattle gates, we resumed the rubble road to go back to the thick forest paths.

We stopped by the Piedra River to enjoy some delicious vegetable pies and some fruit Paulina had prepared for us to have lunch. Once our energy was recovered, we continued walking up to the Junta. Compared with the Yosemite because of its natural environment, the native forest, surrounded by mountains and waterfalls, gives lodge to tree and wild animal species emblematic of the Andean area, such as cougars and condors. 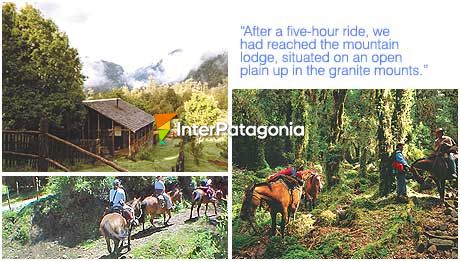 After a five-hour ride, we had reached the mountain lodge, situated on an open plain up in the granite mounts. Yarlé and Héctor, our hosts from the mountain shelter, were waiting for us with a snack on the deck in the open air, where we sat to behold the view. The landscape is impressive in its beauty. I remembered Lex’s words again: “Time is not important here,” and I tried to explore the multiple expressions of this wild and untouchable nature with my eyes. The afternoon was falling down.

After a comfortable hot shower, we gathered by the fire, as Héctor prepared everything for the barbecue. Among chats and stories, the night was sliding as we had dinner in candlelight. Outside, the darkness of the valley hardly allowed us to see the contour of the mountains. 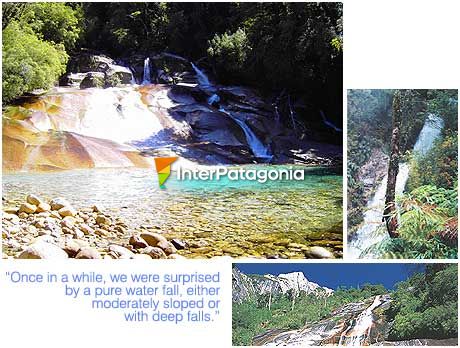 The sun rose early, with a soft breeze that promised another fine day. Once we had had breakfast, we were ready for the hiking excursion along the De la Junta Valley. As we were advancing along the well-defined path, we discovered some of the already identified fifty different species of plants and trees of the Andean forest. Once in a while, we were surprised by a pure water fall, either moderately sloped or with deep falls. Eventually, we arrived in the lagoon, bordered by ancient trees, more than one thousand years old. However, the most long-lived species spreads above the area of El Arco, so-called because of a spectacular arch of natural stone that crosses a small cascade, on which top stands a stunning larch. These specimens, which date from more than three thousand years of age, grow from a light two-milimiters-and-a-half seed and reach almost eighty meters of height and four meters of diameter in their logs when they reach maturity.

We returned late to the shelter. Before dusk, Yarlé had got dinner ready. He had prepared it on a firewood stove. Another placid day was falling on the mountain. The following morning, we would retrace our steps to the riverside lodge. In this way, and through the exhuberant nature of the Cochamó valley, our horseback riding excursion came to an end. 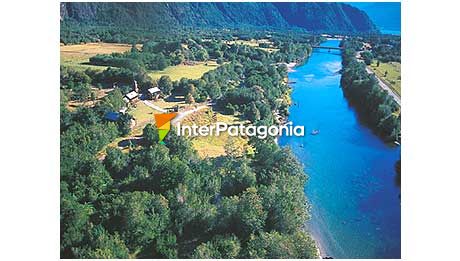 Level of Difficulty: None. This tract is suitable for people over 10 years old, whether they can or cannot ride.

Duration: There are different options. Generally, a night is spent at the riverside lodge and the following morning, the horseback excursion is made to the mountain shelter. Tourists stay for two nights and return on the fourth day.

How to get here: The excursion starts in the afternoon at Puerto Varas and, after an hour and a half, you get to the Campo Aventura riverside lodge.

There are multiple horseriding proposals. Contact us and make arrangements with the agency according to your schedule. You can start with a kayak excursion from Ralún to Cochamó. Whichever option you choose, stay at least for three days.