The Tierra del Fuego National Park protects the natural environments discovered by Magallanes, when he spotted the island and its bonfires from a distance.

The end-of-the-world train left us in the core of the Tierra del Fuego National park, where Javier, from the Tourist Office, was expecting me to be my guide around this natural reserve.

The park was created in 1960 and its 63,000 hectares protect the southernmost portion of Subantarctic forests. Its main protected area is Lake Fagnano, which empties into the Pacific Ocean.

Unlike other Andean Patagonian parks, the forests contained in this reserve lie close to the sea coast. The mountain ranges, parallel to one another, cross the park in a Northwest-Southwest direction and divide it into valleys which are quite hard to access.

We headed towards the South, opposite Mounts Cóndor and Guanaco, where Lake Roca empties into the short and turbulent Lapataia River, which ends into the sea through the bay bearing the same name.

Lapataia, which in the yámana tongue means woody bay, is a beautiful 6-kilometer-long bend where the sea gets into the land on the Beagle Channel.

The forests provide a unique environment: the peat bogs are formed by a thick mattress of moss and vegetable matter. Trees such as ñires, lengas and guindos or coihues magallánicos grow next to the peat bogs.

The tree branches get covered with lichen which hang in the shape of a beard and moss with an attractive reddish shade. The variety of flowers, such as the notro and the yellow violets, may be appreciated all year round.
This leafy vegetation is the habitat of the woodpecker and the austral parakeet, and the black browed albatross, the kelp goose and the steamerduck make their nests on its shores. The red and gray foxes, guanacos and the marine otter, an endangered species, are other dwellers of the park.

Marine invertebrates are plentiful amid the rocks of the Beagle Channel, namely, the cholgas, the mussels, the limpets, the shells and crustaceans such as the prized spider crab. Local fish include the puyén, the peladilla and the sea bass.

This park treasures rich testimonies from the first human groups which dwelled the Island of Tierra del Fuego: the selk´nam or onas, the haush or manek´enk, the alakaluf and the yámanas or yahganes.

Close to the shore, the yámanas left countless traces of their settlements. This Indian people lived on the sea and numerous shelly deposits formed by piles of mollusc shells and remains of sea animals that made up their diet, in addition to tools for everyday use, may be appreciated at present.

After crossing the Lapataia River, the Ovando River and the Cormoranes Archipelago, we reached the interpretation center and a yámana shelly deposit, with an incredible vision of the bay, ideal to watch the several birds.

There are two self-guided interpretative trails in the area: the Negra Lagoon trail, which goes round the peat moss, and the Los Castores trail, towards which we were heading in order to see the dams built by the beavers and the environmental impact caused by this introduced species.

We did not have enough time to reach the XXIV milestone, which marks the Chilean border, or Pampa Alta, where a beautiful sight of the Beagle Channel, the Chilean Yendegaia Bay, the Redonda Island and the Ushuaia and Ensenada Bays may be enjoyed.
Read complete Outing... Karina Jozami / Karina Jozami

How to get here: Leaving from the City of Ushuaia, take National Route 3 towards the South and travel only 12km to enter the park. 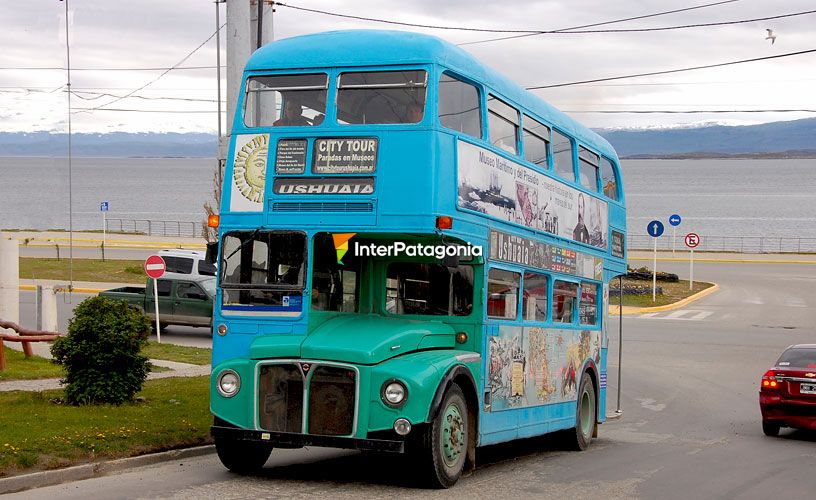 The Only One Behind the Andes
Ushuaia is the only Argentinian city nestled on the other side of the Andes Mountain Range. This is an invitation to see it through an interesting sightseeing tour on a double-decker bus.