The marine fauna is presented in its greatest splendor in a wild and placid landscape at the same time. A boat trip to explore the islands that appear in the Beagle Channel.

From the Eduardo Brisighelli dock in Ushuaia depart several excursions to navigate the Beagle Channel and its numerous archipelagos. Precisely, from the modern boats you can enjoy all the extraordinary landscape.

A tour between islets of rich fauna
Sailing through the islands of the Birds, the Wolves and the Les Éclaireurs Lighthouse is the most frequent route that can be done throughout the year. The first two islands are part of the Bridges archipelago, characterized by a fauna rich in birds and marine mammals. On the island of the Birds, you can see steam ducks, southern seagulls, common skúas, imperial and black-necked cormorants, sea cakes.

On the island of Los Lobos, sea lions with one and two hairs usually feed on their seaweed beds. Both species enjoy the waves and rocky headlands, even the second climbs agilely to the top of the cliffs to rest. They live in colonies.

The lighthouse, sometimes misnamed the Lighthouse of the End of the World, is located on the whole of the Les Éclaireurs islets. This iconic 11 m high tower was set up in 1920 and today it works automatically, remotely controlled.

If weather conditions permit, hikers can disembark on Mary Ann Island, the third largest island in the Bridges archipelago, and do a small trekking.

In spring and summer, the routes can be extended a little longer and reach the penguin colonies on Martillo Island. In addition to seabirds and colonies of sea lions, Hammer Island has a large penguin, where the dominant species is the Magellanic penguin or also called the Patagonian penguin. These species nest on the islets of Tierra del Fuego, where the muddy and soft earth, with high values ​​of organic matter, allows them to build optimal caves such as nests, to then migrate northward in winter. Another species that adopts Martillo Island as a breeding colony is the Papua penguin. Each year this colony grows a little more.

The walks that reach the penguin can be extended a little and thus know the Estancia Harberton and its history linked to the first white settlers. Its founder was Thomas Bridges, an Anglican missionary who arrived in Tierra del Fuego in 1863, after spending some years in the Falkland Islands. His work extended not only to native peoples but also to the care of orphaned children. Thomas Bridges received a donation of land from the National Congress and there he founded his stay in 1886. The name comes from the hometown of his wife Mary Ann Varder, in Devon, England. Today the main objective of the stay is tourism. Receive visits from October to March. 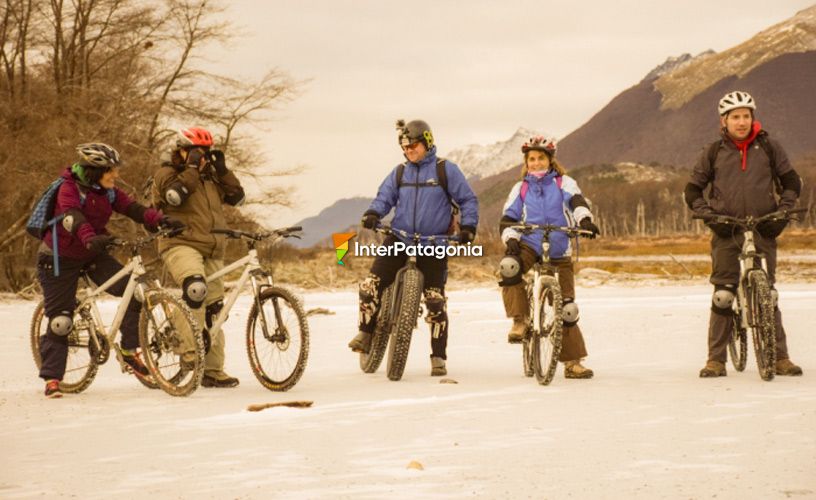 A Bicycle through The Winter
There is nothing better than a bicycle for travelers to see the worlds end in the winter. Though days are shorter, this is a fascinating experience.