We sailed up to Gable Island, a part of legendary estancia Harberton, which treasures an impressive landscape as well as the vestiges of its first dwellers.

The idea of touring around mythical estancia Harberton in an adventurous voyage in order to explore some of the most concealed nooks lying close to Ushuaia turned out to be too interesting a proposal.

The people from Canal Fun picked us up very early in the morning. We set out along National Route 3 and 40 kilometers ahead, we left the pavement in order to take the detour into Complementary Route J, which leads to Harberton. After traveling 45 kilometers along this gravel road, the estancia venue is entered. It is located on a windy peninsula famous for its windswept trees.

These singular lengas, cherry trees and ñires shaped by the strong gusts grow near the shore and stand out in every postcard of Isla Grande.


We stopped on the banks of the Larsiparsahk River, the place chosen to start paddling. The guides quickly got the rafts ready and distributed the boots and pants among those of us who were going out to sea. Without haste, we went along the winding water course until we ended up in the Beagle Channel, with a clear panoramic view of the Chilean side: Navarino Island and, farther up, Picton and Lennox.

The geese and avutardas would fly over the desolate scenery and some sea lions were resting next to several rock cormorant families on an islet.
Fortunately, we were near the shore when the stronger wind began to blow. We walked a short distance up to the Harberton shell. This was the first estancia in Tierra del Fuego and it was built by the Anglican missionary Thomas Bridges in 1886.

The semi-rigid boat that would take us down to isla Martillo (Martillo Island) was already at the pier. This island is the only site in the channel dwelled by a colony of Magellanic penguins. We watched them from the shore but did not get off the boat because it was already noon and lunch was waiting on Gable Island.

At the refuge, the table was ready. Good wine and anecdotes to share with the group were also present. This site keeps its history on the walls that still preserve their original appearance. The old abandoned buildings would be used by the estancia and part of the shearing shed that used to work back in 1900 is still standing.

When we began to feel the drowsiness typical of the siesta hour, Carolina suggested seeing the surroundings. It turned out to be an amusing interpretative hike and we could get to know the natural environment much better. The presence of beavers, which represent a serious problem in the entire ecosystem in Tierra del Fuego, is evidenced in the numerous fallen ñires and the woodlands flooded by the large dams built by these animals. We could also appreciate some vestiges of the Yámana families that co-existed with the Anglican missionaries.

Finally, after a two-hour hike, we reached the pier where the Zodiac was waiting for us in order to take us back to the continent.
The crossing framed by sceneries, history and adventure typical of this region and making visitors feel more and more amazed had come to an end.

Recommendations: This excursion is done from November to mid April. Those who do not wish to paddle may visit the estancia shell. Do not forget to pack an extra pair of socks and to wear a good windbreaker to fight the cold. 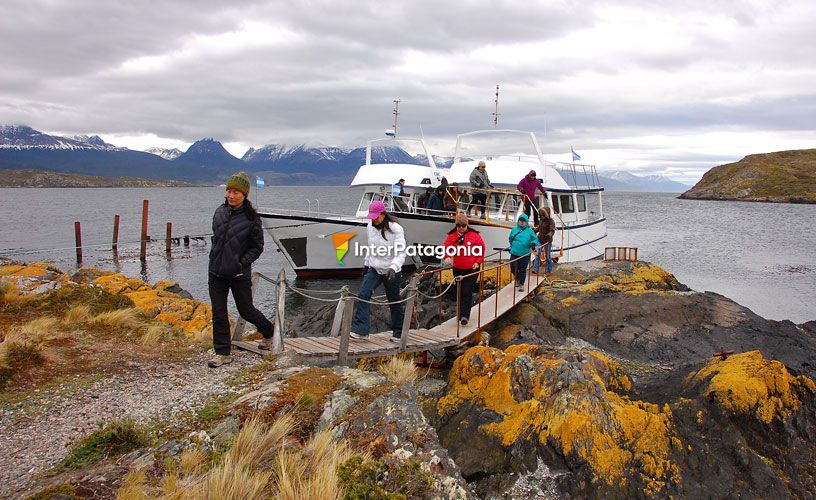 Exploring the Beagle
The surroundings look different from the sea. The sense of contemplation changes and the details previously gone unnoticed appear at first sight.