The inside of the old prison building, where the Maritime Museum works, keeps the tales brought by the sea and the stories of the prisoners that colonized southern Patagonia.

The yellow building of the Naval Maritime Museum would make contrast with the lead-colored morning sky. Facing the bay and inside the Argentinian Navy venue, the hundred-year-old construction was the seat for the Recidivists Prison. For such reason, the Congress declared it National Historical Monument in 1997, because it has been witness to the origins of Ushuaia.

At present, this institution is administered by a non-profit civil association that, with the contribution of the Navy and the local authorities, has managed to rescue and maintain this significant historical testimony open to visitors.

When I entered, the people from the museum gave me an explanatory brochure with some brief instructions and recommended the guided visit that would take place at 11.30am. I took advantage of time to go around the first halls devoted to the naval past of Tierra del Fuego, which, like every southern island, has grown and developed by the sea, its only means of communication with the continent until 1948.

About Vessels and Adventurers

The exploration of these confines date back to the discovery of the American continent by the Spaniards. By the year 1520, Ferdinand Magellan would cross these seas on board a carrack, Portuguese ship previous to the caravels. It was precisely with the replica of this vessel, the Trinidad carrack, that we would begin the tour around the various scale 1:100 model that retrace the steps of all the maritime genealogy of more than 5 centuries.
It was Magellan who called these spots Land of the Fires and the first to sail the strait joining the two oceans, even if the path already appeared in Johan Schöner´s globe (1515) and in the Lopo Homen chart(1519). As from that moment, for over a century, several reckless sailors dared to cross the strait and complete the voyage around the world. Some of them were the famous English pirates Francis Drake, Thomas Cavendish and Oliver van Noort.

The long voyage would continue with the various sea exploits by Spaniards, Frenchmen and Englishmen that would search for new routes on board Dutch hulks such as the Endracht, officered by Schouten and Le Maire, or the Nodal brothers´ caravels, which circumnavegated the Tierra del Fuego island. All the accounts coincide in the harshness of the weather and the violence of the sea, which charged sailors with countless shipwrecks and disappearances.

I strolled about watching these fantastic pieces of naval modelism: Fitz Roy´s Beagle; the Espora brig, owned by the Argentinian sailor Luis Piedra Buena, who built the Luisito cutter with the remains of her shipwreck; the Gardiner sailing-boats, used by the Anglican missionaries, the famous fram that took Amundsen to the southern pole. I walked across the halls devoted to the Sarmiento frigate and to the Montes Cervantes shipwreck, where pictures and the objects rescued from these vessels are exhibited.

I also passed by the area where the museum shows the reproductions of the canoes used by the yámanas, original native community that lived on the sea.

Going around the museum, I discovered the Argentinian Navy vessel called 1 de Mayo. Especially bond to Tierra del Fuego, she was in charge of carrying the first prisoners in 1896. And at this point in history, she was taking me to the prison, right where I was standing.

At the right time for the guided visit, professor Eduardo was waiting for us at Wing 4. But in order to begin with the lecture, he took us to the past, more precisely to the Isla de los Estados. First to the area of the San Juan de Salvamento Lighthouse and then to Port Cook, where the prison was settled in 1896. Nevertheless, in 1902, the inclemencies of the weather and the precarious living conditions forced the authorities to move it to Ushuaia. Thus, with the wooden and tin plates brought from the island, a group of 40 volunteer prisoners, both men and women, some of them suffering from tuberculosis, settled down at Port Golondrina. In the same year, the convicts started to construct the building divided into 5 wings and containing 380 unipersonal cells that once lodged 600 prisoners.

As we were listening in the middle of the corridor, some of us would lean into the cells to imagine what life might have been like in there.

As they entered the prison, which by 1911 was unified with the recidivists jail, the most dangerous convicts in the country would lose their names to a number. Some of them were more famous: the serial killer Mateo Vans, who was called the mystic, Cayetano Santos Godino sadly known as big-eared shorty and anarchist Radowitsky. Afterwards, the politic convicts, such as writer Ricardo Rojas and the mentors of the Revolution of 1955, began to arrive.

Indoors, in addition to strict discipline, the regime impossed elementary schooling and paid labor through 30 labor areas, some of them outside the building. Some of these jobs consisted in forest exploitation works done in the woods. These places were reached by train from the center of the city.

By means of the workshops, the prisoners would cover all needs of the booming city. They built the streets, the bridges and the public buildings and the first printing press, the telephone and electircity, to mention a few essential services, would work inside the prison.
From Wing 4, we went out to the roundabout or central hall and entered Wing 1, the historical Wing. Wing 2, where the library and the art gallery are located, as well as the bakery and the rest of the sections converge into this area, today used for lectures and cultural events.

After the amusing speech, Eduardo invited us to see the replica of the San Juan de Salvamento Lighthouse. Later, some of us returned to Wing 4 to visit the Antarctic Museum located on the top floor.

The prison still keeps many stories and speculations, such as that asserting that Carlos Gardel was once in its cells. Acquainting oneself with its history is diving into the very origins of the city in the times when colonizing southern Patagonia was a daring adventure.
Read complete Outing... / Jorge González

Recommendations: for those people hardly ever affected, the dramatized visit is a must. It is best to go along with a group of people who will play along with the staging. Only suitable for people over 16, these visits are organized on Mondays, Wednesdays and Fridays from 8.15pm. Limited vacancies. 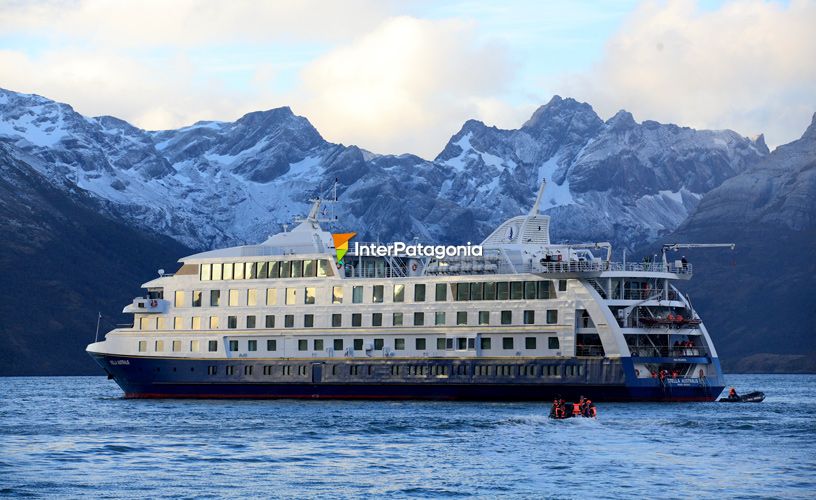 Mare Australis Cruising
We sailed across the channels and fjords of the western coast of Tierra del Fuego. Immersed amidst landscapes of unquestionable solitude and beauty. We reached the southernmost point in the planet: Cape Horn.