The southern right whale watching is a unique magical show at the Valdés Peninsula.

The City of Puerto Madryn is one of the most important and popular tourist destinations on the Patagonian coast. Of course the main show in the area is put up by the famous whales that jump over the water surface with their upright tails to announce their longed-for presence.

We embarked upon an adventure second to none: our aim was to watch the southern right whale. We reached Puerto Madryn at night and checked in at Ty Coed apartment hotel. This is a very comfortable choice where we recovered our energy in order to enjoy the tour to the fullest.

After a hearty breakfast with toast, homemade croissants, milk, sauco jam, and aromatic black coffee, Tito Botazzis team picked us up on a shuttle.

Towards the Valdés Peninsula

The trip had a superb beginning. To one side, the desolate scenery of the pure Patagonian steppe. To the other, the deep blue ocean. Simply impressive.

We headed for the Carlos Ameghino Isthmus, the piece of land that joins the peninsula to the continent. Its narrowest area measures six kilometers. At this point, the two gulfs can be seen, namely: San José (to the North) and Nuevo (to the South). That was our destination.

As we got there, we crossed the entrance to the wildlife reserve and continued up to Puerto Pirámides. The highly coveted expeditions to go whale-watching set sail at this spot. By then, we had already traveled 97 kilometers.

Thousands of tourists from all over the world arrive in southern Argentina to witness the wonderful show presented by these huge cetaceans, which also celebrate their audience.

We got ready for the occasion: we put on our life jackets and waterproof capes. It was a warm day and the eastern wind announced our voyage would not meet our expectations. Anyway, we went out to sea.

In general, the right whales may be watched from June to December, when they come close to the shores of the Nuevo Gulf to mate or bear their calves.

A few minutes later, we set sail and could watch the first specimen. A huge southern right whale delighted us with a splendid elegant jump. Each part of our bodies was thrilled.

Features of the Southern Right Whale

The whales have a curved body and no dorsal fin. The males reach 12 meters of length, whereas adult females may measure from 13 to 16 meters. Adult specimens can weigh between 30 and 40 tons.

The guide explained that their mouth, which is curved, contains some 260 plates or horn-like sheets originally called baleen, from where the Spanish name ballena derives.

We continued sailing and waiting. Suddenly, another whale showed up to greet us. Its tail reached about five meters. Later on, we could watch a mother with its new-born calf. When they are born, they measure five and a half meters and the breastfeeding period lasts as much as their gestation: 12 months.

When these animals are ready to breed, they come back to the Valdés Peninsula area every three years, searching for safe and quiet waters to bear another calf.
Likewise, the guide pointed out that in the upper part of their head, they have some callosities which represent their identification mark. They work just like fingerprints, as they are unique. We found this fact particularly interesting. Behind the callosities, we could see the blowholes, used by the animal to breathe and blow the air from its lungs.

It is important to note that in order to avoid alterations during the mating and breeding periods, the Province of Chubut allows navigation only in the Nuevo Gulf and only to crafts owned by tourist agencies, which must in turn have the corresponding authorization provided by the Prefectura Naval Argentina.

Thus, whale watching is totally regulated in order to protect the integrity of the right whales, declared Natural Monument in the year 1984. There is no doubt that they are a monument to majesty and nature. They offer a show that takes hold of the senses and throws only one result: real pleasure.

Duration: 1 hour and a half.

Timetables: The boats doing this excursion leave from Puerto Pirámides at 10am, 12pm, 2pm and 4pm, approximately.

How to get here: Leaving from Puerto Madryn along Provincial Route 1 and then along Nº 2, the Carlos Ameghino Isthmus is reached after traveling 77 km. From there, the San José and the Nuevo Gulfs are made out. 20 kilometers must be traveled eastwards from the Isthmus to Puerto Pirámides.From Viedma, take National Route 3 towards the South, passing by the Las Grutas crossroad, up to the junction with Route 2, which must be taken heading eastwards up to Puerto Pirámides, and then taking the route described in the paragraph above.

Recommendations: Wear warm clothes, as the area is generally quite windy. It is better to take off some clothes if it is hot, than to feel cold because we are not wearing a jacket or a sweatshirt. On the other hand, we recommend that you wear a waterproof cape, as when the craft gains speed on the high seas, the excursionists may be splayed, especially the ones sitting on the bow. 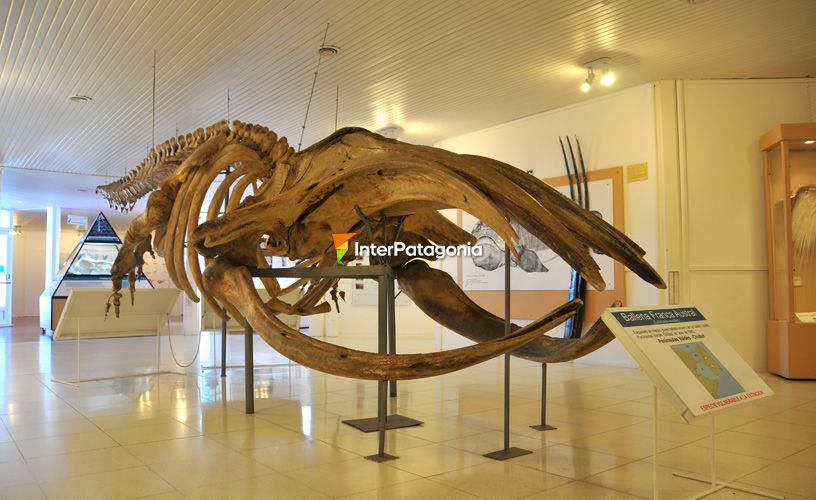 Interpreting Nature on the Valdés Peninsula
We highly recommend that you visit this Museum and Interpretation Center either before or after any kind of animals watching in Península Valdés Natural Reserve in order to get a clear idea of the natural environment you are in.