We sailed across the channels and fjords of the western coast of Tierra del Fuego. Immersed amidst landscapes of unquestionable solitude and beauty. We reached the southernmost point in the planet: Cape Horn.

Had anyone ever told me I would come to see the southernmost region in the planet, I would surely have not believed it. I felt astounded by the very thought of traveling the legendary maritime routes, where the Atlantic and Pacific Ocean mingle with the stories of early sailors, thousands of shipwrecks and the locals from these mysterious and indomitable latitudes. The truth is that I was at the beginning of the end, feeling eager and full of expectations, ready to set out.


After checking in at the agency located in the City of Ushuaia. Whenever we think of cruise ships, we usually relate that word to the image of a comfortable craft crowded with sun-tanned grandparents reading books and playing cards or chess, as they drink daiquiris on deck. That misconception changed when I saw the facilities of the ship and confirmed that, in fact, the Mare Australis is an expedition cruiseship from which Zodiac boats semi rigid motorboats- take passengers to land where they can go on hiking excursions around these indomitable lands hardly toured by the early sailors during the XVII, XVIII and XIX centuries.

The Mare Australis is a 73-meter-long ship that can accommodate 129 passengers. The craft has comfortable cabins nobly decorated with nautical patterns in navy and white, enough room to keep the luggage, a small bathroom, two beds and a large window from where beautiful sights of nature can be caught once the ship abandons the dock.
After unpacking, I resolved to see what would be my floating home for the next couple of days. Very well designed and comfortable, the ship provides all the basic elements to take into account for a pleasant stay, without superfluous elements. Five-decked Mare Australis has an elegant dining-room, two lounges with bar, soft seats and two outside decks ideal for smokers.


The safety lecture was followed by a welcome cocktail, during which we met Captain Juan Reiman, the crew and the expedition guide team. A tango show forced me to remember that we were still in Argentina. The tourists on board, coming from various countries, would burst into applause between one dance and another.
We set sail. Some minutes´ navigation were enough for us to appreciate the City of Ushuaia in all its splendor. We were invited to have dinner at the Patagonia Dining Room, where we were served lunch and dinner during the entire expedition.


With the last moments of sunlight, we retired for the night. The following morning, Cape Horn was awaiting us, with everything that that represented.

During the night, the ship began to swing more violently. Along the Murray Channel, we sailed off the Nassua Bay, the Wollaston and L´Hermite Islands. We approached the mythical cape. The sea, brave in these latitudes, seemed to be possessed by the souls of the castaways that died off this geographic feature. Maybe, they would be rocking the ship with their ghostly hands in order to take us with them I thought. But the Mare Australis endured and everything was soon translated into calm.

Day 2. About the Mythical Cape


At 6 in the morning, we took the early riser´s cup of coffee at the Yámana Lounge. It is always good to eat something before landing, advised Víctor, one of the expedition guides. After getting into the waterproof suits and the boots, we were appointed to a Zodiac boat in order to land on the cape.


We felt like Charles Darwin and his Captain Fitz Roy as they navigated off the small island. It is hard to understand the charm of Cape Horn. At first sight, it seems another island part of the archipelago surrounding Tierra del Fuego. But to tell the truth, this is the southernmost point in the American continent, and it is a decisively critical site for sailors daring into adventure in is waters. There, the large masses of water from the Atlantic and the Pacific Ocean clash, thus generating giant waves and matchless atmospheric phenomena. For sailors, reaching this point can be compared to hitting the summit of Mount Aconcagua for an alpinist.


We landed on solid ground and began to climb along the steep stairs up to the plain area of the island. As quiet as threatening, Cape Horn welcomed us. We went along a wooden path up to the cape monument, represented by an albatross. This monument was founded on December 5, 1992 and pays tribute to all sailors who died in their attempt to find a path off its rocky shores. It welcomes and blesses all living souls standing at its feet.

Shrubby lengas, sour cherry trees and cinnamon trees, bent due to the continuous action of the wind, would spread all around the island. Afterwards, we visited the lighthouse and the post office. A Chilean family that lives there would allow us to contact the rest of the world by letters and stamps for the reasonable price of 5 dollars or euros. Very unconspicuously, I left the post office and got away from the group for a moment. Near the border of the island, I looked into the endless ocean that joined the meditative sky in only one line and, for a few seconds, I felt that I was truly alone in the end of the world...


We slowly abandoned the legendary mythical spot. Silence invaded the scene until we returned to the Mare Australis deck.


We had lots of activities to do on board after breakfast. We could head for the games room, visit the bar, the decks, the bridge or attend the multiple lectures and audiovisual exhibition that would comment on the tour of this expedition cruiseship. Thus, we learnt about the geographical environment we were in and the local flora and fauna. The Mare Australis guides retold the voyages done by Spanish, Portuguese and English sailors, which were an essential part of the discovery and colonization of these lands. They did not forget about the native indians, from whom they rescued their habits, lifestyles and myths. In our minds, we traveled back in time to the years of Magellan, Sebastian Cabot, Sarmiento de Gamboa, and so many others. Soon, we understood the formation of the channels, fjords and glaciers, which turn this route into a unique and mysterious place.


It was lunchtime. I must point out that all the meals served on the Mare are highly diverse and complex. High cuisine was made up by five courses, all of them accompanied by free amounts of Chilean wine. In the afternoons, coffee and hot chocolate accompanied by fine cookies would complete the delicious gastronomic proposal on the ship. We had hardly any time to digest the Magellanic spider crab, the sushi, or the pink salmon in cream, before getting on board another Zodiac boat.


A new disembarkment was announced by the loudspeakers. This time to visit the Wualaia Bay. A place wealthy in stories and legends, which used to be dwelled by Indian peoples. In one of his trips, Fitz Roy took four natives to England. The well-known Jimmy Buttons and Floria Basket were among them. Sea-gulls, cormorants, albatross and other hundreds of birds would escort us during this stage of the voyage.


We were welcomed by a rocky shore which we slowly abandoned to get inland. We went up a steep slope and we found a beautiful panoramic sight of the entire bay. The sun set quickly so we had to turn on our flashlights at the time to go back. Once more, the silence, only interrupted by the squawking of the birds, took hold of the scene.


Waking up. The first beams of sunshine would slip in through the large window. The sea had rocked us the previous night, making us sleep tight until 8.30 in the morning.


We traveled across a labyrinth of channels, such as the Brecknock and Cockburn. The islands were covered with bushes, sheer rocks and some snow-capped peaks. A palette of light and dark greens, greys and whites invaded the line of sight from the upper deck.


After lunch, we began to sail across the Chico Inlet, which would lead us to our destination. With a longitude of 12km, this fjord delighted us with its scenery of rocks eroded by the ice.


Afterwards, we passed by the cold walls of the Plüschow Glacier. The name of this ice colossus commemorates aviator Günther Plüschow, a pioneer in flying over and taking the first air photographs of the Darwin Mountain Range and his aeroplane Cóndor de Plata (Silver Condor).

Some hours later, we got ready to sail on the Zodiacs off the Piloto and Nena Glaciers. This excursion enabled us to watch the entire space occupied by these glaciers. The guide who accompanied us in the Zodiac unveiled some misteries about these frozen giants originated over 50,000 years ago, most of which keep on moving.


Back on board the Mare Australis, hours passed among lectures, documentaries and simple moments of leisure and beholding.


This southern adventure was getting to an end. We discovered the marvelous beauty of these lands of legend, but there still was one more stop to go: the Magdalena Island.


After the early risers´ coffee, we disembarked on the island where one of the most important penguin colonies in America is settled. In this opportunity, we could appreciate only a few specimens, as the rest of the penguins had migrated. We went on a walk to the lighthouse, which at night is turned on to mark the course for sailors. In this natural redoubt, it is possible to watch cormorants, southern seagulls and mammals such as sea lions, as well as penguins.

We went back to the Mare Australis. With the bow heading for the City of Punta Arenas, in Chile, we began to say good bye to the crew and the new friends we have made during the unforgettable voyage.


In a few minutes, the images of everything we had experienced during those days came to my mind: we penetrated the native forest, stepped on the peat moss and touched the ancient ice of the Darwin Mountain Range glaciers. Our bodies endured the winds of Tierra del Fuego. We disembarked and returned to the ship completely satisfied and covered in mud. The lectures took us back in time to the days of the early explorers, those who would dare into the cold and timeless southern waters on board real nutshells.


A feeling of nostalgia would invade me. I had been at the mythical Cape Horn and maybe... only maybe, I would never see it again.
Read complete Outing... Mónica Pons / Gentileza Cruceros Australis

Level of Difficulty: In all cases, the expedition guides will comment on the degree of difficulty of the trekking excursions. There are low, intermediate and high level hikes along the trip.

Recommendations: The Mare Australis has three levels of cabins for accommodation. The difference among them not only lies on where they are located. Accommodation on the top decks is more expensive, as better panoramic sights may be caught from there. As the ship sails across latitudes where the temperatures are low, I recommend that you pack warm clothes such as sweaters, jackets, gloves and hiking boots to be worn during landings. Inside the ship, the temperatures are mild; therefore, I suggest that you wear sport clothes. The rate includes breakfast, lunch and dinner, open bar, daily excursions on land, welcome and farewell cocktails.An aspect to bear in mind is that the cruiseship does not have elevators or other special services for the disabled. 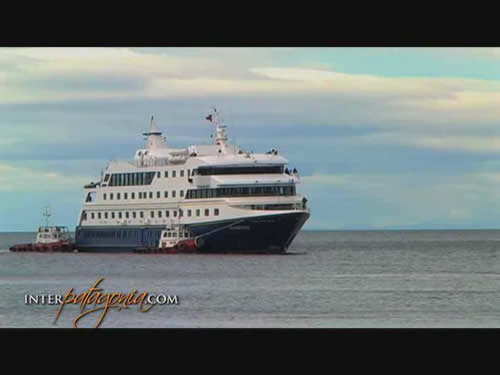