We jumped into an amazing free fall. A true gust of adrenaline took hold of us, while we beheld the Villarica Volcano fumaroles from the air of Pucón.

In Pucón, we dared to do everything. And when I say everything, I also mean the magnificent opportunity of experimenting the feeling of falling freely into the void during thirty seconds

Everything started after reading the article in which the new modality to make parachute jumping was explained. This discipline, which would encourage men to conquer the skies with the simple mass of their bodies, had developed a new way of jumping, known as tandem. The article ended with the names of different locations where you could practice this activity, among them, Pucón was mentioned.

So there we went, totally resolved to live the experience. Pucón is a picturesque city located on the eastern bank of Lake Villarica, surrounded by medium-height mountains. Besides, it is the main seaside resort and tourist destination in the IX Region of Chile

It offers an interesting variety of activities and attractions all year round, which positions it as the "Chilean pearl" at the time of planing the holidays. From the city, you can see beautiful landscapes composed by volcanoes, lakes, hot springs, rivers and forests, ideal for tours or excursions and various adventure sports experiences.

We reached the mountain village and immediately made contact with Peter Vermehren, an expert parachuter with vast experience in this kind of jumps. Peter has been practicing parachuting since 1976. Since the summer of 1996 he has done more than three thousand jumps in tandem for tourist purposes. His company is composed by a team of professionals in charge of arranging everything necessary to perform every jump.

That is how we met Pedro Tomás (Peter's son), Cristian (another instructor in the specialty) and Ulises (the aircraft pilot), who quickly resolved to make our wish come true. We left towards Pucón airdrome.

The flight overall seemed to be tailor-made. Before getting on the aircraft that would take us to the utmost excitement, we had to practice the movements on solid ground. By that moment, the adrenaline was already present in the atmosphere.

Then we completed a waiving of responsibilities form, by means of which we assumed the risk of jumping, even if it was not very high a jump. The parachute used in this new modality is specially designed to bear one thousand jumps. However, Vermeher changes all the lines every three hundred jumps, and he sends the parachutes to the USA to have them made a general maintenance service every five-hundred jumps. Besides, in case of difficulties, there is always an emergency parachute.

Once everything was ready, the aircraft asked for permission to take off in the local airfield. We left the ground. As we gained height, everything was translated into beholding. From the aircraft, we could see the whole lake and the Villarrica volcano, the Trancura River, Lakes Caburgua and Titilco, together with the Huerquehue National Park, and the Mocho, Llaima, Osorno and Lanín volcanoes, on the border with Argentina.

The pleasant trip changed when we reached a seven-thousand-feet height. At that moment, Cristian hooked up his harness to mine. It was still a couple of seconds till we got to the height from where we would jump.

With the Wings of Freedom

At nine thousand feet high, we recalled the movements we had practiced on land and, a few seconds later, we opened the aircraft door. First, we stepped out with our right foot and posed it on the edge of the door. Then, the left foot. We sat on the border of the plane, which was flying at one hundred and eighty kilometers per hour.

I crossed my hands over my chest. Only a countdown was needed for gravity to do its job. An injection of adrenaline started to circulate throughout my body. Three, two, one... we jumped.

Impressive. The endless perspective was multiplied by one thousand. I opened my arms and could hear the instructor's voice saying: "Fly, fly..."

We were falling at a speed surpassing the two hundred kilometers per hour and the strong gusts of air seemed to be sculpting our bodies. The vertigo we reached is very hard to describe. You have to experience it in order to understand it.

As I was falling from the clear Pucón sky, I looked round and had a strange sensation. For the first time in many years, I felt completely free.

Thirty seconds were enough to be born again. Thirty seconds of the inexplicable free fall made me feel it was worth taking such a risk. This kind of experiences, which break with routine, let us be abstracted from reality and get closer to the primitive state of emotion: feeling actually alive.

When the parachute opened, our speed dropped to ten kilometers per hour. At that very second, I comprehended that flying is dominating space. A true hymn to freedom, by which what is really conquered is the state of plenitude of the soul interwoven with nature.

Once we felt comfortable, we only had to enjoy the flight, as an expert instructor was maneuvering the parachute. After five minutes of flying, we touched the ground. Mission accomplished.

The excursion ended on the landing strip of the airdrome when we singularly and softly touched the ground. Brotherly hugs and congratulations seemed never-ending. We had flown the sky of Pucón. Unforgettable, indeed!
Read complete Outing... Marcelo Sola / Sky Dive Pucón

Duration: 1 hour (includes a safety lecture, take-off and the jump itself)

Timetables: arranged in person with the agent.

Recommendations: The people with spine or heart problems should refrain from doing this activity. Minors must be authorized by their parents. 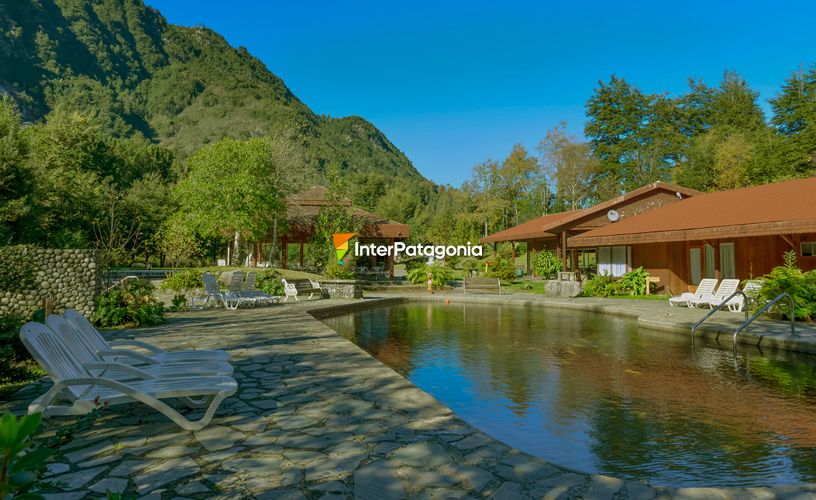 A Place to Rest, Coñaripe Hot Springs
A modern and complete resort, lodated in a privileged thermal nook, invites relax and recreation in a unique natural environment.